President’s Dog, Bo, and Handler Flew Alone in a Separate Plane to Maine-Fiction!

Bo Flew in an MV-22 Osprey on 2013 Vacation to Martha’s Vineyard-Truth!

This is a forwarded email that says when President Obama flew to Maine with his family for their July 2010 vacation but there was not enough room on the plane for the family dog, Bo. It alleges that a separate plane had to be chartered for the First Pooch and his handler.

The President’s dog, Bo, and his handler did travel to Maine on a second aircraft when the First Family travelled there in July 2010 for their Summer vacation, but Bo and handler were not alone.  This eRumor surfaced a year later, in 2011, while the President and his family vacationing in Martha’s Vineyard, 367 miles south of the airport where they landed a year earlier. 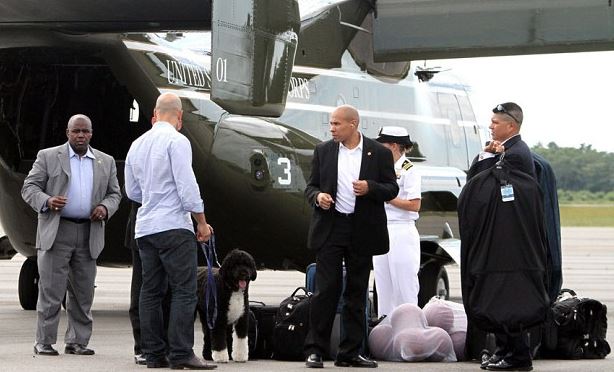 During the President’s 2013 vacation to Martha’s Vineyard, the first pooch once again travel to the vacation spot but this time travelled in class on a MV-22 Osprey. This according to an August 11, 2013 article by England’s The Telegraph.   The article described the Presidential pet’s aircraft as “a hybrid aircraft which takes off like a helicopter but flies like a plane.”

Once again, Bo did not have the aircraft to himself.  According to an August 10th article by CBS News, he travelled with White House Staff, media and Secret Service.


2010 Vacation
The Hancock County-Bar Harbor Airport in Trenton, Maine is a small airport and can not accommodate large aircraft such as the Boeing 747 that the President uses for Air Force One.   For this reason two aircraft were needed for the entire entourage who accompanied the First Family.

Local reporters from the Morning Sentinel of Central Maine were on hand to cover the Obama’s arrival at the Hancock County-Bar Harbor Airport but somehow not all the facts made it in it’s first edition of the local paper.  The original story reported that the first family arrived at the airport in a plane shortly after Bo and his handler were seen exiting another aircraft and left the impression that the dog and handler traveled alone on their own plane.

Some time after the story was released the newspaper added a clarification saying, “Today’s story about the arrival of the Obama’s said the Obama’s dog and one aide arrived on a small jet before the First Family, but there were other occupants on the plane, including several other staffers. The presidential party took two small jets to the Hancock County-Bar Harbor Airport in Trenton because the airport was too small to accommodate the president’s usual jet.”

Doug Powers wrote a commentary on that July 17, 2010 news story that appeared in the Morning Sentinel of Central Maine.  It was then posted on the Michelle Malkin website but went viral on the World Wide Web a year later.

It appears Mr. Powers and Ms. Malkin posted the commentary prior to the Sentinel clarification, which resulted in the massive flood of emails on the Internet about the celebrity canine named Bo.
Posted  09/11/11   Updated 08/11/13