In November 2017, a dubious “health” blog regurgitated a debunked claim about the Diphtheria, Tetanus, Pertussis vaccine (DTaP) and spread it again as “breaking news.”

The vaccine is given to children younger than seven to prevent diphtheria, tetanus and pertussis. And the Centers for Disease Control and Prevention (CDC) has repeatedly stated that there’s no link between vaccines and autism.

However the blog, “InShapeToday.com,” seized on an excerpt from a 2005 information packet published by the vaccine maker Sanofi Pasteur for a post bearing the headline “FDA announced that vaccines are causing autism”: 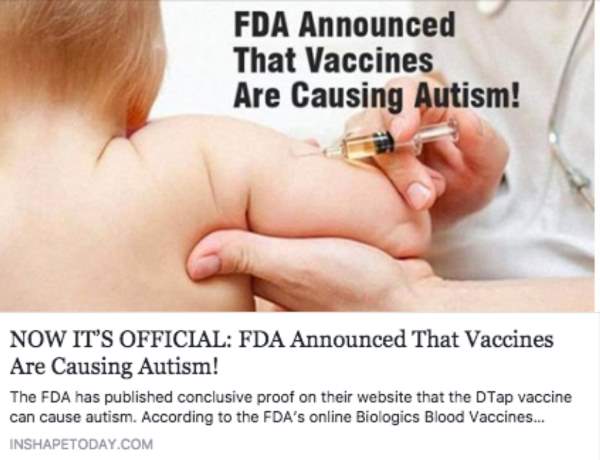 According to the blog, the pamphlet implicated the Tripedia vaccine as being linked to autism:

However that claim omitted the very next sentence in that section of the packet:

Events were included in this list because of the seriousness or frequency of reporting. Because these events are reported voluntarily from a population of uncertain size, it is not always possible to reliably estimate their frequencies or to establish a causal relationship to components of Tripedia vaccine.

Not only was the original claim false, it was outdated by the time “InShapeToday” published it; a spokesperson for Sanofi Pasteur told Politifact that the company had not shipped Tripedia since 2012. Politifact also noted:

Through the federal government’s Vaccine Adverse Event Reporting System (VAERS), anyone can file a report: doctors, patients, family members — and they don’t need proof that the event was caused by the vaccine. Government researchers examine the reports and turn over anything suspicious to outside groups, such as the Institute of Medicine for more research.

Marie McCormick, an expert on child health at the Harvard School of Public Health, told PolitiFact that the reporting system can be gamed.

Predictably, the blog’s false claim was not new; posts making the same bogus argument circulated online in April 2016. And the 2017 iteration was, once again, spread via similarly shoddy blogs.

Update 6/2/21, 3:12 pm: This article has been revamped and updated. You can review the original here.