President Barack Obama took office in January 2009 after a presidential election that was as historic for its voter turnout as it was for his ascension to office as the first black leader of the United States.

Immediately, rumors began to appear about purported changes he was making to the White House and to the nation. These stories were not based in fact, but instead was part of a larger effort to push baseless speculation questioning Barack Obama’s American citizenship and faith to heavily imply (or say outright) that he was either too unqualified or too traitorous to be president.

This particular rumor appears to have been drawn from a report that appeared in the New York Times‘ fashion section which made reference to the Obamas planning a “non-secular Christmas.” The original report was about Desirée Rogers, a corporate executive from Chicago, joining the Obama White House as its social secretary.

In that role, Rogers would orchestrate White House special events and celebrations. Rogers mentioned the Obamas were discussing a “non-secular” Christmas display at the White House during an introductory luncheon:

The lunch conversation inevitably turned to whether the White House would display its crèche, customarily placed in a prominent spot in the East Room. Ms. Rogers, this participant said, replied that the Obamas did not intend to put the manger scene on display — a remark that drew an audible gasp from the tight-knit social secretary sisterhood. (A White House official confirmed that there had been internal discussions about making Christmas more inclusive and whether to display the crèche.)

In the end, the Obama White House displayed the nativity scene. But this was red meat for those looking for ways, no matter how byzantine, to push fake news; rumors that Obama banned the nativity scene, like all the others, persisted throughout his presidency.

In 2015, a disinformation account on social media called “Fox News The FB Page” (which is not affiliated with Fox in any way) reported the story as “breaking news,” deliberately reigniting the controversy: Many stories about the Obamas’ so-called “war on Christmas” have circulated over the years, usually accompanied by heavy innuendo that it was because Barack Obama (and, by extension, Michelle Obama) was a “secret Muslim.” This manifested in bogus claims such as the rumor that the FCC fined ABC for airing a Charlie Brown Christmas special; stories that Obama had refused to deliver Christmas cards to soldiers followed. There were many more, all untrue.

The rumor that Obama banned nativity scenes (or other Christmas traditions or symbols) still persists. President Donald Trump repeatedly has said that he is “ending the war on Christmas” — which has reinforced both the idea that there is some sort of “war” on one of the biggest marketing seasons of the year and that Barack Obama was leading it.

In fact, in October 2017, Trump renewed his commitment to tilting at the “War on Christmas” windmill at the Family Research Council’s annual Values Voter Summit:

We’re getting near that beautiful Christmas season that people don’t talk about anymore. They don’t use the word Christmas because it’s not politically correct. You go to department stores and they’ll say ‘Happy New Year,’ or they’ll say other things and it’ll be red, they’ll have it painted. But they don’t say — well guess what? We’re saying Merry Christmas again.

The rumor received new life in 2018 with posts like these on social media, despite being entirely untrue from start to finish and thoroughly debunked: 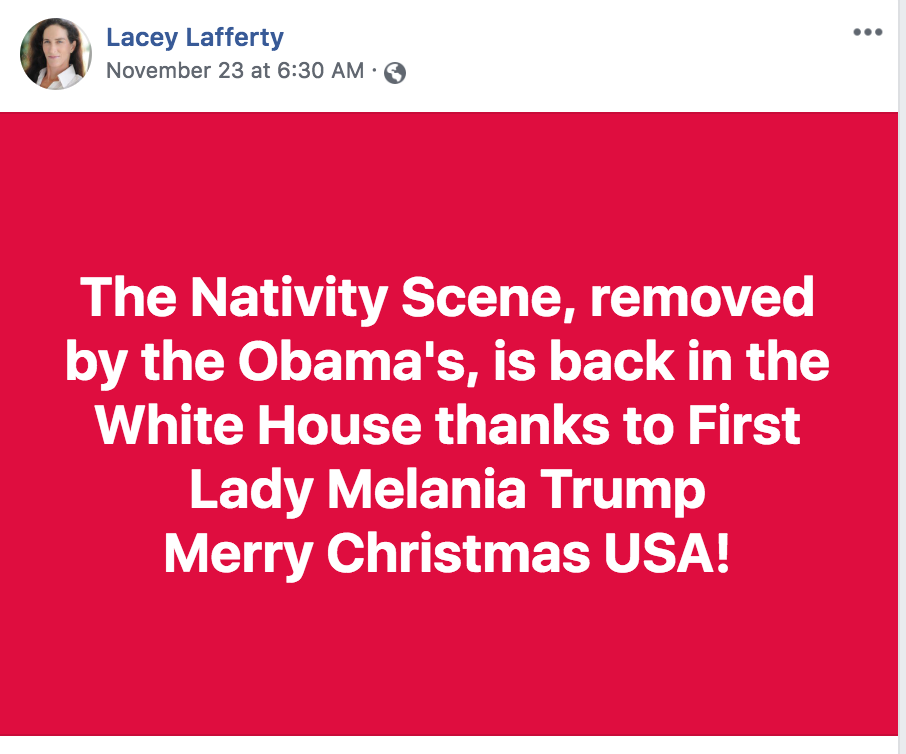 In the end, Obama did not ban nativity scenes at the White House, in the United States, or anywhere else. Despite that, these rumors are likely to persist as long as disinformation purveyors continue to find them highly lucrative.