The picture is of a large number of U.S. jet fighters flying in a formation that spells the letters “USA” and is said to be from an event at Randolph Air Force Base.
The Truth:


We ran the is picture through a process we use at TruthOrFiction.com that detects whether the picture is original and authentic or has had some alterations.  All of the jet fighters in the picture, in our opinion, have been added one-by-one.
Also, we checked with Randolph Air Force base in Texas, and their public affairs office says the picture is not authentic.  No such fly-by took place at Randolph. 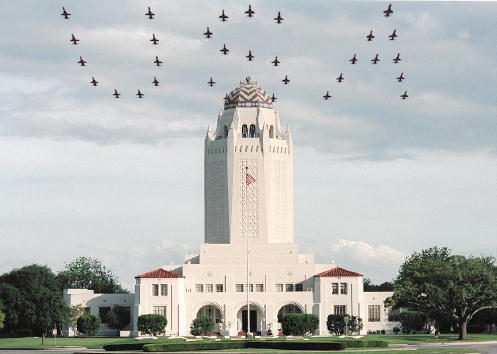 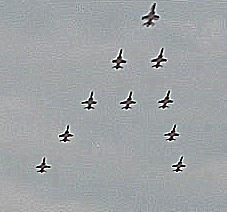 Here is the analyzed version of a portion of the picture.  The lighter color around the jet fighters suggests that they were imported from a different original picture, their perspective was changed, and they were placed in the formation pattern.
Last updated 12/3/02