Summary of eRumor:
Some have said that Adolph Hitler’s slogan, “Make Germany great again,” is very similar to Donald Trump’s campaign slogan, “Make America great again.”
The Truth:
There’s no historical record of Hitler using the slogan “Make Germany great again.”
It’s true that returning Germany to a position of strength in the world was a central them in Nazi propaganda, but that doesn’t mean Donald Trump got the idea to “Make America great again” from Hitler. After all, restoring strength, or making a nation “great” again, is a generic political idea that has been used over and over again throughout history (more on that later).
In reality, Hitler’s campaign was more specific than a general promise of German greatness. Hitler promised to prevent the spread of communism, to break the Treaty of Versailles, to end trade unions, to create jobs, to restore strong central government, and to emphasize moral values, according to the BBC. His propaganda, and slogans, hit on these specific points rather than the general idea of making Germany great again.
Translated into English, some of the best-known Nazi slogans were “work sets you free” and “One people, one empire, one leader.” But propaganda was literally everywhere in Nazi Germany, and it would be impossible to go through every single poster and banner for references to the slogan “Make Germany great again,” especially since that’s such a generic idea.
In reality, Donald Trump borrowed the “Make America Great Again” slogan from modern day conservative heroes, not Hitler. Ronald Reagan used that same exact slogan on a campaign poster in 1980: 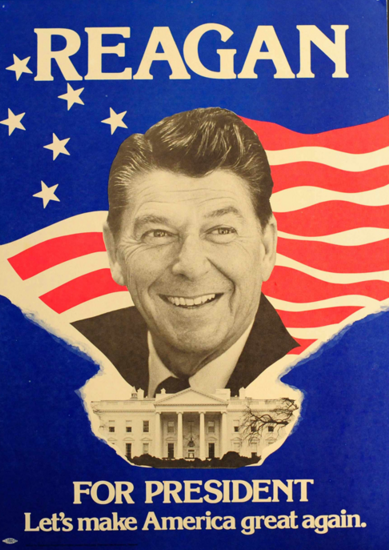 Another conservative icon, Margaret Thatcher used the slogan in the lead up to her election as prime minister of Britain. It was also the theme of her 1950 general election address:

THE first task that awaits the new Government is that of setting the finances of the nation in order. Few people understand all the ‘in and outs’ of economics and national finances, but all of us know only too well that something is very seriously wrong with our country’s economic position. We are at present receiving help from abroad, especially from our American friends, help which amounts to £1 per week for every household. This will end in 1952 and from then on we’ve got to support ourselves. The Socialist Election Manifesto makes no mention of American help at all, and therefore completely fails to face the economic situation, which is the essence of our livelihood. We Conservatives are not afraid to face the future whatever problem it entails, because it is our earnest desire to make Great Britain great again.

So, in conclusion, we’re calling this rumor false for two reasons. First, there’s no record of the specific slogan “Make Germany Great Again” ever being used by Hitler, even though the general idea of restoring German greatness was a common theme. Second, it’s far more likely that Donald Trump borrowed the phrase from Ronald Reagan, who, in turn, borrowed it from Margaret Thatcher.