This is a forwarded email that contains what appears to be a news article that alleged an open microphone caught President Obama saying, “God, this holiday sucks!  All this national pride shit get’s on my nerves.”  The article said that the President was later heard saying, “I can’t believe I have to miss a good day of golf for this crap!”

The Truth:
President Obama made no such comments.  This is a joke poking fun at the President.

The source for this whopper came from a July 4, 2013 article by Duhprogressive.com, a political satire site that likens itself to The Onion. 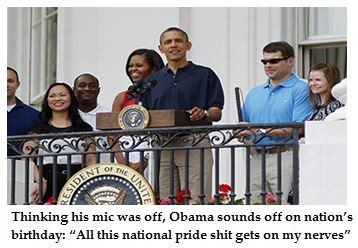