Summary of eRumor:
Actor James Woods has been quoted as saying, “The world is fighting Islamic terrorism, starvation, and disease, but Democrats are fighting for men to pee in the ladies’ room. #insanity”
The Truth:
This “insanity” quote actually came from James Woods.
James Woods tweeted the quote on April 17 in response to a controversial law passed in North Carolina that requires individuals to use bathrooms based on the gender on their birth certificate rather than the gender that they currently identify as: 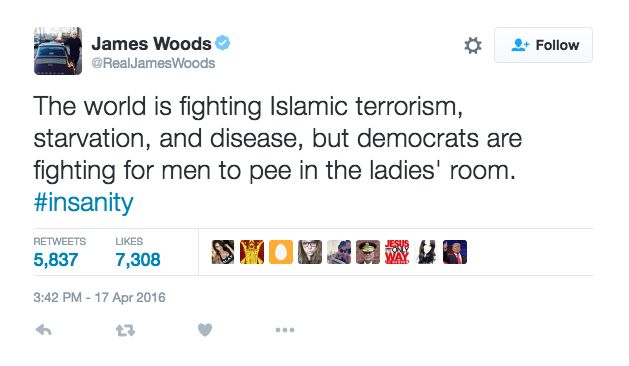 James Woods has emerged as one of the most vocally conservative figures in Hollywood. In 2013, the actor said he didn’t expect to work again because of his outspoken political views that are unpopular in Hollywood, the Washington Times reports:

James Woods, the award-winning actor and outspoken conservative, said Tuesday night that he’s aware he may never work again in Hollywood because of his political views.

“This President is a true abomination. To have barricaded the WW2 vets, but allow illegal aliens privilege,” the 66-year-old Mr. Woods posted to Twitter, linking to a USA Today article.

One fan asked if Mr. Woods was afraid he would be blacklisted in liberal Hollywood.

“I don’t expect to work again. I think Barack Obama is a threat to the integrity and future of the Republic. My country first,” he responded.

Mr. Woods is best known for his roles in “The Onion Field,” “Ghosts of Mississippi” and the legal series “Shark.” He also has voiced roles in episodes of “The Simpsons” and “Family Guy.”

So, this James Woods “insanity” quote actually came from the actor.