A May 2021 post describes the death of police officer Jeffrey Westerfield, using the "Say [Their] Name" social movement associated with Black Lives Matter.

A virally popular May 2021 Facebook post purportedly told the story of Jeffrey Westerfield, identifying him as a police officer who was killed on his 47th birthday and co-opting the “Say Her Name” movement by adding “Say MY Name” to the end of the post.

It included an illustration of a white man and read:

Say MY name. I was shot in the head and killed, on my 47th birthday, while responding to shots fired in a domestic dispute. I was murdered by Carl Le’Ellis Blount, a black male on probation, with outstanding warrants, whose lengthy criminal history, included assault toward both his girlfriend and an officer.

I didn’t have the opportunity to defend myself in any manner. My killer approached me as I sat in my squad car, lights on, engine running, and pulled the trigger. I was left to die, and was later found slumped over the steering wheel.

I was a veteran, and a survivor of Desert Storm. I did not, however, survive serving those in my own community. I was senselessly taken from my four daughters, and my fiancé.

My name is Jeffrey Westerfield, and my life mattered. 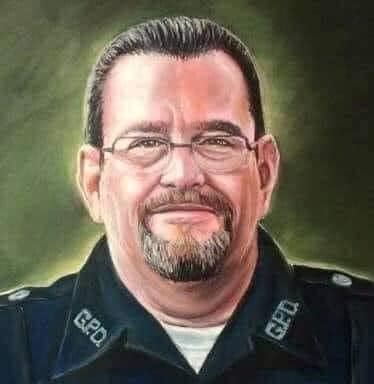 A cursory search for information led to partial news reports, showing us that Jeffrey Westerfield was a real police officer, and he was really shot and killed in his police car — but not in 2021, or even 2020; he was killed on July 6 2014.

Subsequently, WLS-TV in Chicago reported that a man named Carl Le’Ellis Blount was taken into custody on July 6 2014, and he was formally charged on July 24 2014:

Blount was taken into custody July 6 [2014], but not charged until Thursday July 24 2014]. He was being held in Lake County Jail in Crown Point on warrants out of Porter County.

Westerfield was responding to a call of a shot fired in a domestic dispute on July 6 [2014] when Blount, who police say was involved in a fight with his girlfriend, allegedly shot Westerfield.

“What happened can’t be changed, we can’t go back and make this person not do these things,” said Allie Westerfield, the victim’s daughter.

Prosecutors allege Blount shot Officer Westerfield as he sat in his squad car with the lights on and the engine running. The officer, who would have turned 47-years-old that day, never even pulled his weapon before he was shot in the head.

On February 8 2017, Blount was sentenced to life in prison without possibility of parole:

Following the agreement that attorneys struck, Blount was sentenced to life in prison without parole, rather than the death penalty the prosecution had previously requested. The remaining charges against him were dropped, which included intimidation, carrying a handgun without a license, battery and theft, as well as his probation revocation case.

The May 22 2021 Facebook post made no mention of the fact that Westerfield’s death was nearly seven years before, nor did it mention that Blount was arrested the very same day.

We located an identical post with the same artistic rendering of Jeffrey Westerfield shared on September 17 2020, following a summer of Black Lives Matter protests prompted by the murder of Minneapolis man George Floyd — hinting that the post was intended as an “answer” to widespread protests objecting to police misconduct.

Commenters asked whether anyone had “protested” the death of Jeffrey Westerfield, an allusion to then-ongoing protests across the United States — and globally — over Floyd’s murder at the hands of a law enforcement officer:

Did anyone demonstrate against this young mans murder.Bet not, condolences to the family.

Comments about protests were chronologically relevant, as Westerfield was killed on July 6 2014. The Black Lives Matter movement began in response to the 2012 murder of Trayvon Martin and the 2013 acquittal of his killer.

A Timeline of the Black Lives Matter Movement, and Why it Came to Be

However, the summer of 2014 was when Black Lives Matter transitioned from a response to Martin’s death and the ensuing failure to convict his killer to a sustained human rights movement:

[On] July [17 2014], Eric Garner died in New York City, after a New York City Police Department officer put him in a banned chokehold while arresting him. Garner’s death has been cited as one of several police killings of African Americans that sparked the Black Lives Matter movement.

During the Labor Day weekend in August, Black Lives Matter organized a “Freedom Ride”, that brought more than 500 African-Americans from across the United States into Ferguson, Missouri, to support the work being done on the ground by local organizations. The movement continued to be involved in the Ferguson unrest, following the death of Michael Brown. The protests at times came into conflict with local and state police departments, who typically responded in an armed manner. At one point the National Guard was called in and a state of emergency was declared.

Chronologically, Westerfield was killed on July 6 2014. On July 17 2014, New York City man Eric Garner was killed by a policeman’s chokehold, and in August 2014, 18-year-old Mike Brown was shot and killed by a law enforcement officer in Ferguson, Missouri.

The Black Lives Matter movement was galvanized from intermittent protests to a widespread, sustained effort by the events of summer 2014. The deaths of Garner and Brown sparked huge protests in July and August 2014, demonstrations that continued for a specific reason which was nowhere to be found in the May 22 2021 post about Jeffrey Westerfield.

Protests over Garner’s and Brown’s respective deaths occurred not because the men were (like Westerfield) killed, a point the Facebook post either failed to notice or elected not to mention. The post did not indicate that a suspect was taken into custody on the same day Westerfield died (July 6 2014), a man who was later convicted and sentenced to life in prison without the possibility of parole.

The deaths of Garner and Brown led to protests because the individuals responsible for their deaths were not indicted:

Thus far, a number of inconsistent or ahistorical factors were evident in the posts — Jeffrey Westerfield’s death occurred chronologically just prior to the events that galvanized the Black Lives Matter movement in July and August 2014. Additionally, a suspect (Blount) was arrested on the very same day Westerfield was killed, while protests occurred due to a lack of arrests or indictments in the deaths of Garner and Brown.

‘Say MY Name … My Name is Jeffrey Westerfield, and My Life Mattered’

Another indicator the post was seen as a response to the George Floyd protests in the summer of 2020 and to the Black Lives Matter movement overall was its “say MY name” phrasing.

“Say Her Name” or #SayHerName refers to Black women who are killed by police officers or in racially motivated incidents, and it first appeared after the July 2015 in-custody death of Sandra Bland:

#SayHerName is a social movement that seeks to raise awareness for black female victims of police brutality and anti-black violence in the United States.[1] Black women are 17% more likely to be stopped by police and 1.5x more likely to be killed than their white counterparts. #SayHerName aims to change the public perception that victims of police brutality and anti-black violence are predominantly male by highlighting the gender-specific ways in which black women are disproportionately affected by fatal acts of racial injustice. In an effort to create a large social media presence alongside existing racial justice campaigns, such as #BlackLivesMatter and #BlackGirlsMatter, the African American Policy Forum (AAPF) coined the hashtag #SayHerName in February 2015.

The Facebook post about Westerfield began with “Say MY Name,” co-opted from the Black Lives Matter-adjacent “Say Her Name” movement, and it concluded with “… and my life mattered,” a clear reference to Black Lives Matter.

Not to put too fine a point on it, but the Black Lives Matter movement started after a man who shot a teenaged boy (17-year-old Trayvon Martin) in 2012 was not immediately arrested, and again when the man was acquitted.

The movement began in its more current form when, once again, the individuals who killed Eric Garner and Mike Brown were not indicted. The man convicted in Westerfield’s murder was arrested the very same day he died, and that person was indicted the same month (July 2014). He was convicted and sentenced to life in prison.

Jeffrey Westerfield was a police officer killed in the line of duty on July 6 2014, and a May 22 2021 viral post made no effort to clarify that his death occurred nearly seven years previously. An early version of the post made it clear it was written in response to the George Floyd protests — protests attached to a movement with the objective of protesting the deaths of Black people at the hands of law enforcement, and the absence of indictments. Westerfield died before the high-profile deaths of Garner (July 2014) and Brown (August 2014), and in many ways, before the establishment of Black Lives Matter as we know it in 2021. Even if Westerfield was killed after Garner and Brown, a suspect was arrested the same day he died. To put it another way, deaths that led to protests were, until the April 2021 conviction of George Floyd’s murderer, deaths in which justice was not served — in Westerfield’s case, an arrest occurred immediately, and the suspect was convicted and imprisoned for life.