This is a forwarded email that contains an article that alleges that the Presidential nominee to head the Central Intelligence Agency, John Brennan, is a convert to Islam.
The Truth:

We have not found any evidence that John Brennan is a Muslim.
The article is real and appeared on the World Net Daily website on February 10, 2013  It contained allegations by former FBI Islam expert John Guandolo, which said that John Brennan is a Muslim Convert.
The article said that during a radio interview Guandolo said, “Mr. Brennan did convert to Islam when he served in an official capacity on the behalf of the United States in Saudi Arabia.”
If Brennan converted to Islam, nobody told the Muslims, according to a February 12, 2013 article in U.S. News & World Report citing the communications director of the Council on American-Islamic Relations, Ibrahim Hooper, who told the reporters “that he has no knowledge of Brennan converting to Islam.”
The article went on to call World Net Daily “a website that specializes in reporting on conspiracy theories.”   Hooper also said that “his group opposes Brennan’s nomination, largely because of his role in operating the CIA drone program that targets terrorists but has also killed civilians.” 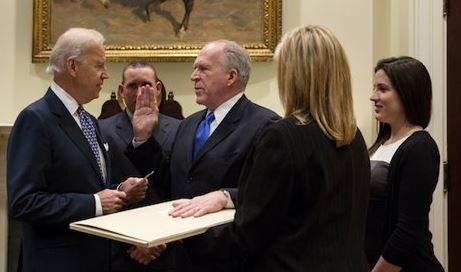 Shortly after Brennan was confirmed by the U.S. Senate, Vice President Joe Biden administered the oath on March 8, 2013.  Instead of placing his hand on a Bible, Brennan swore his oath on a draft of the U.S. Constitution that contained the handwriting of George Washington.  This according to a March 13, 2013 article by Yahoo News that said that he requested a “document from the National Archives that would demonstrate the U.S. is a nation of laws.”  The article also said, that Brennan told President Obama “that he made the request to the archives because he wanted to reaffirm his commitment to the rule of law as he took the oath of office as director of the CIA.”    This draft did not contain the Bill of Rights.