Far-right conspiracy theorists began circling in May 2021 around a study “pre-print” they claimed vindicated their refusal to wear face masks to blunt the spread of the COVID-19 pandemic.

The study, posted in the journal BioRxiv (pronounced “bio-archive”) by researchers at the University of Louisville, states:

Results Case growth was not significantly different between mandate and non-mandate states at low or high transmission rates, and surges were equivocal. Mask use predicted lower case growth at low, but not high transmission rates. Growth rates were comparable between states in the first and last mask use quintiles adjusted for normalized total cases early in the pandemic and unadjusted after peak Fall-Winter infections. Mask use did not predict Summer 2020 case growth for non-Northeast states or Fall-Winter 2020 growth for all continental states.

Predictably, the post was recirculated as a meme mocking mask mandates, as well as blog posts, some of which — also predictably — made use of Sinophobic conspiracy theories: 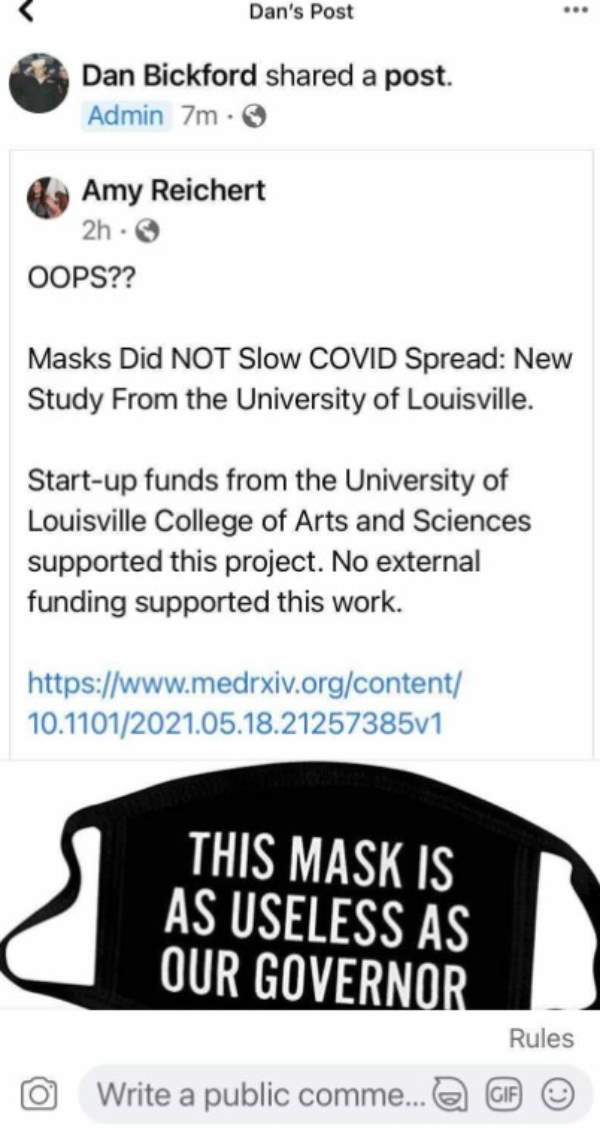 While the study itself does exist, those spreading the story ignored a very clear disclaimer accompanying it on MedRxiv:

This article is a preprint and has not been peer-reviewed. It reports new medical research that has yet to be evaluated and so should not be used to guide clinical practice.

The site further informs readers that they should know that “articles on medRxiv have not been finalized by authors, might contain errors, and report information that has not yet been accepted or endorsed in any way by the scientific or medical community.”

And BioRxiv adds a further disclaimer for outlets looking to cover pre-prints:

We also urge journalists and other individuals who report on medical research to the general public to consider this when discussing work that appears on medRxiv preprints and emphasize it has yet to be evaluated by the medical community and the information presented may be erroneous.

The site’s co-founder, Dr. John Inglis, has specifically cautioned journalists not to cover this type of research on diseases like COVID-19 without the adequate background. In April 2020 he told Harvard University’s Journalist’s Resource:

Don’t go near it if you are not a science journalist. Avoid the practice of ‘churnalism,’ where you end up reporting on other news stories and controversies rather than hard fact. Ask whether the conclusions [of a research paper] are contrary to everything else that we think we know — and remember that anything very surprising is usually wrong.

A month later journalist Wudan Yan — who studied for a doctoral degree in cancer biology prior to becoming a reporter — told us:

Journalists should not cover pre-prints unless they have thoroughly vetted them. Pre-prints exist on those group servers and are published with a lot of academic jargon and that’s because they are meant for other scientists. I cannot stress this enough: pre-prints are for other researchers to verify, validate, [or] study further. They’re not for journalists to cover. Journalists don’t have the expertise, and if we wish to cover them, we need to get the expertise from outside critics.

Per MedRxiv’s advice, we are not commenting on the Louisville study itself, other than to note that it does run counter to work that has already been peer-reviewed. For instance, a study published in the journal Health Affairs in June 2020 found that found that states where mask mandates were enforced “had a greater decline in daily COVID-19 growth rates after issuing these mandates compared with states that did not issue mandates.”

That study, which tracked COVID-19 growth rates in 15 states and the District of Columbia between March 31 and May 22, 2020, was cited in a Centers for Disease Control and Prevention (CDC) report published in March 2021. “Mask mandates and restricting any on-premises dining at restaurants can help limit community transmission of COVID-19 and reduce case and death growth rates,” the CDC’s report stated.

The Louisville study — which drew on data from both the CDC and the Institute for Health Metrics and Evaluation at the University of Washington — states, “Earlier studies have not compared COVID-19 case growth rates in states with and without mandates, and effects of compliance (proportion of people masked) are not clear,” which seemingly omits the work published in Health Affairs.

Dr. Damian Guerra, who is listed as the lead author on the Louisville study, sent us a statement saying:

We have submitted our work to a journal, and we have received peer reviews. Timeline to completion is hard to estimate for any study I have published on any topic. In the meantime, we hope our preprint stimulates productive and respectful conversation.