Summary of eRumor:
A meteor will strike off the coast of Puerto Rico in August 2016, sending a tsunami toward America’s Gulf Coast.
The Truth:
There’s no truth to claims that an asteroid will hit Puerto Rico in August 2016.
NASA’s Jet Propulsion Laboratory, which mans NASA’s asteroid surveillance program, did report any unusual meteor or asteroid activity in August or September 2016. The closest approach, listed in the chart below, was an asteroid expected to pass 3.3 million miles from Earth on August 25th: 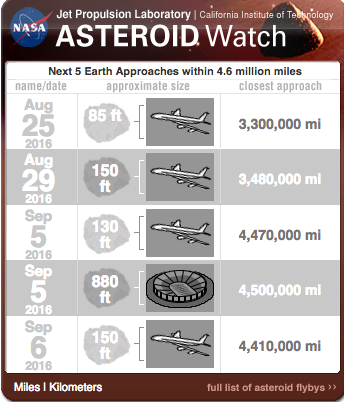 A full list of asteroid flybys through early October 2016 can be viewed here. Again, the list doesn’t show anything out of the ordinary.
Earliest references to a meteor striking off the coast of Puerto Rico appeared to come in March 2014 in a YouTube video posted at channel operated by USA Times, a self-described “UFO channel.” The video warns that the meteor’s impact will trigger a tsunami that devastates America’s Gulf Coast and effectively initiates the Rapture.
Those doomsday prophecies are similar to another end-times prediction for September 2015 that didn’t come true. In that version, which didn’t give a specific location for the meteor strike, doomsday predictors also claimed that an asteroid would strike Earth, “destroy” civilization and bring about the Rapture.
That prophecy obviously didn’t come true — but it generated enough panic that NASA responded directly with a statement, “The Probability of Collisions with Earth,” that found the probability to be quite low:

NASA knows of no asteroid or comet currently on a collision course with Earth, so the probability of a major collision is quite small. In fact, as best as we can tell, no large object is likely to strike the Earth any time in the next several hundred years. To be able to better calculate the statistics, astronomers need to detect as many of the near-Earth objects as possible. It’s likely that we could identify a threatening near-Earth object large enough to potentially cause catastrophic changes in the Earth’s environment, and most astronomers believe that a systematic approach to studying asteroids and comets that pass close to the Earth makes good sense. It’s too late for the dinosaurs, but today astonomers are conducting ever-increasing searches to identify all of the larger objects which pose an impact danger to Earth.

So, like previous false alarms about meteors and asteroids destroying the planet, this one has not merit.