Summary of eRumor:
During her speech at the Democratic National Convention, First Lady Michelle Obama said that slaves built the White House.
The Truth:
Michelle Obama’s claim that slaves built the White House is true.
During her speech on the opening night of the 2016 Democratic National Convention, Michelle Obama was discussing the significance of Hillary Clinton becoming the first female presidential nominee for a major political party when she said:

That is the story of this country, the story that has brought me to this stage tonight, the story of generations of people who felt the lash of bondage, the shame of servitude, the sting of segregation, but who kept on striving and hoping and doing what needed to be done so that today I wake up every morning in a house that was built by slaves.

And I watch my daughters, two beautiful, intelligent, black young women playing with their dogs on the White House lawn.

Construction on the President’s House began in 1792 in Washington, D.C., a new capital situated in sparsely settled region far from a major population center. The decision to place the capital on land ceded by two slave states-Virginia and Maryland-ultimately influenced the acquisition of laborers to construct its public buildings. The D.C. commissioners, charged by Congress with building the new city under the direction of the president, initially planned to import workers from Europe to meet their labor needs. However, response to recruitment was dismal and soon they turned to African American—enslaved and free—to provide the bulk of labor that built the White House, the United States Capitol, and other early government buildings.

Stonemason Collen Williamson trained enslaved people on the spot at the government’s quarry at Aquia, Virginia. Enslaved people quarried and cut the rough stone that was later dressed and laid by Scottish masons to erect the walls of the President’s House. The slaves joined a work force that included local white laborers and artisans from Maryland and Virginia, as well as immigrants from Ireland, Scotland, and other European nations.

The White House Historical Association went one step further and posted a payroll to slaveowners that “shows the government did not own slaves, but it did hire them from their masters” to build the White House: 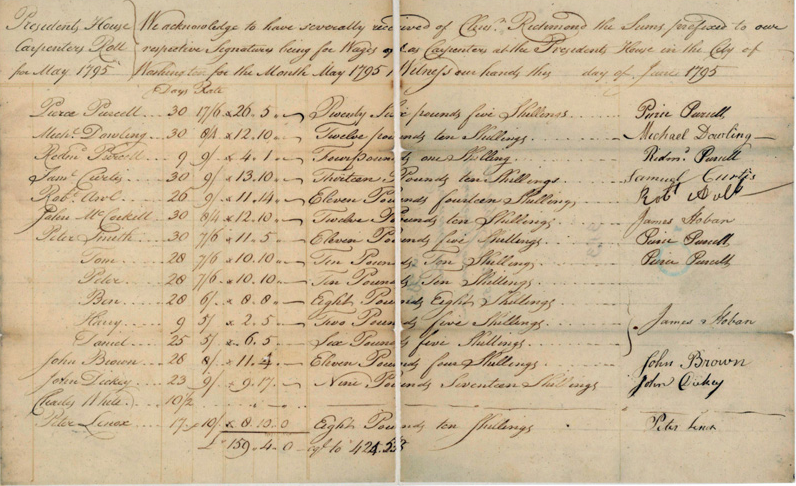 Of course, the original “president’s house” didn’t stand long. British invaders took control of Washington, D.C., for 26 hours in 1814 and burned down nearly all of the public buildings there, including the original White House. Remains of the fire that destroyed the original president’s house, as it was called, can still be seen today, the White House Historical Association reports:

After a night and a day of torching nearly all of the public buildings, and even a few private businesses, including ropewalks, which sent billowing clouds of choking black smoke over the capital, the British withdrew to their ships, afraid that their path of retreat might by blocked by American troops. The occupation of Washington by British troops lasted about twenty-six hours, but evidence of their vandalism survives to this day. Some of the blocks of Virginia sandstone that make up the original walls of the White House are clearly defaced with black scorch marks. They are the indelible strains from the fires of 1814.

President James Madison immediately set out to rebuild the White House exactly as it was, and he hired the original architect, James Hoban, to oversee its reconstruction from 1814-1817, the White House Museum reports:

When restoration was completed in 1817 under President James Monroe, it was furnished in fashionable style, some of which remains today in the Blue Room. He ordered a suite of French mahogany furniture through the American firm Russell and La Farge, with offices in Le Havre, France. However, the firm shipped gilded furniture instead, asserting that “mahogany is not generally admitted into the furniture of a Salon, even at private gentlemen’s houses.” Eight pieces of the original suite can be seen, including a bergère, an armchair with enclosed sides. A gilded bronze clock also remains.