A viral video shows offended Muslims attacking a Christmas tree at a mall in Sweden.

The posts pushed the claim that they had discovered footage of Muslims vandalizing a Christmas tree inside a shopping mall, with characteristically incendiary language:

Ahh, the religion of peace and tolerance. Whenever Muslims move to Western nations they try to change everything about the culture to conform to sharia law. When they’re not doing that, they’re tearing down Christmas trees, because, Jesus, birth of the Son of God and all that. To them, Jesus is only a prophet, to Christians, He is God’s only son born of a woman. 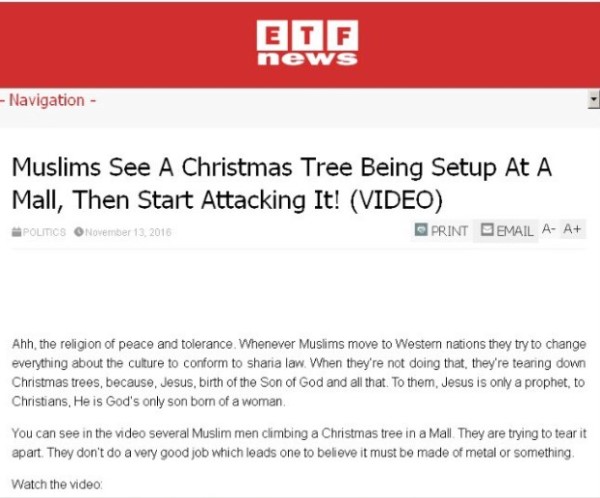 The video was quickly aggregated by other fringe websites that have been linked to fake news reports, and the mislabeled video of the mall Christmas tree was viewed hundreds of thousands of times by people who believed it actually showed “offended Muslims” attacking a mall Christmas tree in Sweden or a “western nation.”

In reality the video, originally posted in January 2016, was taken at the Mall of Arabia Cairo in Egypt during a “tree plundering” event — a Christian tradition dating back to the 1800s. The celebration, also known as a “Knut’s party,” is reportedly held to mark the end of the Christmas season every January 13th. Ornaments are stripped from the tree, and edible decorates like candy and fruits are eaten — which appears to be what the video in question shows.

The video clearly shows women and children taking ornaments from the tree while people wearing Santa hats and whistling look on. The video clearly doesn’t show angry Muslim men attacking the Christmas tree out of anger, as has been claimed.