"NASA has outdone themselves, this is an image of the entire observable Universe. This is incredible. #NASA" 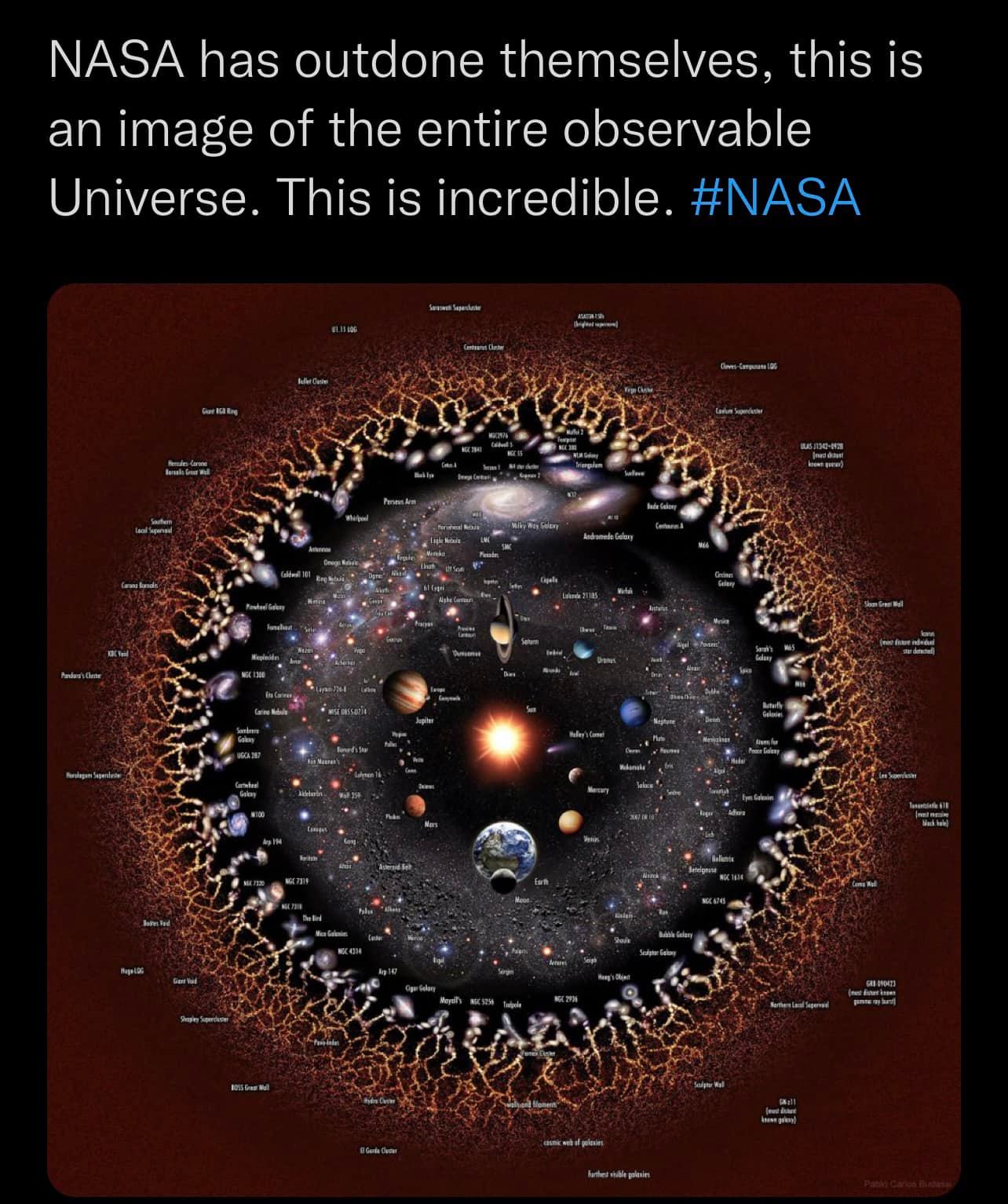 NASA has outdone themselves, this is an image of the entire observable Universe. This is incredible. #NASA

Search quickly turned up the tweet shown in the screenshot. It was originally shared on March 16 2022, and it racked up engagement on Twitter, too:

NASA has outdone themselves, this is an image of the entire observable Universe. This is incredible. #NASA pic.twitter.com/v8AFvZPkEY

‘Most Detailed Image of a Human Cell’

In contrast with the thousands of “likes” on the tweet embedded above, a second tweet by the same account in the thread had 22 likes on March 25 2022. It was added on March 20 2022, and read:

Credit for this incredible image goes to @budassiuniverse 👏 Thank you

Clicking through to the tagged account led to a pinned September 2021 tweet about NASA’s purported “entire observable universe image”:

New updated link to explore this infographic or get a print: https://t.co/RmuCUFSF51

THE CELESTIAL ZOO is a tour of 210 places of interest in our Universe, describing each landscape with curious facts that are a must-know when planning our trips through the Cosmos. Featuring the most bizarre galaxies, stars, planets, and other weirdos of all colors and shapes, the information contained is updated as of February 2021.

The circular view of the universe in the middle was assembled by Pablo Carlos Budassi by combining logarithmic astronomical maps from Princeton University and images from NASA.

On March 16 2022, NASA featured Budassi’s illustration as one of its “Astronomy Picture of the Day (APOD)” posts. Additional information identified the image as an illustration created by Budassi, adding:

Explanation: How far can you see? Everything you can see, and everything you could possibly see, right now, assuming your eyes could detect all types of radiations around you — is the observable universe. In light, the farthest we can see comes from the cosmic microwave background, a time 13.8 billion years ago when the universe was opaque like thick fog. Some neutrinos and gravitational waves that surround us come from even farther out, but humanity does not yet have the technology to detect them. The featured image illustrates the observable universe on an increasingly compact scale, with the Earth and Sun at the center surrounded by our Solar System, nearby stars, nearby galaxies, distant galaxies, filaments of early matter, and the cosmic microwave background. Cosmologists typically assume that our observable universe is just the nearby part of a greater entity known as “the universe” where the same physics applies. However, there are several lines of popular but speculative reasoning that assert that even our universe is part of a greater multiverse where either different physical constants occur, different physical laws apply, higher dimensions operate, or slightly different-by-chance versions of our standard universe exist.

On March 16 2022, a tweet saying, “NASA has outdone themselves, this is an image of the entire observable Universe. This is incredible” received widespread attention, sharing NASA’s APOD. NASA indeed shared the image, crediting illustrator Pablo Carlos Budassi as its creator. Budassi’s original post explained that the illustration was created by combining “logarithmic astronomical maps from Princeton University and images from NASA.” Although the finished infographic was striking, interesting, and shared by NASA, it was not an “image of the entire observable universe,” nor was it labeled as such by NASA.