Summary of eRumor:
Reports allege that the U.S. Navy has released a directive ordering the removal of Gideon-placed Bibles from every hotel room located on Navy bases.
The Truth:

The directive was real, according to an August 11, 2014, article by Fox News but the decision to reverse them was reversed. According to an August 15, 2014, follow up article by Fox News, “A Navy spokesman confirms that Bibles will be returned to base lodges, and they’ve also launched an investigation to determine why God’s Word was removed from guest rooms in the first place.”

Reporter Todd Starnes contacted a Navy Exchange Service Command (NEXCOM) spokesperson, Kathleen Martin, but was unable to get a concrete answer if this directive calls for the removal of bibles placed in rooms by the Gideon Society. Martin told Starnes the Navy lacked a consistent policy, and the new directive would affect about 40 lodges on military bases world-wide.

The directive said religious items are to be considered as lost and found items. According to an August 12, 2014, article by the Washington Post, Marin said that the directive “allows religious materials to be made available to guests,” but they may not be left in the rooms.
News of this directive was made public by the American Family Association (AFA), a Christian advocacy group that reports on activity contrary to Judeo-Christian values.
The group is notifying its subscribers and suggesting that they contact Rear Admiral Robert. J. Bianchi to urge “him to reverse the decision to remove Gideon Bibles from base hotel rooms.“ AFA also suggested contacting NEXCOM Vice President Michael Bockelman, who approved the directive. 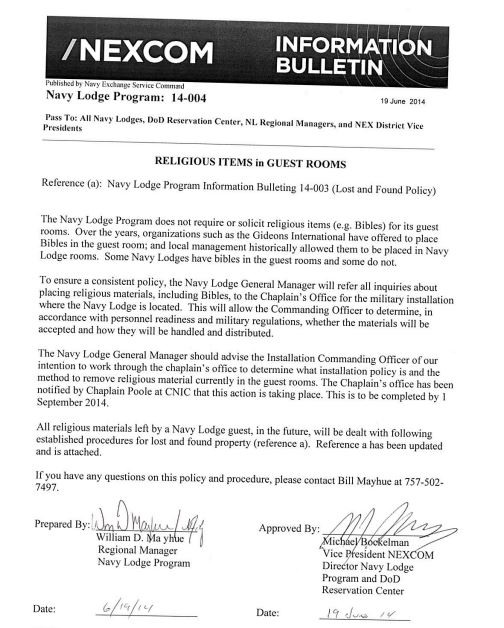 Image of U.S. Navy Directive found on AFA website
The TruthOrFiction.com team has a call into NEXCOM and will post additional findings here when we get them.
Posted  08/12/14