Many of the artificially-organized right-wing attacks on Barack Obama’s presidency sought to paint him as being “unpatriotic.” Case in point, a copypasta meme that surfaced in late 2009.

In this case, the outrage revolved around a photograph of Obama flanked by military personnel, falsely described as being taken at a Veterans’ Day ceremony at Arlington National Cemetery in Virginia: 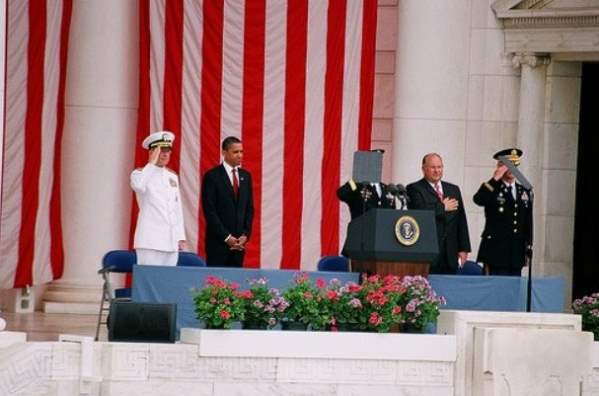 I don’t know whether the National Anthem is being played, or the Flag is going by, or WHAT, but EVERYBODY in the picture is either saluting or has his hand over the HEART. All except ONE. Guess who? Is he an American? Pictures don’t lie – see for yourself! Obama is a self-centered Jerk! HAVEN’T WE SEEN THIS BEFORE???????????

Other versions of the post, spread via chain emails, suggest that the photo was taken during the Fort Hood Memorial Service after the attack on the US Army Base that year.

In reality, the photograph was taken months earlier during a Memorial Day ceremony at Arlington. Footage of that event aired on CSPAN shows Obama wearing a red tie; his entrance can be seen about 11 minutes into the broadcast.

Michael Robert Patterson, webmaster for the website arlingtoncemetery.net, further confirmed to us that the photograph was taken as Obama took the podium, while being saluted. The venue’s superintendent, John Metzler Jr., can also be seen in the photograph with his hand over his heart, which Patterson said was his customary salute to the president during these types of events.

Obama and his vice president, Joe Biden, did attend a Veterans’ Day memorial that year at the same venue, but the president actually wore a blue tie: 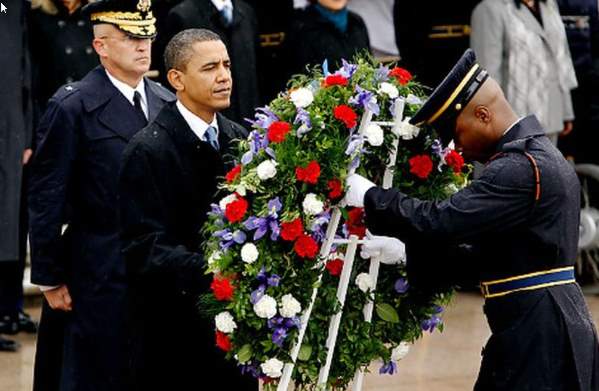 Earlier at this national burial ground for war heroes, Obama placed a wreath at the Tomb of the Unknowns. Wearing a black raincoat, the president place a flower-laced wreath on a stand and stood over it silently for several moments. He placed his hand on his heart as a bugler played taps.

In customary fashion, however, the right-wing disinformation against Obama recycled content to use in similar attacks against not only him but First Lady Michelle Obama.