In 2015, a photograph with an inspiring description cropped up on social media and image sharing sites: 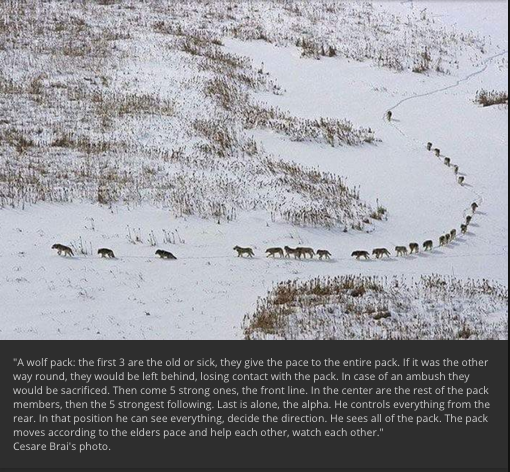 It shows several wolves walking in a single file line through a snow-covered wilderness with the following caption (or variations thereof):

A wolf pack: the first 3 are the old or sick, they give the pace to the entire pack. If it was the other way round, they would be left behind, losing contact with the pack. In case of an ambush they would be sacrificed. Then come 5 strong ones, the front line. In the center are the rest of the pack members, then the 5 strongest following. Last is alone, the alpha. He controls everything from the rear. In that position he can see everything, decide the direction. He sees all of the pack. The pack moves according to the elders pace and help each other, watch each other.

That makes for a compelling story (with remarkable staying power) about teamwork and community caring — but it is completely untrue.

This photograph is from BBC’s Frozen Planet series in 2011. It shows timber wolves hunting bison in Wood Buffalo National Park in Canada. One wolf led the pack and the others followed in a single file line to save energy as they made their way through deep snow:

A massive pack of 25 timberwolves hunting bison on the Arctic circle in northern Canada. In mid-winter in Wood Buffalo National Park temperatures hover around -40C. The wolf pack, led by the alpha female, travel single-file through the deep snow to save energy. The size of the pack is a sign of how rich their prey base is during winter when the bison are more restricted by poor feeding and deep snow. The wolf packs in this National Park are the only wolves in the world that specialise in hunting bison ten times their size. They have grown to be the largest and most powerful wolves on earth,

Wolf packs are typically about half the size of the pack pictured in the photo from 2011. Most packs do not hunt prey the size of bison, but a larger pack is able to do so — and the wolves walking in a single file line through deep snow is a classic example of how they are able to use weather conditions to their advantage while hunting prey that is much larger than they.

The idea that wolves have to be on the lookout for ambushes or attacks isn’t true, either. Wolves are at the top of the food chain and have no natural predators. Aside from turf battles with other wolves, bears and mountain lions are among the few threats to wolves. (The largest threat to wolves, as with so many other species, is humans.) Even so, experts say that bears are able to prey only on wolf pups or the sickly, because grown wolves are too fast, swift and clever to get caught by them.

However, the “alpha” description as it applies to wolf packs, not to mention humans, is not settled science and is, in fact, widely disputed. SketchyScience.com, which was created by a pair of Canadian researchers, breaks down why the theory has been reassessed in recent decades:

The alpha wolf theory is based on an observational study undertaken in the 1940’s by biologist Rudolph Schenkel. The theory gained popularity in the 1970’s when L. David Mech published his book The Wolf: Ecology and Behavior of an Endangered Species. Unfortunately, most scientists (including Mech himself) know that they alpha theory is based on faulty extrapolation. Mech has actually been trying to get the book out of print for a number of years.
You see, when Rudy Schenkel was watching wolves and making notes, he overlooked one important fact: the wolves he was studying were in captivity. Their pack was not the kind that formed naturally in the wild; it was made up of adult wolves forced to live together and compete for resources. Not surprisingly these wolves fought a lot and the dominant ones got their pick of food and mates. This study has been compared to learning about the behaviour of human families by observing people living in refugee camps.

This means that the behavior of the wolf pack is family-oriented and cooperative, not a dominance hierarchy, as was once thought. Domesticated dogs, on the other hand, may be more hierarchical than wild wolves, some research suggests:

Range and her colleagues tested the dogs’ and wolves’ tolerance for their fellow pack members with a mealtime challenge. The researchers paired a high-ranking dog with a low-ranking pack buddy and set out a bowl of food, then gave the same challenge to a pair of wolves. In every matchup, “the higher ranking dog monopolized the food,” Range told the meeting. “But in the wolf tests, both high- and low-ranking animals had access” and were able to chow down at the same time. At times, the more dominant wolves were “mildly aggressive toward their subordinates, but a lower ranking dog won’t even try” when paired with a top dog, Range said. “They don’t dare to challenge.”