A statement from former U.S. President Theodore Roosevelt has been recirculated online, to the point where it commands its own Facebook “page,” but not without some disinformation concerning its true origins.

Roosevelt’s remarks have been passed along under the headline, “Theodore Roosevelt’s ideas on immigrants and being an AMERICAN in 1907,” and a photograph of him speaking to a crowd: 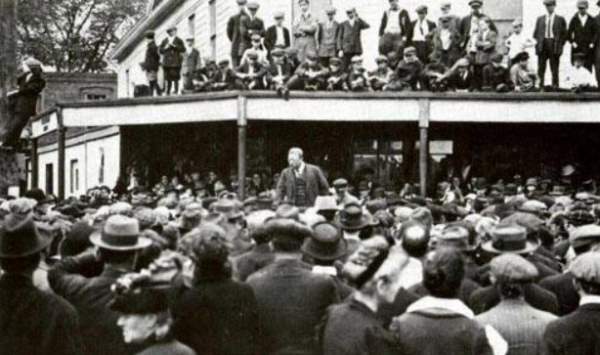 Another iteration reproduces the statement as a newspaper clipping: 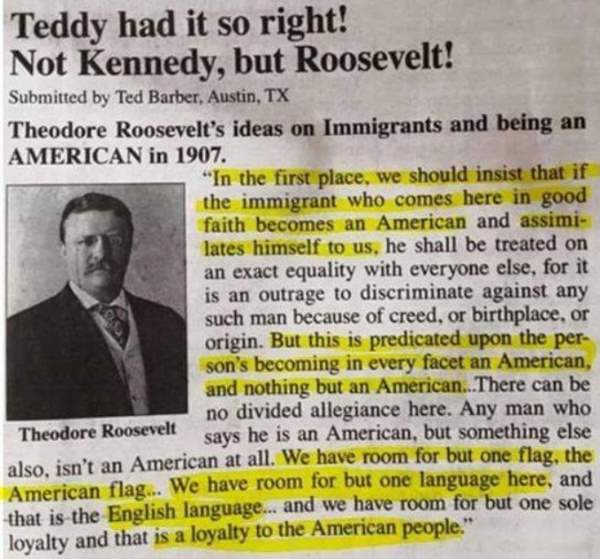 But while the statement really did come from Roosevelt, he never made it in public; in reality, it came from a letter he wrote on January 3 1919 to the nationalist group the American Defense Society. The letter reads in part:

I cannot be with you and so all I can do is to wish you Godspeed. There may be no sagging back in the fight for Americanism merely because the war is over. There are plenty of persons who have already made the assertion that they believe the American people have a short memory and that they intend to revive all the foreign associations which more directly interfere with the complete Americanization of our people. Our principle in this matter should be absolutely simple.

In the first place, we should insist that if the immigrant who comes here in good faith becomes an American and assimilates himself to us, he shall be treated on an exact equality with everyone else, for it is an outrage to discriminate against any such man because of creed, or birthplace, or origin. But this is predicated upon the person’s becoming in every facet an American, and nothing but an American….

There can be no divided allegiance here. Any man who says he is an American, but something else also, isn’t an American at all. We have room for but one flag, the American flag…

We have room for but one language here, and that is the English language…

…and we have room for but one sole loyalty and that is a loyalty to the American people.

The letter was read publicly at a meeting of the group on January 5 1919. Roosevelt died the next day.

The website TRSite.org, which is maintained by the National Park Service and devoted to Roosevelt’s personal history, noted that at the time Roosevelt wrote the letter the U.S. saw a marked increase in immigration into the country:

Between 1900 and 1915, more than 15 million immigrants arrived in the United States. That was about equal to the number of immigrants who had arrived in the previous 40 years combined. Not only were the numbers of immigrants swelling, the countries from which they came had changed dramatically as well. Unlike earlier immigrants, the majority of the newcomers after 1900 came from non-English speaking European countries. The so-called “new immigrants” had difficulty adjusting to life here. At the same time, the United States had difficulty absorbing the immigrants. Most of the immigrants chose to settle in American cities, where jobs were located. As a result, the cities became ever more crowded. In addition, city services often failed to keep up with the flow of newcomers.

He was also named an honorary president of the ADS; in 2017 NPR reported that in high school Stephen Miller — an adviser at the time to then-President Donald Trump with a history of anti-immigrant views — carried another remark from Roosevelt in his high school yearbook:

There can be no fifty-fifty Americanism in this country. There is room here for only 100 percent Americanism, only for those who are Americans and nothing else.

Update 4/6/21, 10:47am: This article has been revamped and updated. You can review the original here.