U.S. troops gave then-Senator Hillary Clinton's helicopter "Broomstick One" during her tour of the Middle East in 2003.

Like a nesting doll of dubious anecdotes, a spurious “joke” about Hillary Clinton spread online in both 2003 (when she was a U.S. Senator) and 2015 (when she announced she would seek the U.S. presidency again in the 2016 election).

The line, which first originated as a chain email, read:

Never accuse the American Military of not having a sense of humor! Have you heard what the troops are calling the Sikorsky Blackhawk helicopter Hillary Clinton used on her Iraq tour? “Broomstick One.”

The “joke” was no doubt inspired by Clinton visiting troops in Afghanistan and Iraq that Thanksgiving weekend, a tour that was seized upon by right-wing Internet users for at least one more questionable claim — that the claim that Clinton “cut in line” for dinner at Bagram Air Base to eat before troops did. That allegation also spread via chain email, without anyone ever coming forward to confirm it.

Similarly, there has been no confirmation that the “Broomstick One” callsign was ever used during Clinton’s Thanksgiving 2003 trip. Which made it easier for the chain email to be repackaged more than a decade later, after Clinton (who also served as Secretary of State in the first half of U.S. President Barack Obama’s administration) announced that she would run to succeed him; in this iteration, a photograph spread of an “official”-looking aircraft with the callsign written on it: 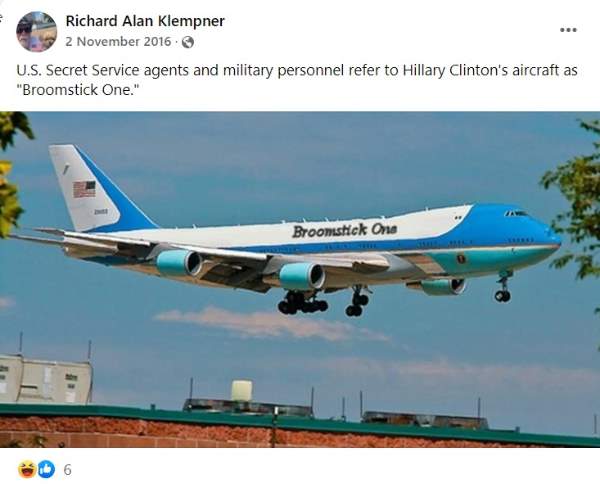 Clinton’s visit was also the origin point for the claim that an unidentified soldier took a photograph with her with his fingers crossed, signaling duress. While the photo itself appears to be legitimate, and one person identified himself as the soldier in question, the claim that the crossed fingers themselves meant duress and not opposition to her policy views is not.