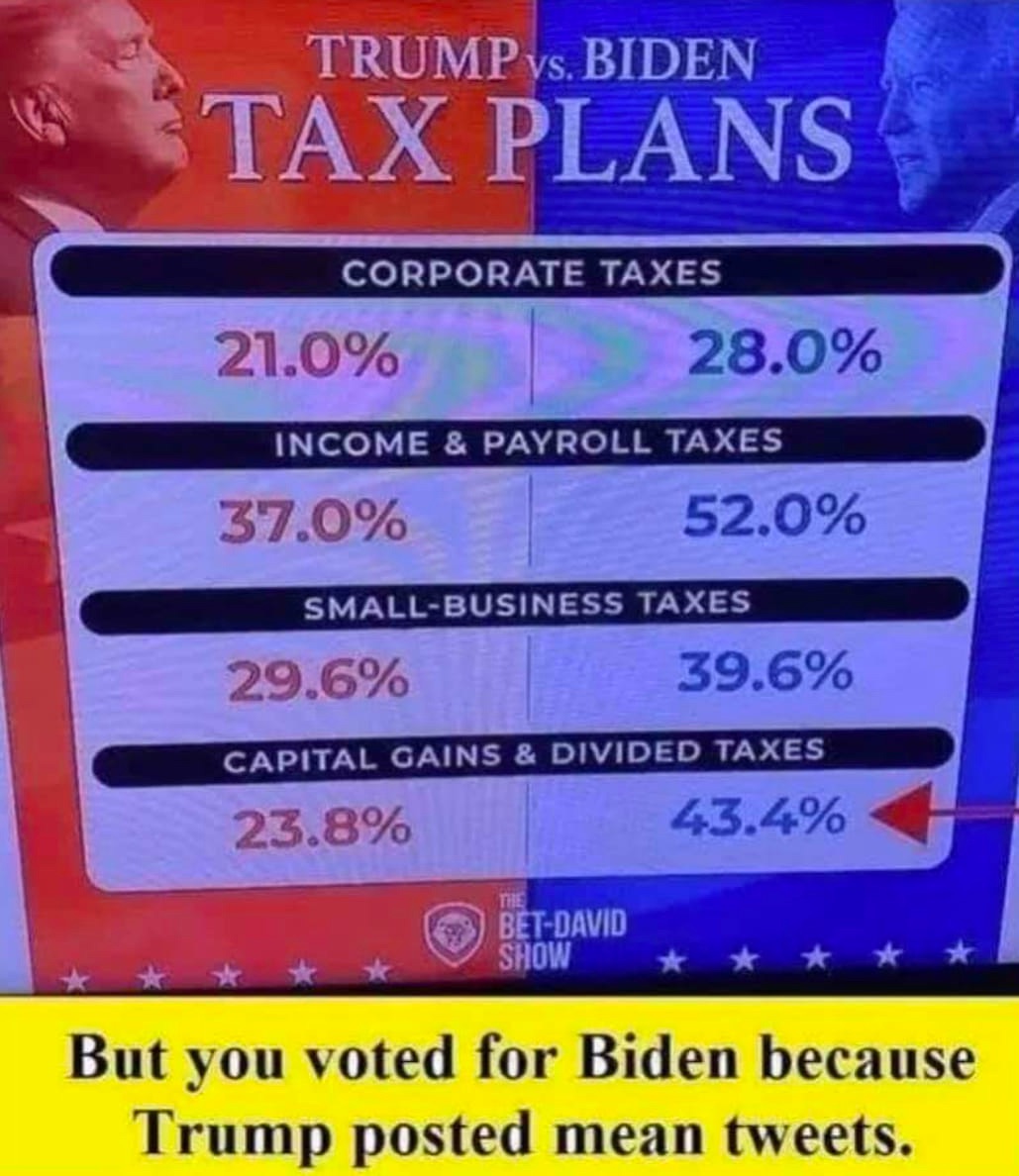 In what appeared to be a photograph of a screen showing a broadcast segment, with a watermark from “The Bet-David Show,” an image of Trump on the left side in red was paired with an image of Biden on the right side in blue. Text on the apparent screengrab read:

At the bottom of the meme, a yellow portion appeared to have been added after the fact, and it read:

But you voted for Biden because Trump posted mean tweets.

On February 10 2021, someone submitted the “mean tweets” version of the meme to Reddit’s r/forwardsfromgrandma, a subreddit where users satirize or share “boomer memes”:

New bullshit from grandma. Especially when this meme adds capital gains to things that will hurt ordinary Americans from forwardsfromgrandma

No citations were visible in the original image, and the original post did not include any supporting information.

In October 2020, we examined a meme claiming that financial advice guru Dave Ramsey had issued a warning about Biden’s tax plan; Ramsey did not in fact write the commentary attributed to him:

Not only was the post inaccurately attributed, it also made false claims about Biden’s tax plan. In December 2020, we looked at a similar claim about something known as “stepped-up basis,” and we were unable to validate the warnings:

In other words, disinformation memes proclaiming that Biden planned to raise taxes on the middle and working classes were thick on the ground bothduring and after the 2020 election.

A primary clue on the meme was a watermark for “The Bet-David Show.”

Patrick Bet-David describes himself as an entrepreneur on Twitter, but the only trace of the specific meme we found connected to Bet-David’s Twitter account was in an October 23 2020 tweet from a listener (or viewer) who thanked Bet-David for a “summary” on a podcast aired on that date. They included a similar screenshot of the meme:

@patrickbetdavid thanks for the summary on tonight's podcast…

That tweet provided an origin date for the claim (October 23 2020), as well as a specific source (The Bet-David Show podcast).

Bet-David’s meme carried with it the claim that Biden’s tax plan called for a purportedly higher tax rate in four specific areas:

On its face, if accurate, the meme seemed to suggest that the average taxpayer would (in some cases) pay more than 50 percent in taxes for “income and payroll taxes). The largest “jump” in tax rates on the meme involved “capital gains and divided taxes,” with a purported 20 percent difference between Trump’s purported plan and Biden’s.

So what are the four tax types listed in the meme, who pays them, and are the claims accurate?

Corporate taxes are, unsurprisingly, “a tax on the profits of a corporation,” and they are typically not a burden on the individual taxpayer. According to Investopedia.com as of February 6 2021, “corporate tax rate in the United States is currently at a flat rate of 21%. Before the Trump tax reforms of 2017, the corporate tax rate was 35%.” An Insider.com article published on April 20 2020 reported that Biden proposed raising the corporate tax rate from 21 percent to 28 percent to fund infrastructure spending, and that bipartisan negotiations were underway — that said, Biden’s proposed 28 percent was lower than the rate of 35 percent prior to 2017.

Income and payroll taxes are separate forms of tax, affecting taxpayers in a slightly different fashion.

Payroll taxes are typically “taxes paid under the Federal Insurance Contributions Act, or FICA,” including Social Security, Medicare, and other similar programs;

Income taxes are, as the name suggests, taxes levied on wages and other forms of income by the Internal Revenue Service (IRS).

The meme’s claim that Biden intended to increase “income and payroll taxes” to 52 percent (versus Trump’s purported 37 percent) was examined separately by Reuters in March 2021. In a fact-check (“Fact Check-Biden is not proposing a 52% income tax rate for anyone earning above $29,000”), Reuters explained that “Biden’s tax plans include an increase to the top income tax rate for taxable incomes above $400,000 per year from 37% to 39.6%,” adding a key piece of context — the tax rate increase from 37 percent (cited in the meme) a) only applied to incomes over $400,000, and b) was proposed at a rate of 39.6 percent. Reuters further noted that “a 52.0% tax on income would only apply to those in the highest tax band as they would pay both sides of this payroll tax,” explaining the combination of two separate taxes in the meme.

The type of small business and its revenue informed the specific business’ tax burden, and we were unable to find any indication Biden sought to increase “small business taxes.” A January 20 2021 WSJ.com opinion piece voicing skepticism about the proposed corporate tax increase posited that “about 30 million owners of businesses, most of them very small outfits, would not be affected by an increase in the corporate tax rate because they run their firms as limited liability companies, partnerships or sole proprietorships.”

Capital gains and divided taxes appeared to be a typographical error, as we located no information about “divided taxes.” Presumably, the meme-maker intended to reference taxes on “dividends,” which are related to capital gains.

Capital gains taxes are taxes levied on the increase in the value of an asset — like stocks, bonds, or real estate — and they are taxed at between zero and 20 percent by the IRS. An August 2020 WSJ.com editorial (again in opposition to tax increases on capital gains) was a possible source for the figures in the meme, and it claimed that “long-term capital gains and qualified dividends would be taxed at the ordinary income-tax rate of 39.6% on incomes above $1 million plus an investment-income surtax of 3.8%, bringing the total to 43.4%” under Biden’s proposals; the author also described the plan as including an increase of “up to 43.4%.”

Financial Advisor magazine’s website plainly stated that the “the top rate on long-term capital gains would nearly double from 23.8% to 43.4%,” which would “have a significant tax impact on wealthy investors.” In January 2021, JDSupra said “the marginal rate for capital gains could be as high as 43.4%” under Biden’s proposals, and “wealth management firm” Fiduciary Trust International’s February 2021 analysis maintained:

… other areas of concern for investors are taxes on long-term capital gains and qualified dividends, which have historically been taxed at preferential rates. For 2020 single individuals pay at a rate of 15% if their taxable income is above $40,000 and at 20% if over $441,450. Married couples filing jointly pay at a rate of 15% above $80,000 AND 20% if over $496,600. This could be raised for taxpayers with income above $1 million, although it’s not clear if that’s taxable income or adjusted gross income.

Thus, wealthy individuals would no longer get the tax benefits associated with long-term capital gains and qualified dividends; rather, they would pay ordinary income tax rates, which would be significantly higher. What that ultimately would mean for the market as a whole is unclear. If there is no longer preferential treatment for holding stock long term (more than a year), we might see more short-term buying and selling.

On March 23 2021, CNBC reported that “Biden tax plan would up the capital gains tax for millionaires to 39.6% — the same rate at which the president would tax job income for high earners.” However, on March 31 2021, an Axios story indicated that no changes to capital gains taxation were in Biden’s infrastructure spending proposal:

When asked about the capital gains omission last night [March 30 2021] during a press backgrounder, a senior administration official said: “Capital gains is not addressed here. The reason for that is that the focus of this plan is on corporate tax reform and reforming the corporate tax system. And we think that that is important as a matter of fairness and also important as a matter of encouraging domestic investment.” … Private fund managers are unlikely to cheer any proposal that includes a major corporate tax rate increase. But they’re certainly breathing some sighs of relief.

As noted in our prior fact-checks and consistently in news about Biden’s tax plan, anyone earning less than $400,000 a year “won’t see ‘one single penny’ in additional federal taxes.”

What Percentage of Americans Earn More Than $400,000 a Year?

An annual household income of $400,000 was frequently cited as Biden’s baseline for high-income earners, and the amount was set as the lowest threshold for tax increases.

According to a CNBC item published in October 2020 (which also stated that “families making $400,000 a year aren’t exactly living large — especially in major cities,”) only 1.8 percent of Americans earn $400,000 or more:

… according to a financial planning analysis, families making $400,000 a year aren’t exactly living large — especially in major cities. A family of four with $400,000 a year in income is more likely to drive a Toyota and take staycations than drive a Lambo and fly first class.

By national measures, those making $400,000 or more in income belong to a rarified group. They represent the top 1.8% of taxpayers, earning about 25% of the nation’s income. The $400,000 cutoff is also higher than the $250,000 income threshold proposed by President Barack Obama in 2008 when he sought to raise taxes on the wealthy.

Since Biden’s plan is largely a marginal tax increase, taxpayers will only see tax hikes on income above $400,000. So those making slightly more than $400,000 will see small increases, while the bulk of the $4 trillion in added revenue from Biden’s plan would come from super-earners making more than $1 million, according to the Tax Policy Center.

A “Trump vs. Biden Tax Plans” meme (originating with The Bat-David Show podcast) was first shared on October 23 2020, and a Facebook iteration from February 2021 accrued hundreds thousands more shares — indicating widespread and misplaced concern Biden planned to raise taxes on middle-class people. The meme included four types of tax and their purported increases, but it lacked a massive amount of context, as most of the tax categories (minus the nebulous “small business taxes” line) described individuals or households earning more than a million dollars a year. Editorials opposing said increases explained that “wealthy individuals would no longer get the tax benefits associated with long-term capital gains and qualified dividends,” which were “historically taxed at preferential rates.” As has often been the case, popular and inaccurate tax memes hid the fact that the increases over which sharers became so irate applied solely to large corporations and six-figure earners — with a small increase proposed on individuals making more than $400,000 a year.