The Jewish population in the separatist Ukrainian city of Donetsk was forced to "register" and pay a fine under penalty of deportation.

A disinformation campaign in Donetsk in Eastern Ukraine in April 2014 played into longstanding tensions around anti-Semitism in the area, and served as an example of how Russian President Vladimir Putin has been opportunistically using the same issue to fuel support for Russia’s attack on Ukraine in 2022.

As the New York Times reported at the time, unidentified men wearing masks were spotted outside the Bet Menakhem-Mendl synagogue in the city “handing out leaflets demanding that Jews register and pay a fine or leave the area.”

The fliers were made up to resemble a statement from Denis Pushilin, who at the time was chairman of the People’s Council for the breakaway Donetsk People’s Republic, calling for the local Jewish population to “register” at the People’s Republic’s headquarters and pay a $50 fee to do so under penalty of deportation.

The Israeli newspaper Haaretz published a photograph of one of the fliers: 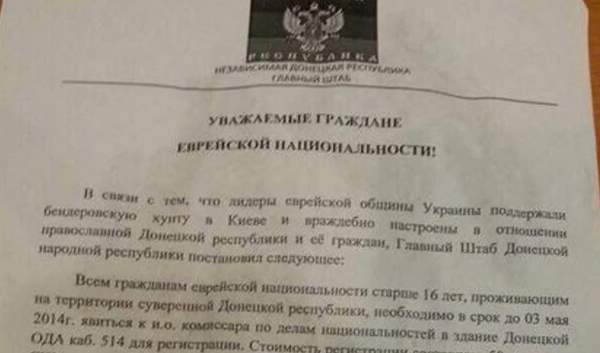 Pushilin’s separatist group denied any involvement with the fliers, but Yedioth Ahronoth, a separate Jewish newspaper, said in its own story on the leaflets:

In a response to a request by a Ukrainian Jewish website, Pushilin, the interim government’s regional chairman, confirmed that the flyers were distributed by his organization, but denied any connection to the leaflet’s content.

Locally, however, the fliers were not treated with credibility; Jewish residents of Donetsk told reporters that they had not experienced any anti-Semitism beforehand.

“I didn’t believe a word of it. You’d have to really be a fool to write anything like this,” said Yaguda Kellerman, deputy chief of the local Jewish community center. “You walk down the street with a beard and kippah [yarmulke], and you never experience any problems here. I was born in Donetsk.”

As NPR reported, John Kerry, then U.S. Secretary of State John Kerry condemned the leaflets saying, “This is not just intolerable, it’s grotesque. It is beyond unacceptable.” The news organization added:

Of course, Kerry has a political interest in portraying the separatists as Nazis. And the separatists have been working for months to portray the other side as Nazis. Russian President Vladimir Putin often describes himself as a defender of the Jews.

The leaflets appeared three months after the Ukrainian parliament voted to remove Viktor Yanukovych — an ally of Putin — from the country’s presidency, following months of demonstrations against his decision not to pursue closer ties with the European Union.

The union further imposed sanctions against the country following the confirmation that around 100 protesters in early 2014 were shot and killed by government forces, contrary to Yanukovych’s claims. Putin revealed in October 2014 that he helped Yanukovych escape the country after being forced out of office.

In late February 2022, Putin also justified his invasion of Ukraine by positioning himself as “a defender of the Jews,” claiming that he sought to “denazify” the country, an argument that was quickly debunked by experts, as NPR reported:

A lengthy list of historians signed a letter condemning the Russian government’s “cynical abuse of the term genocide, the memory of World War II and the Holocaust, and the equation of the Ukrainian state with the Nazi regime to justify its unprovoked aggression.”

They pointed to a broader pattern of Russian propaganda frequently painting Ukraine’s elected leaders as “Nazis and fascists oppressing the local ethnic Russian population, which it claims needs to be liberated.”

Putin’s invasion was also condemned by the United States Holocaust Memorial Museum, which said in a statement that it stood by both the Ukrainian population and the Holocaust survivors living there.

“These survivors are remnants of one of Europe’s largest pre-war Jewish populations that was almost completely decimated by the Germans in World War II,” museum chair Stuart E. Eizenstat said. “Having suffered terribly as victims of both Nazism and Communism, Ukrainians today are seeking to fulfill their democratic aspirations.”

Pushilin, now the leader of the Donetsk breakaway republic, was also criticized by U.S. officials for releasing a video claiming that Ukrainian troops were being prepared to “go on the offensive and implement a plan for the invasion of the territory” on February 18 2022. But researchers and news outlets found that Pushilin had actually recorded the video two days earlier.

Head of the LNR posted a video about evacuation on the state news outlet, but the metadata shows that the file was created two days ago (Telegram retains metadata). Testing some other videos on the channel to see other creation dates, will post below.https://t.co/yJ5jj5cD7q