A New Navy Ship, the USS New York, is Partly Built With Steel From the Ruins of the World Trade Center-Truth!

Some interesting information about a new Navy amphibious assault ship, the USS New York, that has been built with 24 tons of scrap steel from the World Trade Center, which was felled by terrorists on September 11, 2001.

The Truth:
The USS New York is one of several ships in the San Antonio class of amphibious transport dock ships. They are designed to transport and land troops, supplies, and equipment such as amphibious vehicles and helicopters. Designated as LPD. It is one of three similar ships that are being built and being given names that are associated with The Attack on America.  In addition to the USS New York, the USS Arlington will be named because of the location of the Pentagon, which was hit by American Airlines flight 77.  The USS Somerset will be named after the county in Pennsylvania in which United flight 93 crashed after being taken over by hijackers.
The ship is being built in New Orleans.  Twenty-four tons of steel from the World Trade Center have been recycled for the project.  About seven tons were melted down and poured into a cast to make the bow section of the ship’s hull.  The steel has been treated with reverence by the ship builders and several workers have postponed retirements for the honor of working on the USS New York.

The first was an armed gondola built by Revolutionary War General Benedict Arnold in 1776.  She was one of several ships later burned to avoid capture.
The second was a frigate built in New York and commissioned in 1800. She she saw service in the Mediterranean in the war against the Barbary Pirates.  She was in the Washington Navy Yard where she was burned by the British in 1814.
The next New York was built after the war of 1812 as part of 9 ships of the line to discourage a future war with Britain.  The threat lessoned so she was never launched but she was burned by Union Forces to avoid capture at the start of the Civil War.
The fourth was a screw sloop that was built beginning in 1863 but also never got launched.
The fifth was an armored cruiser commissioned in 1893.  She was used in the Spanish-American war and was the flagship of the admiral in the Battle of Santiago, which destroyed the Spanish fleet.  She was later renamed the Saratoga and then later the Rochester.
The sixth was the battleship USS New York, commissioned in 1914. She saw service in World War I and World War II.  She was used in the atomic testing in Bikini but survived without sinking.  She was sunk off Pearl Harbor in 1948 as a target ship.
Finally, there was a nuclear submarine names the USS New York that was in service from 1979 until 1997 when she was decommissioned. 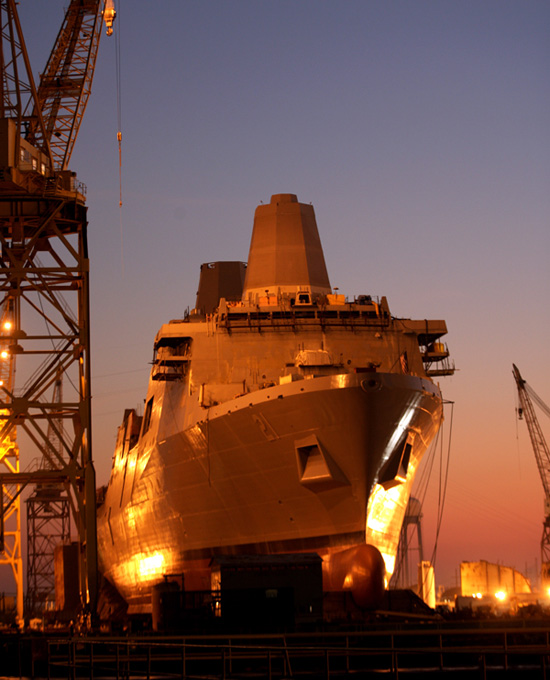 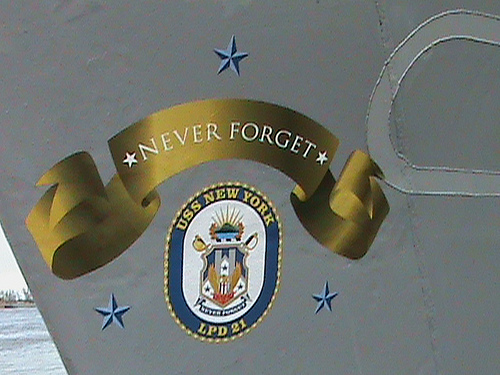 The USS New York will be commissioned in New York on November 7, 2009.  Click here for official site