A viral photograph showing a woman pulling two girls away from teargas shot over the U.S.-Mexico border by American forces was faked.

On November 25th, 2018, at the tail end of the long Thanksgiving weekend in the United States, the United States government closed down the San Ysidro port of entry — one of the busiest land crossings in the world — into and out of Mexico. When a group of people ran to the border crossing, officials from the American side shot tear gas and smoke bombs at unarmed people through the barriers into Mexico.

The United States purportedly did so because of rumors that a group of people from a large caravan that has trekked from Central America to the United States had been planning to “rush” or “storm” the border. A photograph from Reuters photographer Kim Hyung-Hoon from the Mexico side went viral: 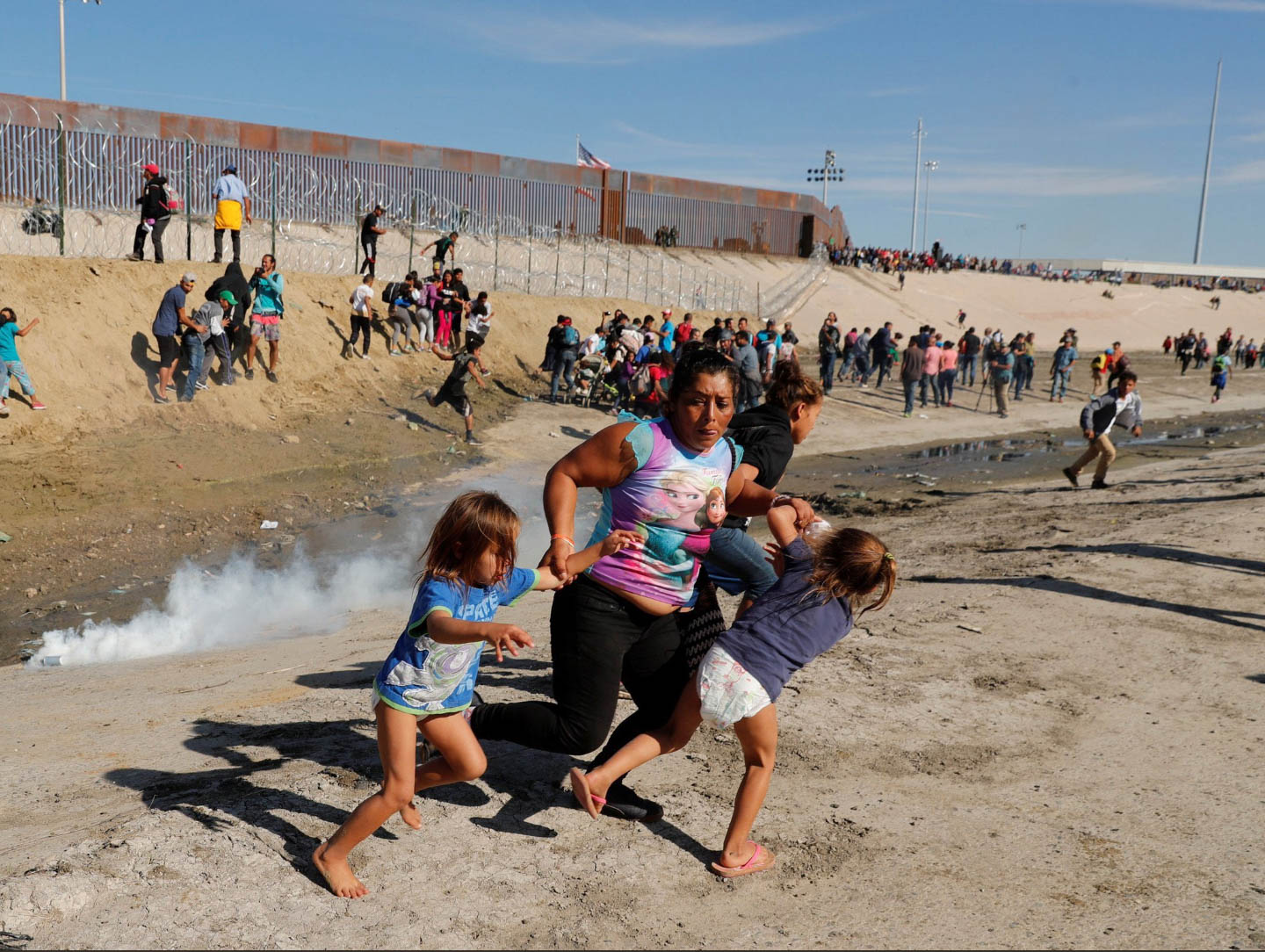 Instantly and predictably, the usual disinformation purveyors went into overdrive to claim that the photographs were faked with the usual “evidence” of fakery. One story read:

Yesterday’s Headline is todays hoax. The illegal alien mother ‘fleeing’ from the border wall was all a lie. It was a setup.

After further review, yesterday’s ‘horrific’ picture of a woman with barefoot children running from the US border wall was a hoax. In the background of the picture a group of men are posing for one camera man and another is running towards another camera man. In other areas, people are just standing around. The woman with the children was just a photo-op….

It included a photograph with mark-ups as “proof” of this claim: 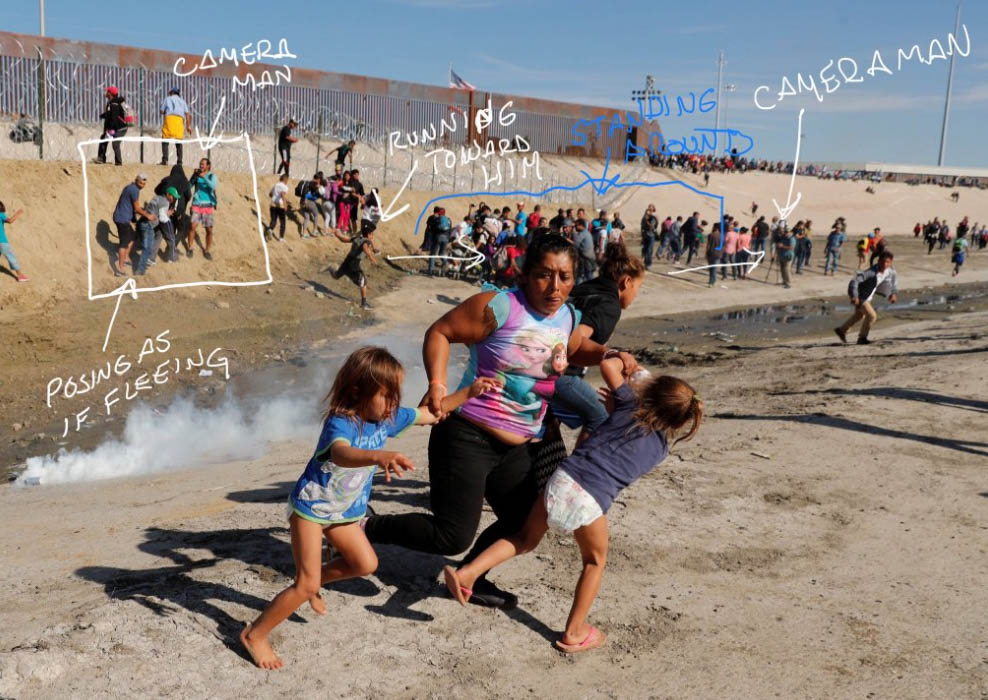 First of all, the woman here is not an “illegal alien,” but an asylum seeker, which is permitted under United States and international law. Secondly, the image here shows her (and the rest of the crowd) not in the United States but crossing through Tijuana’s notorious El Bordo, meaning that she is in Mexico.

The photographs were not faked, and they accurately show the chaos that stemmed from the decision on the part of the United States to fire tear gas and smoke bombs at unarmed protestors, as multiple photographs and videos from the scene clearly show:

#US border guards shooting several rounds of tear gas into #Mexico to disperse migrants massed at the border in #Tijuana. Many women and children around… «I fainted, » one woman told me. pic.twitter.com/HZ6RsiNBLM

The reason so many reporters were there is because there was a planned demonstration for which caravan members had been preparing the night before by making flags and banners at the camp to show to Mexican and American border agents as they approached the port. Many of them were made by the children traveling with the group: 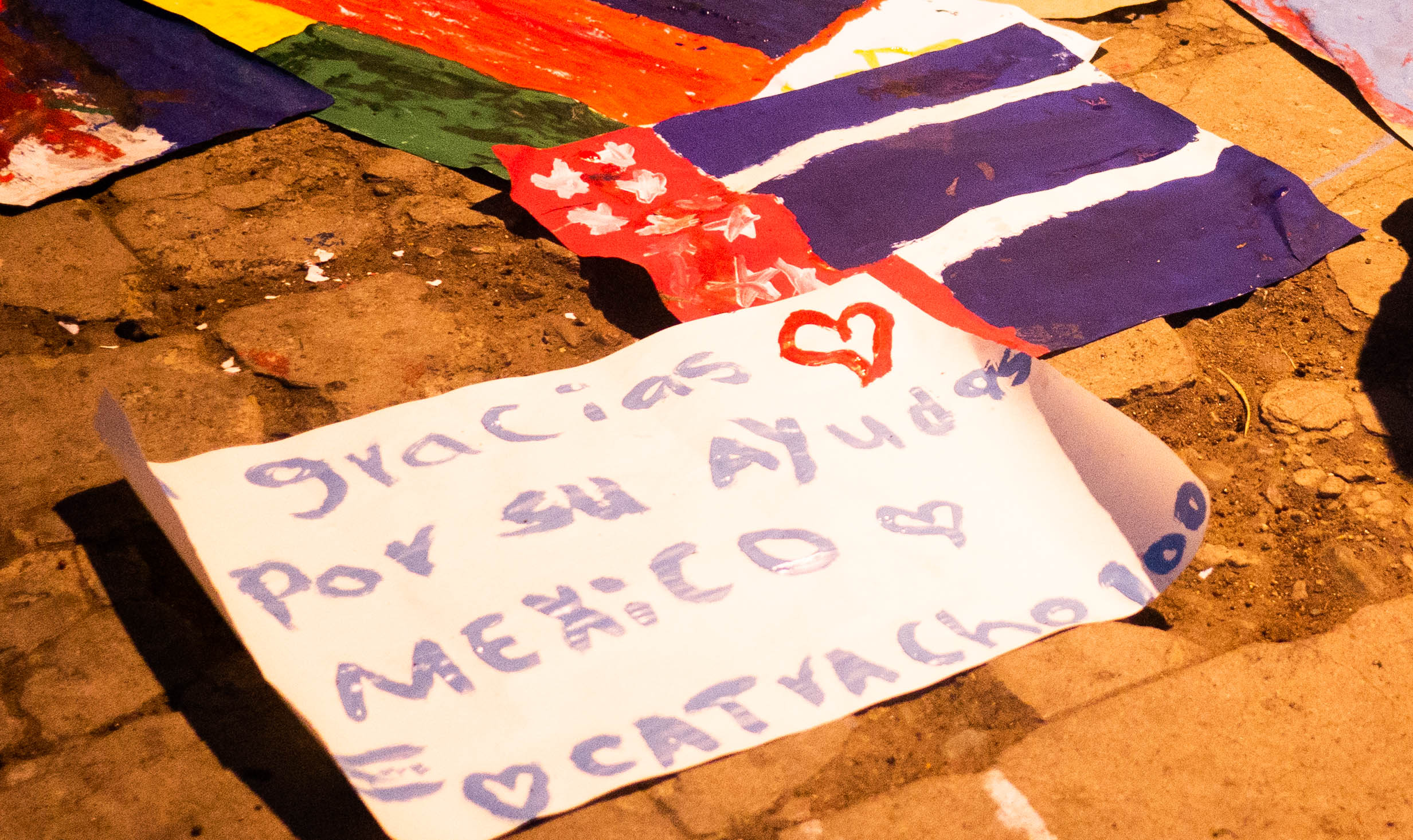 Human Rights Watch, which was on the ground in Tijuana monitoring the situation, points out that the demonstration started peacefully:

Hundreds of Central American men, women, and children walked with banners and baby strollers from the Benito Juarez stadium to the El Chaparral port of entry, on the US-Mexico border. They marched to ask for asylum and thank the Mexican authorities for their support.

But some individuals pushed their way through, opening a breach in the line of police shields that was quickly widened by dozens of migrants who sought to run into US territory.

The more people began running towards the border, the more joined them. I observed as the migrants, pushing baby strollers and wheelchairs with their meager belongings on their backs, streamed across the Tijuana river to the Mexican immigration offices and through fences to neighboring train tracks.

While a few people were able to get up to and through the border wall into the United States, various descriptions of the group “rushing” or “storming” the border are not accurate:

Today’s CBP shutdown of the San Ysidro port came about as a large group of migrants marched (and at times ran) toward the port. The goal – according to organizers – was to raise migrants’ visibility and protest asylum wait times https://t.co/uZMmhZPW6i

The Caravana Migrante is an annual trek from Central America to the United States border that is intended to fulfill two objectives — to draw attention to an ongoing humanitarian crisis in the region, and to coordinate large-scale requests to enter the country. The caravans have been going on since at least 2009 and end when participants turn themselves in en masse at the border to request entry into the United States, as asylum can only be requested at a port of entry or from within its borders. (Typically, only a tiny percentage is allowed to remain in the country.)

Pressure has been building in Tijuana in particular, where much of the pressure of the United States’ immigration laws and policies have been concentrated because of the port of entry there:

The San Ysidro port of entry is the most common place for Central Americans to seek asylum in the US, because it’s so large and because the route to Tijuana is safer than traveling through northeast Mexico into Texas. But for months, the number of asylum seekers going to San Ysidro has outstripped the number the US actually allows in to seek asylum.

Citing resource constraints, the US allows 60 to 100 asylum seekers — or fewer — into San Ysidro each day. An unofficial wait list of hundreds of people over the summer ballooned to thousands this fall. Before the caravan arrived, wait times stretched to two months, and the migrant shelters in Tijuana were already near capacity.

As wave after wave of people arrived in caravans from Honduras, El Salvador, and Guatemala, all countries that have been devastated by instability and violence, rumors came crashing down ahead of them, plaguing the journey from start to finish with the usual anti-immigrant propaganda and disinformation fueled by provocateurs and carried along by the misinformed.

The backlog and disinformation has culminated in thousands of hungry, bedraggled, and frustrated people stuck just south of the American border, with members of the United States military waiting for “invasions” in riot gear watching through freshly strung barbed wire over the border wall — with still more caravans on their way.