Women’s Suffrage Movement, Why Women Should Vote and the “Iron Jawed Angels”-Truth!

Summary of eRumor:
An email that tells the story of the Women’s Suffrage Movement that fought for the right for women to vote and the Home Box Office movie called “Iron Jawed Angels” that aired on television.  It tells of the “Night of Terror” in 1917 when women were arrested for protesting at the White House, beaten and tortured and says that it as a reminder for all to vote.
The Truth:
This email covers only part of the story.  Women’s rights had been an issue throughout the early history of the United States along with the abolition of slavery. There is a complete timeline posted on the Library of Congress web site in a section dedicated to The National American Woman’s Suffrage Association collection consisting of 167 books, pamphlets and other artifacts documenting the suffrage campaign.  The Library of Congress timeline begins with Abigail Adams who wrote a memo to her husband in 1776 to remind the Continental Congress while they were drafting the Constitution of the United States to “remember the ladies.” It wasn’t until after the civil war and the abolishment of slavery in the US that the women’s movement began to gain momentum as the next battle for civil rights.

In 1866 Elizabeth Cady Stanton and Susan B. Anthony formed the American Equal Rights Association, an organization dedicated to the goal of universal suffrage.

In 1872 Susan B. Anthony was arrested and fined $100 for trying to enter a polling place to vote for Ulysses S Grant.  Former slave, Sojourner Truth showed up at a polling booth in Battle Creek, Michigan, demanding a ballot but was turned away. According to the case posted in the University of Kansas City Law School Anthony never paid her fine and “no serious effort was made by the government to collect it.”

In 1878 A Woman Suffrage Amendment  was introduced in the United States Congress proposing “The right of citizens to vote shall not be abridged by the United States or by any State on account of sex” but was not ratified by Congress until August 18, 1920.

In 1913 Teddy Roosevelt adopted the woman’s suffrage cause as a plank on his Bull Moose Party platform when he ran for a third term for President of the United States. 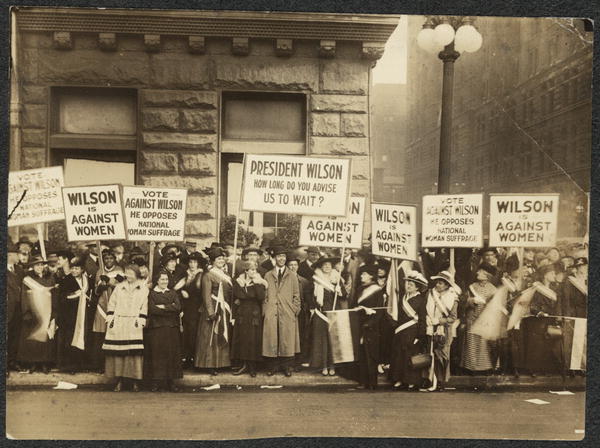 Throughout the course of time there were many groups and conventions promoting the right to vote for women.  Lucy Burns and Alice Paul organized the Congressional Union eventually changing the name to the National Women’s Party which got them noticed.  Their tactics were more radical and militant than the groups that preceded them and included hunger strikes, picketing the White House, and engaging in other forms of civil disobedience to publicize the suffrage cause.

In 1917 members of the movement staged a massive protest in front of the Whitehouse in Washington DC.  Hundreds of women were arrested on charges of “obstructing sidewalk traffic.”  Many were convicted and sentenced to prison at the Occoquan Workhouse in Virginia.

In 2004 HBO (Home Box Office) produced and released the docudrama “Iron Jawed Angels” staring Hillary Swank as Alice Paul and Frances O’Connor as Lucy Burns.  It gives an account of the history of the movement and does show Lucy Burns, who went on a hunger strike during her incarceration, being forced fed through a tube down her throat.

Doris Stevens (1892-1963) wrote her firsthand account of treatment and conditions in which the suffragists were held at the Occoquan Workhouse in 1917 in a book called “Jailed for Freedom”  and it can be found at the Gutenberg Project website, a collection of writing that were produced by tens of thousands of volunteers.

In 1978, President Jimmy Carter signed the Susan B. Anthony Dollar Coin Act into law making her the first woman to be honored by having her likeness appear on a circulating United States coin.

Click here for the University of Kansas Law School “Trial of Susan B. Anthony”

Click here for Doris Steven’s “Jailed for Freedom” on Gutenberg.