Summary of eRumor:
The Veterans Administration (VA) ordered that Christian symbols and statutes in a chapel at the Oscar G. Johnson VA Medical Center in Iron Mountain, Michigan, be covered when the chapel was not being used for Christian services.
The Truth:
It’s true that Christian symbols were once covered by a curtain when Christian services were not being held in the chapel at the Oscar G. Johnson VAMC, but that policy is no longer in place.
The story went viral in the spring of 2014 after a number of news outlets reported that the VA facility in Iron Mountain was not in compliance with a 2008 federal regulation that requires houses of worship to be nonsectarian. The story went viral again in early 2015, so TruthorFiction.com followed up with staff at the Oscar G. Johnson VAMC for an update.
Bradley Nelson, the public affairs director at the facility, told TruthorFiction.com that the curtain was temporarily used to meet requirements outlined in the VA’s Spiritual and Pastoral Care Procedures that were issued in 2008. The policy states that the VA must “uphold the free exercise of religion by all medical, domiciliary, and nursing home patients in the health care facility.”
“In keeping with this, it has been long standing policy that VA chapels not reflect any one denomination or faith when not being used for specific faith services or activities,” Nelson said. “This allows for our patients and their families who do not identify with the Christian faith to use the room for prayer, meditation or reflection according to their faith tradition. We were coming into compliance with this policy last spring and the person responsible for the Chapel thought the curtain would be the easiest way to do this, i.e., open it for chapel services and close it when not being used. Based on constructive feedback and what other VA medical centers have done, the curtains were taken down.”
But VA medical facilities must still comply with the Spiritual and Pastoral Care Procedures. Today, Christian symbols are allowed in the main chapel while Protestant and Catholic services are being held, as well as 24/7 in the Holy Sacrament room located inside the chapel, Nelson said.
“We have the smaller Holy Sacrament Room, which is dedicated solely to Christian worship and includes the crucifix, statues of Jesus and Mary, Stations of the Cross, Holy Water, stained glass windows, and other accoutrements found in churches, all of which remain in place 24/7,” Nelson said. “The room is available for anyone wishing to use it.”
And there aren’t any specific directives that prohibit the use of scripture or religious items like the crucifix and statues of Jesus and Mary during worship services in the main chapel — but they can’t remain there 24/7.
“These religious items are put away between chapel services, however, they are accessible for any group or individual wishing to use them in the chapel for their own prayer, meditation or worship,” Nelson said.
Several versions of the Holy Bible and Catholic Rosaries are also available in the chapel. 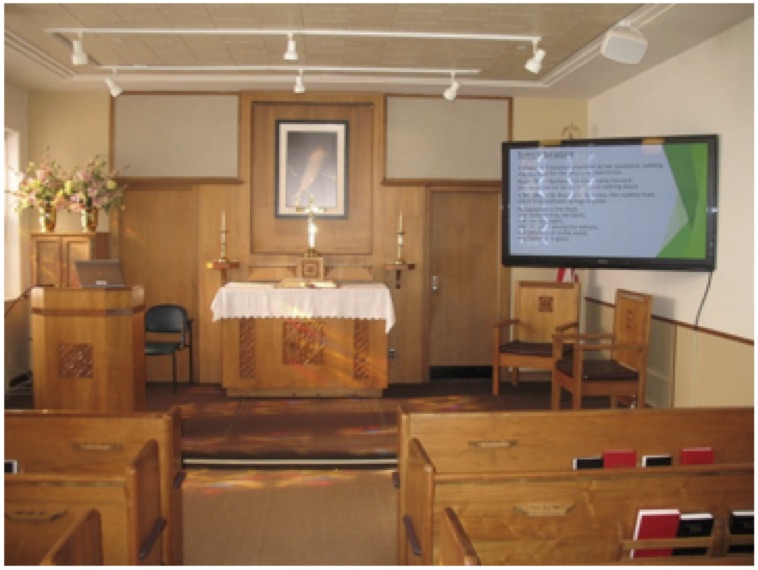