This is a forwarded email about the 2012 graduation ceremony at the Air Force Academy in Colorado Springs, CO on May 23rd.  At the end of every graduation ceremony there is a traditional fly over by the United States Air Force Thunderbirds that is followed by an air show.  The fly over is a precision maneuver where the Thunderbirds fly over the graduates at the same moment that the future U.S. Air Force Officers toss their combination caps in the air.  Following the fly over the Thunderbirds perform an air show for the assembled crowd.  The email says that President Obama had to leave after the Thunderbirds conducted their flyover, which resulted in a costly delay of the scheduled performance of the precision flying team.
The Truth: 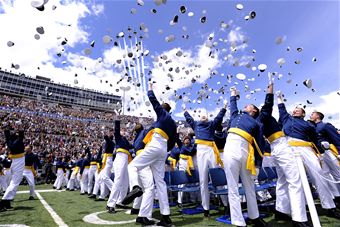 There was a delay between the Thunderbird flyover and the scheduled air show that followed the graduation ceremony according to a May 23, 2012 article in the Colorado Springs Gazette, but the delay happens every year.
A Public Affairs Officer at the U.S. Air Force Academy in Colorado Springs told TruthOrFiction.com that the delay was normal and had nothing to do with the President’s departure from the area.

This portion of the Air Force Academy graduation was something to see. At the very end of the graduation ceremony the Master of Ceremonies announced that the Class of 2012 was dismissed.  At that moment the graduates tossed their combination caps in the air and the Thunderbirds perform their flyover. Once the caps are in the air children from the audience are released into the graduate area to retrieve the tossed caps and are allowed to keep them as a souvenir. The children are then escorted to an area where their parents can meet up with them to return them to their seats.

An information page showing the scheduled events involving the graduation is posted on the Academy web site, which shows the air show beginning approximately thirty minutes after the close of the graduation ceremony.   Click here for schedule.
Updated 2013:
President Obama spoke at the U.S. Naval academy commencement ceremony on May 24, 2013.   It is not required that a sitting U.S. President attend the commencement ceremonies every year for all the military academies.   Vice President Biden spoke to the class of 2009 and Secretary of the Air Force Michael Donley was the 2013 commencement speaker at the U.S. Air Force Academy.
In 2013 the Thunderbirds were unable to make the traditional flyover because of sequestration but their was a flyover of historical World War II aircraft by the Texas Flying Legends.  This according to an article in the Commemorative Air Force web site.  The article said, ‘Support for these flyovers is also being provided by the Texas Flying Legends, Commemorative Air Force and the National Museum of World War II Aviation.”  The Commemorative Air Force is an organization that was founded to “acquire, restore and preserve in flying condition a complete collection of combat aircraft which were flown by all military services of the United States.”
Posted 06/18/12   Updated 06./04/13