An ongoing medical disinformation campaign took a sharp turn in July 2021, when right-wing commentators and politicians pivoted to direct attacks against continued efforts by the Biden administration to get more Americans vaccinated against COVID-19.

The disinformation started to reach new keening heights during the Conservative Political Action Conference (CPAC), whose QAnon-embracing ranks went out of their way to push conspiracy theories in order to politicize any measures taken to slow the spread of the pandemic, which has so far killed more than half a million Americans.

This routinely weaponized rhetoric to which conservative messaging has pivoted in near unison espouses long-discredited conspiracy theories about “depopulation” caused by the COVID-19 vaccine — while simultaneously justifying the mass deaths and suffering the virus has already caused (and betraying a fundamental misunderstanding of evolution):

Newsmax anchor Rob Schmitt cavalierly suggested on Friday night that vaccines are “against nature” because some diseases are just “supposed to wipe out a certain amount of people” since that’s just the “way evolution goes.”

In recent weeks, right-wing media has seamlessly shifted from casually pushing vaccine hesitancy on its viewers to outright advocating for vaccine resistance, culminating in a crowd at the Conservative Political Action Conference in Texas this weekend cheering at the fact that the federal government hasn’t met its vaccination goals.

Videos out of CPAC showed a persistent theme of vaccine denial messaging amid the rest of the corrosive disinformation pushed by the groypers, boogaloo bois, open white supremacists, and QAnon adherent who attended the event, which Dr. Anthony Fauci (who is widely recognized as the nation’s top infectious disease expert and who is now vilified by the CPAC crowd) said was deeply disturbing:

It’s horrifying. I mean, they are cheering about someone saying that it’s a good thing for people not to try and save their lives…

I mean, if you just unpack that for a second… it’s almost frightening to say, ‘Hey, guess what, we don’t want you to do something to save your life. Yay!’ Everybody starts screaming and clapping. I just don’t get that…. And I don’t think that anybody who’s thinking clearly can get that.

The darkly speculative narratives of shadowy medical practitioners lying to the public so that they can do nonspecific (but always evil and frightening) things is reminiscent of the Soviet “Doctor’s Plot” of 1953, detailed here in a 2002 article in BMJ:

In general [Joseph] Stalin severely mistrusted doctors—whatever their nationality. In his memoirs Dmitri Shostakovich tells the tale of Vladimir Bekhterev, a world renowned psychiatrist who at 70 was summoned to assess Stalin’s mental condition.9 The good doctor described him as ill, perhaps even paranoid. And how right he was. Bekhterev died immediately afterwards—poisoned by Stalin.

But Stalin’s special hatred was reserved for Jewish doctors. Although in the last decades of Tsarist rule Jews were restricted from owning land and excluded from most other professions, they had indeed entered medicine in numbers far out of proportion to their small percentage in the overall population.6 So when Stalin decided to resolve the Soviet Union’s “Jewish problem,” it made perfect sense to open the campaign with a show trial against a group of (mainly Jewish) doctors who were often branded “Zionists” or agents of the “Joint” (an international Jewish charitable organisation).

A propaganda offensive accompanied the plans to deport—“for their own good”—the Jewish population. One million copies of a pamphlet were prepared for distribution—its title: “Why Jews Must Be Resettled from the Industrial Regions of the Country.” The deportation was purportedly “in response” to a carefully orchestrated letter prepared for Pravda and signed by many terrified Soviet Jewish leaders, imploring “The Father of all the Peoples” to deport the Jews for their own protection. It appealed to “the government of the USSR, and to Comrade Stalin personally, to save the Jewish population from possible violence in the wake of the revelations about the doctor-poisoners . . . of Jewish origin . . . We, as leading figures among loyal Soviet Jewry, totally reject American and Zionist propaganda claiming that there is anti-Semitism in the Soviet Union.”6

According to Stalin’s plan, the doctors would be convicted and scheduled to be hanged—symbolically—around Easter.

In accusing the Jewish doctors of being poisoners, Stalin was, of course, reviving a libel that was common among medieval anti-Semites. The most notorious incarnation of the “Jews as poisoners” libel occurred in the fourteenth century when they were accused of having caused the devastating Black Plague by poisoning the wells of Europe. In addition to all the Jews who died from the plague, thousands more were murdered in pogroms prompted by these accusations. In 1610, the University of Vienna’s medical faculty certified as its official position that Jewish law required doctors to kill one out of ten of their Christian patients. One wonders what it must have been like to be in a Jewish doctor’s office — in back of nine other patients.

Stalin died before he could carry out the acts he envisioned (and there is some debate over whether these plans were ever going to be implemented at all) but the corrosive disinformation and weaponized propaganda circulated did plenty of lasting damage on their own. They reverberated in everyday interactions and manifested in many cases as antisemitic moral panics:

Ongoing investigation not only confirm the re-launch of the anti-Semitic campaign between the end of 1952 and the beginning of 1953, but they also prove the existence of an organised plan for mobilising the population through Judophobia. The regime used the latter as an effective means of political pressure and social intimidation – and as an excuse to give new strength to the anti-religious struggle, so obtaining the closure of several synagogues and the confiscation of their properties. 43

The reports suggest that the authorities, though having actively instigated Judophobia, were remarkably anxious at the possibility of spontaneous manifestation of popular violence. Indeed the population gave proof of a high level of anti-Semitism, calling most often for the expulsion of the Jews from their positions, but also their execution or deportation to Siberia.44 In some cases, even Stalin’s death was ascribed to the Jews and somebody explained the liberation of the physicians by resorting to the alleged Jewishness of Lavrentii P. Beriia.45

The same situation occurred in Byelorussia where – by means of any possible media of communication – a major press campaign was orchestrated with the support of party propagandists in assemblies, in workplaces and particularly in schools of every kind and level. The campaign led to the almost complete expulsion of the Jews from any position of responsibility in the whole republic, with people calling for their dismissal, but also their internment and deportation.46

The anti-vaccine conspiracy theories in 2021 are not the same as those circulated around the Doctor’s Plot in 1953, but neither did they appear in a vacuum. Weaponized disinformation campaigns may not always be exactly the same narratives word for word, but like history, they do often rhyme, and by design.

In 2021, these anti-vaccine campaigns are being used to — among other things — expel public health officials from positions of responsibility for refusing to put politics or profit over regional responses to a vicious pandemic that is, as of July 2021, once again on the upswing after killing hundreds of thousands of Americans and millions more globally:

The Tennessee state government on Monday fired its top vaccination official, becoming the latest of about two dozen states to lose years of institutional knowledge about vaccines in the midst of the coronavirus pandemic.

The termination comes as the virus shows new signs of spread in Tennessee, and the more-transmissible delta variant surfaces in greater numbers.

Dr. Michelle Fiscus, the medical director for vaccine-preventable diseases and immunization programs at the Tennessee Department of Health, said she was fired on Monday afternoon and provided a copy of her termination letter. It provides no explanation for her termination.

“It was my job to provide evidence-based education and vaccine access so that Tennesseans could protect themselves against COVID-19,” Fiscus said in a written statement. “I have now been terminated for doing exactly that.”

The state has now moved to end all vaccine programs for teenagers, not just COVID-19 vaccines without further explanation — amid heavy pressure from Republican lawmakers:

The health department will also stop all COVID-19 vaccine events on school property, despite holding at least one such event this month. The decisions to end vaccine outreach and school events come directly from Health Commissioner Dr. Lisa Piercey, the internal report states.

Additionally, the health department will take steps to ensure it no longer sends postcards or other notices reminding teenagers to get their second dose of the coronavirus vaccines. Postcards will still be sent to adults, but teens will be excluded from the mailing list so the postcards are not “potentially interpreted as solicitation to minors,” the report states.

Meanwhile, the spread of vicious anti-vaccine propaganda can be traced back to just a few “influencers” on social media platforms — per a report by the Center for Countering Digital Hate, about two-thirds of all of disinformation about COVID-19 vaccines on social media originates from just a dozen people.

An October 13 article published in Nature notes that this particular weaponized conspiracy theory continues to bear fruit in 2021, just as it did in the 1950s and beyond. The journal conducted a survey of more than 300 scientists who have given interviews about COVID-10 in order to see whether they had suffered any negative backlash:

Anthony Fauci, head of the US National Institute of Allergy and Infectious Diseases, was assigned personal security guards after he and his family received death threats; UK chief medical adviser Chris Whitty was grabbed and shoved in the street; and German virologist Christian Drosten received a parcel with a vial of liquid labelled ‘positive’ and a note telling him to drink it. In one extraordinary case, Belgian virologist Marc Van Ranst and his family were placed in a safe house when a military sniper went on the run after leaving a note outlining his intentions to target virologists.

These examples are extreme. But in Nature’s survey, more than two-thirds of researchers reported negative experiences as a result of their media appearances or their social media comments, and 22% had received threats of physical or sexual violence. Some scientists said that their employer had received complaints about them, or that their home address had been revealed online. Six scientists said they were physically attacked…

This pattern of escalating harassment is not unprecedented (usually targeting experts in climate change, the effects of gun violence, and vaccines) but pandemic-related abuse is far worse in terms of volume, speed, and scale than public health experts and other scientists have previously experienced.

Update, 7/26/2022, 3:26 PM: After Roe v. Wade was overturned in June 2022, this conspiracy theory was quickly expanded to include doctors who perform abortions. Disinformation purveyors also quickly pivoted to baselessly accusing doctors and other medical experts and professionals of making up stories about pregnancies and complications in order to make anti-abortion activists and campaigners “look bad.” -bb 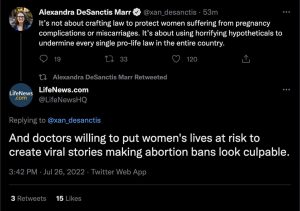