Former White House speechwriter and game show host Ben Stein’s commentaries for CBS News on the holiday season were co-opted into an attempt online to stir up fears over non-existent “holiday trees” inside the White House.

The root of the false claim is that Democratic presidential administrations had phased out the phrase “Christmas tree.” To do this, part of a commentary Stein released in 2005 was attached to a more inflammatory letter published by a newspaper in Nebraska in 2002.

The claim first circulated as a chain email, which recirculated online after Stein released another commentary in 2011.

By 2021, the email had been imported onto Facebook and other platforms as “copypasta,” with some iterations still mistakenly attributing the remarks in the newspaper letter to Stein: 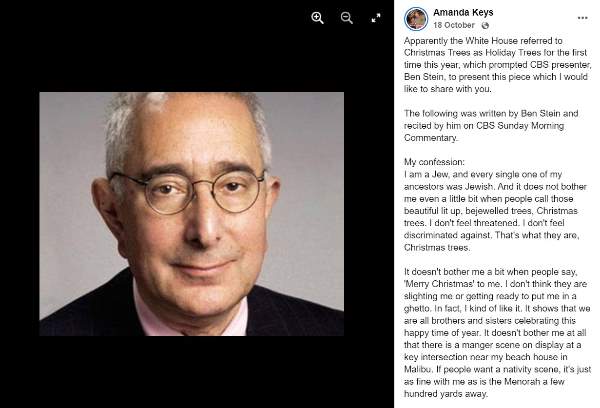 Other iterations, however, attributed the entire commentary to another Jewish author, Steven Levy. We covered that version of the chain email here.