The violent uprising, which took place a week after Lula’s inauguration ceremony, bore a striking resemblance to a similar insurrection in the United States two years before — and with good reason, as it was planned, structured, and executed in much the same way:

In the weeks leading up to Sunday’s violent attacks on Brazil’s Congress and other government buildings, the country’s social media channels surged with calls to attack gas stations, refineries and other infrastructure, as well as for people to come to a “war cry party” in the capital, according to Brazilian social media researchers.

Organizers on Telegram posted dates, times and routes for “Liberty Caravans” that would pick people up in at least six Brazilian states and ferry them to the party, according to posts viewed by The Washington Post. One post said: “Attention Patriots! We are organizing for a thousand buses. We need 2 million people in Brasília.”

The “caravans” and the planning and language around them in the Brasília attacks were very similar to those around the “Million MAGA March” in Washington, DC in November 2020, one of the events that preceded the January 6 2021 insurrection:

The violent uprising in Brasília was, like the January 6 2021 U.S. Capitol riot, accompanied by disinformation campaigns and preceded by escalating violent rhetoric and agitprop on social media for years beforehand, some of which was fannall of which should be recognizable to English-speaking readers:

Lula’s election win, which came with the slimmest margin in a generation, was quickly recognized by politicians across the spectrum and governments around the world. But Bolsonaro never conceded defeat.

His allies filed a lawsuit to annul a batch of votes, but the case was quickly dismissed, spurring more protests.

Some tactics looked strikingly similar to those used in the U.S. after the 2020 presidential election. In one case, truck drivers and diehard Bolsonaro fans caused national transportation nightmares by blocking roads in over a dozen Brazilian states, prompting the Supreme Court to issue orders to federal highway police.

QAnon has also been a major motivator for the Brazilian far right:

The sheer volume of online conspiracies circulating in Brazil is hard to overstate. Sometimes, they become visible in the real world. One such example occurred during a pro-Bolsonaro protest in the capital, Brasília, last May. Amid the flag-waving car procession, one vehicle had the letter “Q” prominently displayed on the rear window. At the time, most Brazilians had no inkling of what the letter meant. Times have changed, and references to the QAnon conspiracy theory are today splashed across social networks, chatrooms, and messaging apps. There’s even a new self-published e-book, O Movimento Q (“The Q Movement”), seeking to bring the conspiracy to the masses.

Brazil’s version of QAnon has a distinctly pro-Bolsonaro flavor.

QAnon, a weaponized antisemitic conspiracy theory that incorporates elements of blood libel (“cannibal pedophiles“) and fantasies of authoritarian crackdowns into its claims, is not the only narrative that Brazilian disinformation purveyors share with their American counterparts, although it has been a clear and present part of many disinformation campaigns that have erupted from online rhetoric into real-world violence since at least 2020.

The narratives in Brazil were platformed and disseminated by many of the same entities who were responsible for pushing disinformation about the results of the 2020 election in the United States:

“The whole thing smells,” said a guest on Steve Bannon’s podcast, one day after the first round of voting in the Brazilian election in October [2022].

The race was heading towards a run-off and the final result was not even close to being known. Yet Mr Bannon, as he had been doing for weeks, spread baseless rumours about election fraud.

Across several episodes of his podcast and in social media posts, he and his guests stoked up allegations of a “stolen election” and shadowy forces. He promoted the hashtag #BrazilianSpring, and continued to encourage opposition even after Mr Bolsonaro himself appeared to accept the results.

Mr Bannon, the former White House chief strategist, was just one of several key allies of Donald Trump who followed the same strategy used to cast doubt on the results of the 2020 US presidential election.

Connections were rife between disinformation purveyors in the United States and Brazil going back a significant amount of time; for example, Eduardo Bolsonaro, a right-wing politician and a son of disgraced former president Jair Bolsonaro — whose supporters were responsible for the attack in Brasília — has openly associated with far right American activists several years.

“It was a pleasure to meet STEVE BANNON, strategist in Donald Trump’s presidential campaign,” the younger Bolsonaro tweeted in August 2018. “We had a great conversation and we share the same worldview. He said to be an enthusiast of Bolsonaro’s campaign and we are certainly in touch to join forces, especially against cultural marxism.” 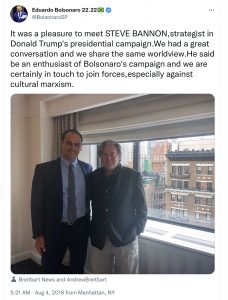 “Cultural marxism” references yet another longstanding disinformation campaign; like QAnon, it is explicitly and implicitly antisemitic, as this 2003 article from the Southern Poverty Law Center makes clear:

Right-wing ideologues, racists and other extremists have jazzed up political correctness and repackaged it — in its most virulent form, as an anti-Semitic theory that identifies Jews in general and several Jewish intellectuals in particular as nefarious, communistic destroyers. These supposed originators of “cultural Marxism” are seen as conspiratorial plotters intent on making Americans feel guilty and thus subverting their Christian culture.

In a nutshell, the theory posits that a tiny group of Jewish philosophers who fled Germany in the 1930s and set up shop at Columbia University in New York City devised an unorthodox form of “Marxism” that took aim at American society’s culture, rather than its economic system.

The theory holds that these self-interested Jews — the so-called “Frankfurt School” of philosophers — planned to try to convince mainstream Americans that white ethnic pride is bad, that sexual liberation is good, and that supposedly traditional American values — Christianity, “family values,” and so on — are reactionary and bigoted. With their core values thus subverted, the theory goes, Americans would be quick to sign on to the ideas of the far left.

And Brazilian counterdisinformation experts were not caught by surprise by the events of January 8 2023:

Brazilian analysts have long warned of the risk in Brazil of an incident akin to the Jan. 6, 2021 insurrection at the U.S. Capitol. In the months and weeks leading up to the country’s presidential election in October — in which leftist Luiz Inácio Lula da Silva defeated the right-wing incumbent, Jair Bolsonaro — social media channels were flooded with disinformation, along with calls in Portuguese to “Stop the Steal” and cries for a military coup should Bolsonaro lose the election.

These streams of heavily weaponized rhetoric strongly resemble those inflicted on the United States in the latter half of 2020:

Meanwhile, Jair Bolsonaro, who left the country just days ahead of the planned right-wing coup, has since been spotted in random places in Florida, such as a fast-food restaurant and wandering through a grocery store:

On 1 January, while Mr da Silva was being sworn in, Mr Bolsonaro was photographed at a Florida KFC with a stringy piece of chicken hanging out of his mouth. More mockery ensued on social media.

Several days later, a video surfaced of Mr Bolsonaro inside a Publix grocery store. It was shot by an unknown individual. In the strange video, the former president appears to be wandering around the store aimlessly. He does not have a cart or appear be shopping. At one point, he inexplicably enters a checkout line despite having no items to purchase. He then leaves the line as abruptly as he entered and begins staring at an endcap near the front of the store.

As news of the Brasília attacks continued to emerge, Jair Bolsonaro claimed that he had to check in to a U.S. hospital to be treated for “severe” abdominal pain:

Bolsonaro has been hospitalized multiple times in recent years with gut blockages after being stabbed while campaigning for the presidency in 2018. He traveled to the United States two days before Luiz Inacio Lula da Silva took the office of president.

Additionally, he and his allies, in yet another echo of the disinformation narratives previously weaponized by Donald Trump and his supporters, have unsuccessfully attempted to pin the blame of the January 8th 2023 attack on “the left.”

Brazilian officials have already arrested hundreds of people who reportedly participated in the Brazil insurrection. Some American lawmakers are also calling for the former president, who is already under investigation by multiple agencies in his home country, to be extradited.