A video posted on YouTube allegedly shows a passenger plane landing at LAX depositing reflective sulfur oxide particles, or "chemtrails," to counteract global warming because a pilot forgot to switch them off.

A 2013 YouTube video gave online conspiracy theorists grist for their climate change-denying mill for their claims that nebulous authorities were filling the air with “chemtrails,” and — like a lot of disinformation — it continues to linger online.

The brief clip entitled “Busted: Pilot Forgets to Turn Off CHEMTRAILS Before Landing” was originally uploaded to the platform in 2014 and was initially removed because of copyright violations before resurfacing through other user accounts.

The user behind another iteration of the footage claims that it was taken on December 28 2009 and shows a Boeing 777 plane landing at Los Angeles International Airport (LAX).

The person behind the camera films a plane landing, then shifts their focus to some condensation in the sky: 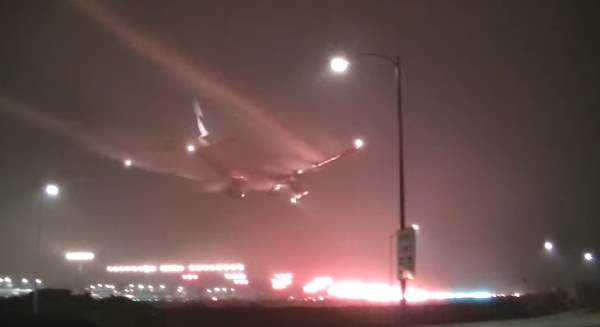 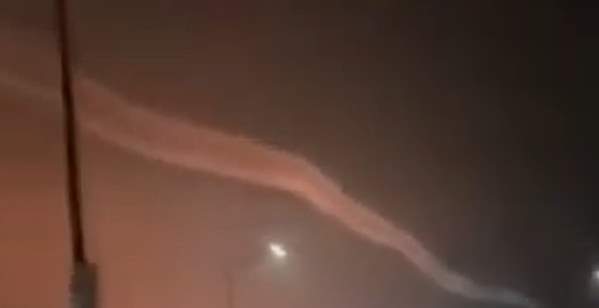 What is actually captured in the video is not a pilot being “busted” but a commonplace ocurrence known as an aerodynamic contrail. According to the National Weather Service:

Condensation trails, commonly called contrails, are narrow cirrus cloud streamers that form behind high flying aircraft. Contrails are formed by two basic processes. The first method of formation relies on hot and humid engine exhaust mixing with air of low vapor pressure at low temperatures. As the added moisture and particulate matter from the exhaust mixes with the cold air, condensation occurs and the streamer is born. These types of contrails are sometimes called exhaust trails.

As Pacific Standard magazine reported in 2014, the origins of the “chemtrails” conspiracy theory might be linked to a 1996 paper published by U.S. Air Force researchers on the possible uses of weather (and thus, by extension, climate change) as a “force multiplier”:

As an assignment, the Air Force chief of staff asked the study’s authors to “examine the concepts, capabilities, and technologies the United States will require to remain the dominant air and space force in the future.”

Though the paper’s introduction clearly specifies that it does not reflect official government policy, and that the weather modification and control scenarios described within it are “fictional representations of future situations/scenarios,” some took it as evidence that the government was actively working to control and manipulate the Earth’s climate.

Unfortunately for the Air Force, the third-best way to fan the flames of a conspiracy is to say you were only speaking hypothetically. The second-best way is to say, unequivocally, that any given practice isn’t government policy. And the first-best way is to then say you’ve investigated people’s concerns, and found them to be untrue—which the Air Force did in 2002. And in 2005.

Despite the Air Force’s statements, accusations that “chemtrails” not only existed but constituted proof of a “secret large-scale atmospheric program” (SLAP) percolated online, fanned by some right-wing commentators. To combat this, geochemists and atmospheric chemists took part in a study published in August 2016 to determine whether those claims held any scientific merit. The study’s abstract stated:

Results show that 76 of the 77 scientists (98.7 percent) that took part in this study said they had not encountered evidence of a SLAP, and that the data cited as evidence could be explained through other factors, including well-understood physics and chemistry associated with aircraft contrails and atmospheric aerosols.

The study concluded that while it would be reasonable for people to have questions concerning a confirmed rise in atmospheric contrails, the evidence did not support the idea that any government entity was to blame.

“Changes in aircraft technologies may be causing contrails to persist longer than they used to, and changes in industrial development could potentially be increasing aerosol deposition in some areas,” the researchers concluded. “But the focus on a secret, large-scale atmospheric spraying program may be taking attention away from real, underlying problems that need addressing.”

Despite the best efforts of the researchers, though, the false claim that the video shows a “busted” pilot continues to circulate through social media as of January 2022: 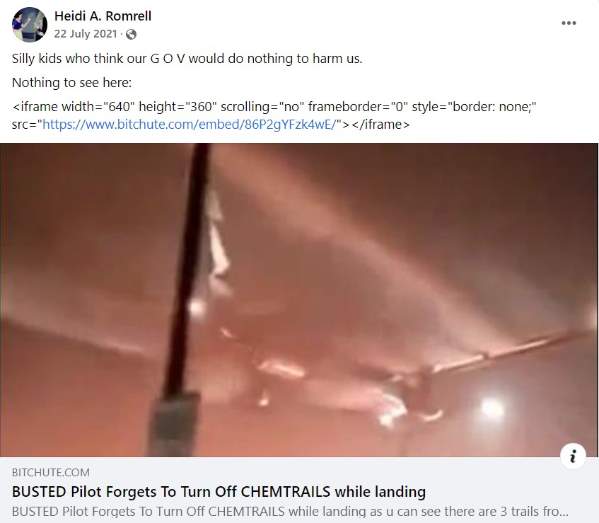 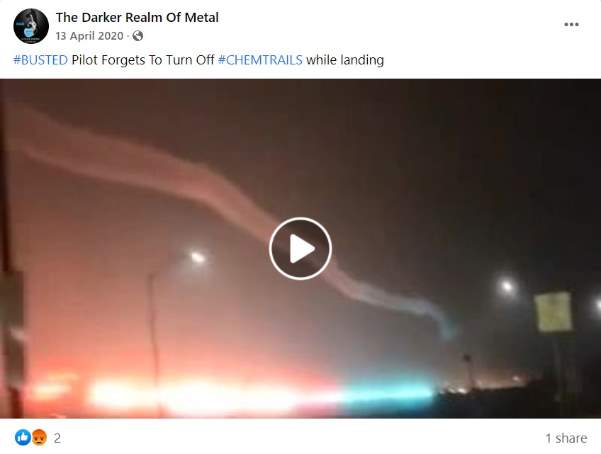