Doctors in South America found in 2016 that an insecticide used in crop dusting in Brazil was the driving cause of microcephaly cases reported during an outbreak of the Zika virus.

An outbreak of the Zika virus in Brazil in late 2015 and early 2016 provided a strong example of the same sort of disinformation that would be used to minimize or outright deny the COVID-19 pandemic just four years later.

In February 2016 — just under a year after the outbreak reportedly began in Brazil — a group from Argentina calling itself “Physicians in the Crop-Sprayed Villages” released a paper claiming that a surge in cases of microcephaly was not caused by the virus, but the introduction of the larvicide pyriproxyfen into drinking water in areas affected by the virus. The group further argued that the presence of pyriproxyfan made the microcephaly outbreak unique compared to other countries where the virus had been reported.

That paper was quickly used by right-wing blogs to both “explain” the outbreak and, as is so often the case, further their own conspiracy theories, such as one video claiming that the outbreak itself was giving then-United States President Barack Obama an excuse to route more funding toward “the vaccine industry”: 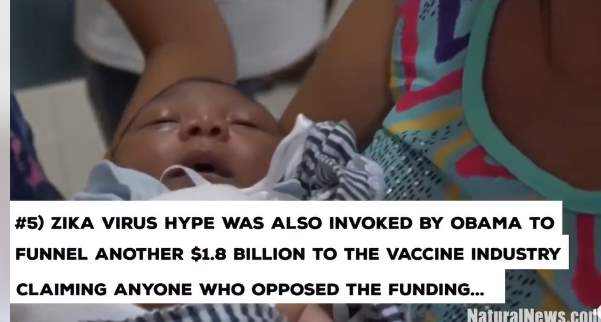 The Brazilian Ministry of Health quickly refuted the accusation, saying that cases of microcephaly had also been reported in areas where pyriproxyfen, a larvicide approved for use by the World Health Organization (WHO), was in use.

“Unlike the relationship between the Zika virus and microcephaly, which has had its confirmation attested in tests that indicated the presence of the virus in samples of blood, tissue and amniotic fluid, the association between the use of pyriproxyfen and microcephaly has no scientific basis,” officials said in a statement.

Medical professionals outside of the country also debunked the Argentinians’ claims. As the Huffington Post reported:

Not only does the report convey inaccurate information about Zika virus’ history and speculate about the timetables of microcephaly cases and the use of the larvicide in water treatment, but it ends in a diatribe against other types of mosquito control efforts. Given the clear need for mosquito control to prevent further illnesses — and not just Zika, but also dengue fever, chikungunya, and yellow fever — this isn’t just ill-conceived, it’s actually dangerous.

“The effect of this [report] to cause panic in people, and to prevent an effective response to disease carrying-vectors, is a very substantial negative,” said Ian Musgrave, an expert on neurotoxicology and pharmacology at the University of Adelaide. “If they wanted to control the mosquitos, what are they going to use now? Something even more toxic?”

The Post further rebuked the claim that Brazil was an outlier when it came to Zika outbreaks:

Doctors in French Polynesia, a group of islands that experienced an 11 percent Zika virus infection rate in 2013, are examining the medical records of 17 cases of “central nervous system malformations” in fetuses and infants. Twelve of these fetuses had cerebral malformations, including brain lesions, and five babies had brainstem dysfunction and absence of swallowing. None of their mothers experienced Zika virus symptoms, but four did test positive for signs of flavivirus — a group of viruses that includes Zika.

A study published later that year by researchers at the Medical College of Wisconsin in Milwaukee showed how social media platform Facebook aided and promulgated the spread of disinformation about the outbreak.

In the study, published in the American Journal of Infection Control, lead researcher Dr. Megha Sharma and her team examined the 200 most popular Facebook posts and videos containing the words “Zika virus” for a 30-day period. While 81 percent of these posts contained information from reputable sources, the most popular individual posts contained disinformation.

For example, a post calling the virus a “fraudulent medical hoax” that had been viewed more than 530,000 times and shared by more than 19,000 viewers. By comparison, the credible post that received the most attention during the 30-day period was shared by only 964 Facebook users and amassed around 43,000 views.

“What was most disturbing to me was the websites or videos that are giving this misinformation are trying to take the focus completely away from the issue,” Sharma told Reuters following the study’s publication.

An estimated 3,700 cases of microcephaly were reported in Brazil during the outbreak, which infected around 1.5 million people overall.

Years later, other Facebook users invoked the disinformation around the Zika outbreak to attempt to paint COVID as “a ploy to deceive the masses”: 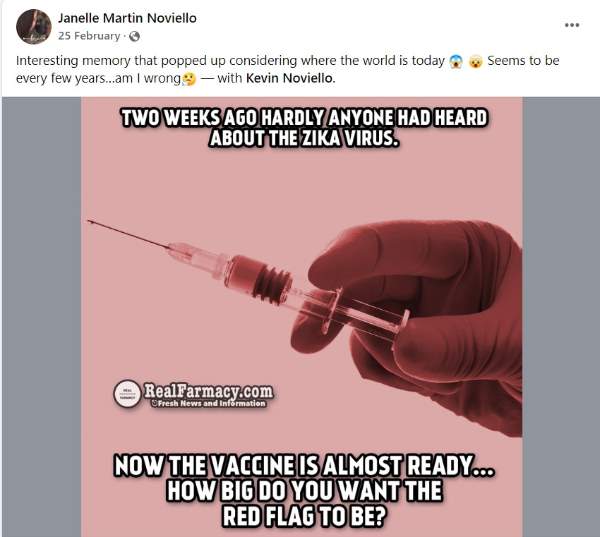 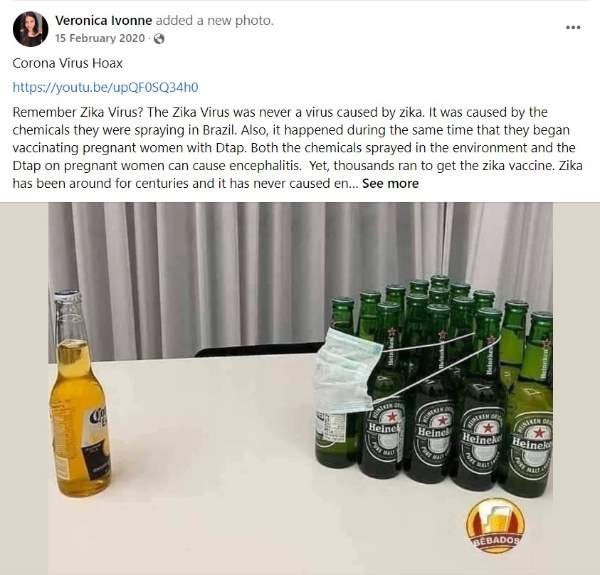 And just as in the 2016 outbreak, questionable “studies” were also spread online to promote “cures,” or to rail against actual public health mandates.