Jane Fonda Supported the Enemy in Vietnam and Her Conduct Got American POW’s Killed-Truth! & Fiction!

Summary of eRumor:
In protest of Jane Fonda being considered as one of the top 100 women of the century, this email reminds Americans of her controversial visit to North Vietnam during the war.

It quotes a POW named Jerry Driscoll who was taken from his prison cell, cleaned and dressed for a visit with Fonda, then ordered to give Fonda a positive account of his treatment. He spit at Fonda and was beaten and dragged away.  Then a group of POWs which included a Col. Larry Carrigan were brought out to visit with Fonda.  According to the story,  “…she walked the line, shaking each man’s hand and asking little encouraging snippets like: “Aren’t you sorry you bombed babies?” & “Are you grateful for the humane treatment from your benevolent captors?”  Many of the POW’s were listed as missing in action so to identify themselves to American authorities, they each wrote their Social Security numbers on small pieces of paper and slipped them to Fonda as she greeted them.  To their horror, however, after Fonda finished meeting them, she turned to the North Vietnamese commanding officer and handed him the POW’s pieces of paper.  In the beatings that followed, three American POW’s died and Col. Carrigan nearly died.  The email then ends with a statement about events in North Vietnam from an unnamed American POW.

February 16, 2013 Update:  This rumor has once again gone viral with the news of a film where actress Jane Fonda will be portraying the role of Nancy Reagan.    The film is called  The Butler and is about a man who served as a butler under 8 U.S. Presidents in the White House.  At this time it is still in the post production stage and no release date has been issued.

October 7, 2010 Update: A version of this eRumor have begun circulating in 2010 saying that President Obama is honoring Jane Fonda.  This version has been circulating since 2009 and is pretty much a carbon copy of the original Barbara Walters eRumor. 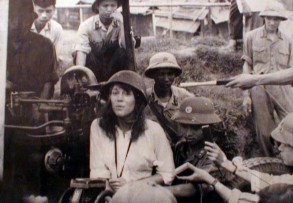 This story hearkens to a real visit to North Vietnam by Jane Fonda in July of 1972, but the stories about betraying POWs is not true.

The Fonda trip became unforgettable because it infuriated Americans, especially Americans in uniform, many of whom still regard her as a traitor.  She praised the North Vietnamese, posed for a photo at a Communist anti-aircraft gun emplacement, made several radio broadcasts for the Communist North Vietnamese in which she called American military leaders “war criminals,” then when some of the POWs returned home and described mistreatment by the North Vietnamese, she said Americans should “…not hail the POWs as heroes, because they are hypocrites and liars.”

There is no dispute that her visit took place and that her words and actions were in support of the enemy.  This particular email includes three stories, two of which have been denied by the POWs who are named, and one of which has been confirmed as true by the source, although he was not named in the email.

First, the “100 Women of the Century” was a project of the Ladies Home Journal and a TV special hosted by Barbara Walters that aired April 30, 1999.  Jane Fonda was one of the 100. How the email story about the POWs got started is not known, but it has been widely circulated.

TruthOrFiction.com located Jerry Driscoll who said that the accounts about him in the email are “…the product of a very vivid imagination” and he requests that people please stop passing it on to others.

TruthOrFiction.com also contacted Mike McGrath, of Nam-POWs, who says the Larry Carrigan events never happened either.  He says Carrigan calls the story a “hoax” and does not want to be associated with it.  McGrath also says that some versions of the email include an account from a Dave Hoffman and that his story is true.  Hoffman says he was tortured (hung by a broken arm) until he agreed to go before Jane Fonda.  He was among a small group who witnessed one of her radio broadcasts for Hanoi.  The part of the email that begins with “To Whom it may concern” is true.  It’s a quote from an article titled SHAME ON JANE originally published on the Advocacy And Intelligence Index website on April 28, 1999 and written by Michael Benge who was a civilian captured by the North Vietnamese in 1968.  In his statement, he also makes reference to a missionary nurse who died in captivity.  For your interest, that was Betty Olsen, a Christian Missionary Alliance nurse from New York.

In 1988 in an interview with Barbara Walters on 20/20, Jane Fonda talked about her Vietnam visit and issued what some feel was an apology but which her critics say was not enough.

Fonda said, “I would like to say something, not just to Vietnam veterans in New England, but to men who were in Vietnam, who I hurt, or whose pain I caused to deepen because of the things that I said or did.  I was trying to help end the killing and the war, but there were times when I was thoughtless and careless about it and I’m…very sorry that I hurt them.  And I want to apologize to them and their families.”

In 2005, Fonda published her autobiography in which she described in detail her decision to go to North Vietnam. She said it was primarily motivated by her desire to document the U.S. bombing of important dikes that, if destroyed, could kill tens of thousands of people and devastate the lives of millions.  The U.S. had denied the bombings. In the book, Fonda is unapologetic about the trip or her participation in broadcasts on radio Hanoi but regrets the pictures taken of her at the gun emplacement.  She said it made it appear as though she was celebrating armaments aimed at American planes, which was not how she felt and was not the context in which the pictures were taken.  She reminds readers that the U.S. investigated her trip and found no reason to bring any charges against her.  She also describes her longstanding support of, and interaction with, U.S. military personnel and says her only beef was with the U.S. government, not the troops.

Related eRumors on our site: Michael Reagan Article on “The Butler”