A photograph shows well-stocked pallets of baby formula (Lac Del) in Mexico in late May 2022.

Amidst a baby formula shortage in the United States, a Facebook user ranted in a May 30 2022 status update that “formula” was widely available in Mexico:

Our family is on vacation in Mexico. Not the mainland, but an island off the coast. We went grocery shopping today and guess what? The shelves and isles were full. There was even pallets of formula. Folks we are being played. There is a shortage because the Biden Administration wants us to suffer. It is all about manipulation and control. 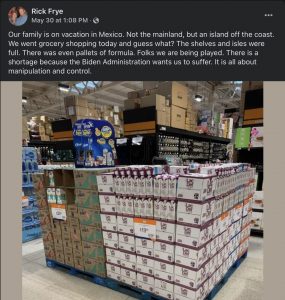 As of June 8 2022, the post had been shared more than 34,00o times, increasing by 3,000 shares in under an hour. Commenters on the main post frequently took the claim at face value, often responding incoherently:

“Biden is criminal treasons! Why Mark Zuckerberg paid $400 million to Gas shell company headquarter in Delaware? What do they do with $400 million?”

“We aren’t even being fooled. We’re letting them get away with it!Myself included. I really and truly don’t know what to do more. You vote. You become involved, you write, call.. We need to cry out to Jesus in unison.”

“Doesn’t matter what the picture is of – we as Americans are still being played by the Biden administration!! Things were great under Trump – whether you liked him or not!! Gas prices, grocery prices, inflation down, unemployment at a record low & stock market booming!!🇺🇸 MAGA!!!!”

“Yup! Wanting to make us a communist country.. they want control & us to rely on them.. Scary!!”

“This is so hard to believe that anyone would do such a thing. Shame on them!”

Commenters weighed in with a number of imagined culprits, ranging from a scheme to promote government assistant programs, to plans by the World Economic Forum, transgender people, Jussie Smollett, “this woke pc liberal movement,” and other pet conspiracy theories:

“they want a slave class and elite class…. middle class doesnt vote right so they are trying to destroy us with high energy costs, shortages of everything and now men are having babies🫃🏻🫃🏻🤦🏼‍♂️ poor ppl are easier for democrats to control with gov handouts”

“if you’re not awake to what’s happening the end game is pure control and power over a once free America. it’s about power and control just go look up the world economic form with Klaus Schwab plans, that’ll explain a lot of things. You think c0vid and mass shootings and everything happening is all just by coincidence it’s most definitely not. People once said these are all conspiracy theories but they’re all coming to surface as the truth they’re now conspiracy facts not everything you read is real but once you have self knowledge and actually do real research you realize we’re being played like fools. Unaffordable Gas, housing ,open borders this is all done by design. Why do you think they indoctrinate kids in college to believe in Liberal socialism. Because just like Hitler said give me your children and I will rule your world it’s the sad truth . The worst part of all this is people are still asleep behind the wheel and believing the lies there being spoon fed about this woke pc liberal movement. Wake up America before it’s to late ! 🙏🙏🙏🇺🇸🇺🇸🇺🇸🇺🇸🇺🇸🇺🇸”

“facts lol liberals male shit up… russia collusion hoax the server linked to russia… covid came from a bat… jussie smolette was attacked by 2 guys in maga hats… electeic cars are good for the environment…. all lies”

Occasionally, Facebook commenters interjected to explain, correctly, that the baby formula shortage only affected the United States, not Mexico, due to the closure of an American formula production plant and the Trump administration’s renegotiation of the North American Free Trade Agreement, or NAFTA.

Other commenters appeared to believe the image was representative of a false claim that “pallets of formula” were held at the border between the United States and Mexico at the height of the formula shortage, an utter fabrication advanced by the Republican governor of Texas, Greg Abbott, in a May 12 2022 statement:

Google Trends data provided a view of how influential the Facebook post itself was. For the seven-day period ending June 8 2022, the most common search related to “formula” was “Lac Del,” the most visible brand name item in the image.

In the appended photograph, shelf-stable cartons of purple Lac Del were visible. We located a product listing for that particular item on the website for Walmart in Mexico, and it explained that the “Lac Del” in the image was a lactose-free milk, not baby formula, which in Spanish is “fórmula infantil,” not “leche deslactosada,” which translates to “lactose-free milk”:

Start your mornings full of energy and carry out your activities with motivation with the variety of nutritious products that your Walmart.com.mx online store has for you. We present the lactose-free milk of Alpura Lac Del, easily digestible milk with added vitamins A and D. It is perfect for your whole family to enjoy, either at breakfast or at dinner before bed.

Similar cartons marked with a brand name “Lala” appeared in the image, to the left. Lala.com.mx ‘s website indicated the company largely produced dairy products — again, not baby formula — on a version of the site translated to English by Google:

A viral Facebook post featured a photograph of Lac Del lactose-free milk, alongside an indignant and false assertion that “[there] was even pallets of formula” at a grocery store on an unnamed island in Mexico. As some commenters explained, the image did not show any pallets of formula. As others pointed out, the 2022 baby formula shortage only affected the United States for various reasons, none of which are related to Mexico producing its own. Despite being loudly and obviously inaccurate, the post was shared at a rate of thousands of times an hour on June 8 2022.