The viral message titled “Letter From a Florida Teacher” served as yet another example of xenophobic disinformation cloaked in the veneer of patriotism.

Most versions of the post, which originated as a chain email before migrating online, contain familiar right-wing tropes:

The email, first spotted online in 2013, appears to be taken without attribution from a passage in the 2012 self-published book “Totally Pissed Off: At Our Corrupt Progressive Unconstitutional Government” by Robert Bobeye Inabinette: 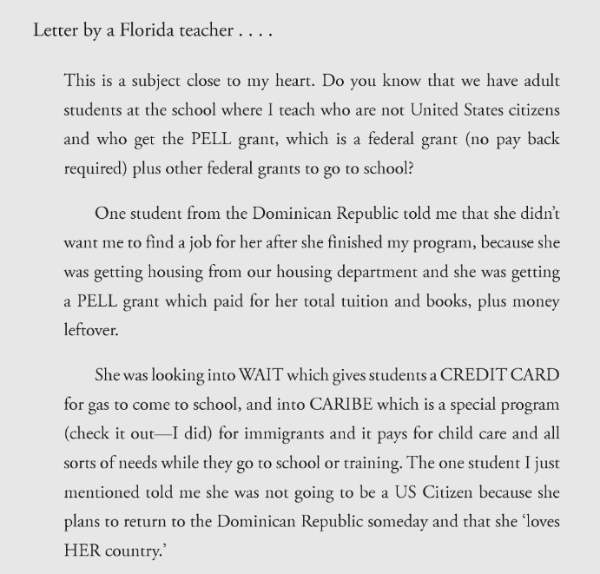 The “letter,” which is also presented without proof in the book and continues to linger online in perpetuity, is set up as an anonymous account of a conversation between the titular teacher and a “student from the Dominican Republic,” openly admitting to milking student aid benefits:

I just expect immigrants to come through like everyone else. Get a sponsor; have a place to lay your head; have a job; pay your taxes, live by the rules AND LEARN THE LANGUAGE as all other immigrants have in the Past –and GOD BLESS AMERICA!

The story hinges on three claims, which we will examine separately.

1. The “WAIT Program” provides students with a credit card to use for gas and other expenses.

Not true. The message claims that the student “was looking into WAIT which gives students a CREDIT CARD for gas to come to school.” But there is no evidence that any state program by that name exists at all, much less that it provides anyone with a credit card.

There are records of a program called “WAIT Training,” administered in 2011 and 2012 by a private organization, “Live The Life Ministries,” geared toward promoting abstinence to student populations (“WAIT” being short for “Why Am I Tempted?”). It did not, however, issue credit cards.

Not True. In this case, at least the program actually exists. But it is still badly misrepresented in the text.

According to the meme, the student is “into CARIBE which is a special program […] for immigrants and it pays for child care and all sorts of needs while they go to school or training.”

The CARIBE program — short for Career Recruitment and Instruction in Basic English — was established in 2002, and it does offer benefits for participants, including:

Free childcare is not among the listed benefits.

3. Non-Citizens are eligible for Pell Grants, but only use them while intending to return to their native countries.

The one student I just mentioned told me she was not going to be a U.S. Citizen because she plans to return to the Dominican Republic someday and that she ‘loves HER country.’

I asked her if she felt guilty taking what the U.S. Is giving her and then not even bothering to become a citizen and she told me that it doesn’t bother her, because that is what the money is there for!

It is true that non-U.S. citizens are, in some cases, eligible for federal student aid. The U.S. Department of Education website states:

Generally, you are an eligible noncitizen if you fall into certain categories, such as the ones listed below:

The website also debunks the idea that a student could easily game the system and use that aid only to turn around and leave the United States:

To qualify for federal student aid, certain eligible noncitizens must be able to provide evidence from [U.S. Citizenship and Immigration Services] that they are in the United States for other than a temporary purpose with the intention of becoming a U.S. citizen or permanent resident.

Falsely claiming to be pursuing U.S. citizenship in that context, then, could violate federal law.

In sum, this email is only marginally true from start to finish. It is best classified as weaponized propaganda.