A COVID-19 protester held a sign that said "muzzles are for dogs and slaves," alongside an illustration of a masked woman of color.

On May 18 2020, a photograph purportedly from a COVID-19 anti-lockdown protest began circulating, which showed a white woman holding a sign reading “muzzles are for dogs and slaves” alongside an illustration of a black woman wearing a mask or a face covering:

Inside the mind of white conservatives. pic.twitter.com/wflisE1mUX

In the above tweet, the woman is holding what appeared to be a box top with the image of the black woman on the left, and the “muzzles and slaves” verbiage on the right. The image was the first Google result for “slave mask,” and it led to a Wikimedia Commons page featuring a woman who was called Escrava Anastacia (“Slavewoman Anastacia”): 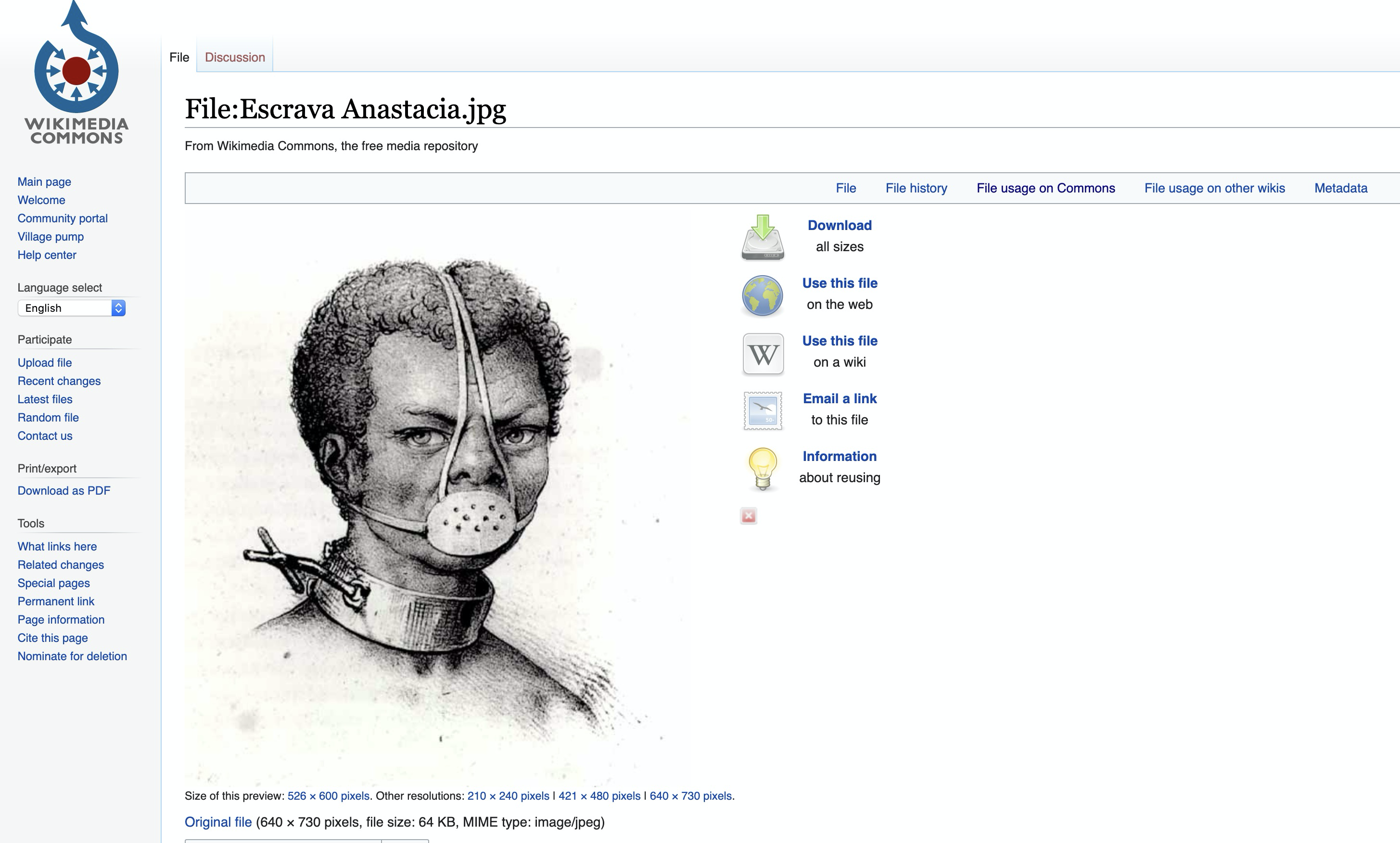 That same image was featured on the full page for Escrava Anastacia, who is an unofficial saint venerated in Brazil:

A slave woman of African descent, Anastacia is depicted as possessing incredible beauty, having piercing blue eyes and wearing an oppressive facemask. Although not officially recognized by the Catholic Church, Anastacia is still an important figure in popular Catholic devotion throughout Brazil. She is also venerated by members of the Umbanda and Spiritist traditions. She has also been portrayed in Brazil in books, radio programs and a highly successful television miniseries bearing her name.

That page goes on to say that Escrava Anastacia lacks an official history, and that the details of her life story vary but in all versions, “she is enslaved and cruelly treated by her owners” and “Anastacia stoically bears these traumas and treats all people with love.” According to that same Wikipedia page, she eventually died of tetanus:

Eventually, she is punished by her owners by being forced to wear a muzzle-like facemask, which prevents her from speaking, and a heavy iron collar. The reasons given for this punishment vary: some stories report her aiding in the escape of other slaves, others claim she resisted the amorous advances of her master, and yet another places the blame on a mistress jealous of Anastacia’s beauty. After a prolonged period of suffering, all the while performing more miracles of healing and peace, Anastacia dies of tetanus from the collar. It is often claimed that she healed the son of her master and mistress, and forgave their cruelty as she died.

In a section about the hagiography of Anastacia, the page emphasizes her portrayal wearing a mask:

While there are reports of black Brazilians venerating an image of a slave woman wearing a facemask throughout the late 19th and early 20th century, the first wide-scale veneration of the Saint began in 1968 when the curators of the Museum of the Negro, located in the annex of the Church of the Rosary of the Brotherhood of St. Benedict in Rio, erected an exhibition to honor the 80th anniversary of the abolition of slavery in Brazil. Among the displays was an engraving of a female slave wearing a punishment facemask. The image soon became the object of popular devotion and members of the Brotherhood began collecting Anastacia stories in the early 1970s.

As for the sign, it was real and unaltered. It appeared on May 16 2020 in two separate images attached to a post on KymKemp.com, and at :03 in this video. A woman shown in one photograph was identified as Larkin Small, 37:

Larkin Small said it was her first time ever coming to a demonstration and that this is what it took to get her out of her house at the age of 37.

For the more widely circulating version of a woman in sunglasses holding the sign, a caption read:

Gretha Stenger came out to stand with people who were deeply concerned about the Stay-at-Home orders and their repercussions.

The sign that Larkin Small and Gretha Stenger are holding made me nauseous. Although I do not agree with the position of this protest, I do support the right of people to raise their voices for something they believe in, but the blatant ignorance and racism that the sign reflects is outrageous. Equating enslaved African American with dogs, and humans being chained and muzzled with a mandate to wear masks–WTF???

The post itself covered a small May 15 2020 protest in Eureka, California, at the Humboldt County Courthouse. Some of the additional signs visible read:

An image of a woman holding a sign reading “muzzles are for dogs and slaves” at a COVID-19 anti-lockdown rally in Eureka, California was one of many similar signs from weeks of astroturfed and inauthentically organized and promoted demonstrations that have gone viral. Previous iterations included one urging leaders to “sacrifice the weak,” an anti-Semitic “the real plague” sign, Nazi imagery, and myriad iterations with poor spelling.

Update, May 19 2020, 1:37 PM: Stenger, one of the women depicted, provided a statement to a local news outlet after her “muzzles are for dogs and slaves” sign went viral, and claimed she did not make the sign herself:

“Holding that sign up at the lockdown protest was a grave mistake and I ask forgiveness from all those who I have caused pain. As I had no sign of my own, it was handed to me by another protester and a photographer took the picture before I considered the racist implications. My intent was to take a stand for the freedom of all human persons and I mistakenly held a sign that conveyed the opposite. Please know that I respect the dignity of all people and I sincerely regret any suffering it has caused.”

Stenger did not directly address several of the Times-Standard’s questions about the ongoing stay-at-home order or the equivalencies drawn between that and slavery.

The outlet was unable to reach Small for comment.