“I am not going to stand up to show pride in a flag for a country that oppresses black people and people of color. To me, this is bigger than football and it would be selfish on my part to look the other way. There are bodies in the street and people getting paid leave and getting away with murder.”

Kaepernick’s statement sparked plenty of debate about patriotism, the national anthem and athletes’ role in social issues. The debate also drudged up unproven rumors from July 2016 that Kaepernick had converted to Islam, and that his protest was in some way connected to his new faith.
Those rumors started after Kapernick posted a message from his official Istagram account wishing Muslims who had been fasting during Ramadan a “Happy Eid”: 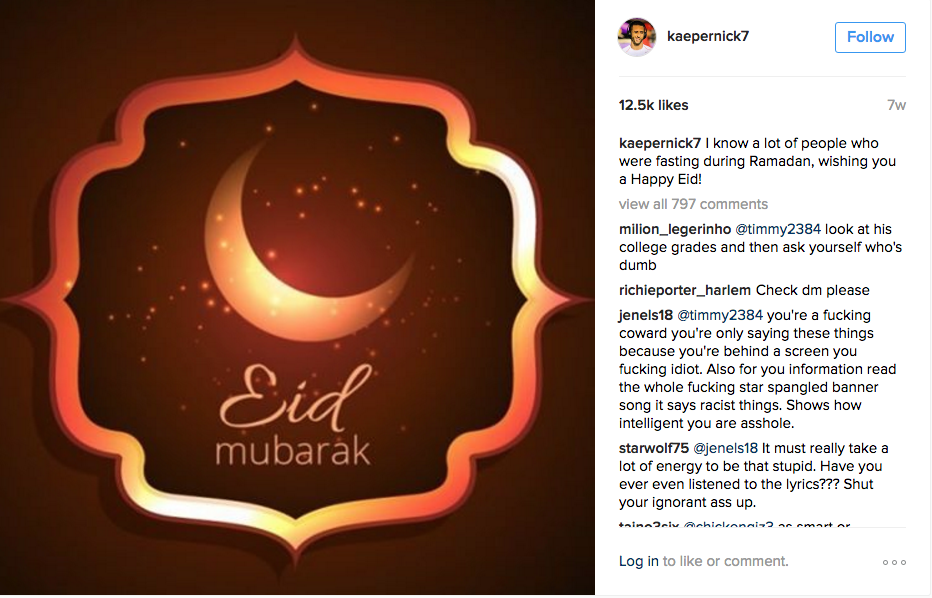 Kaepernick didn’t indicate that he himself had been fasting for Ramadan in the post, or that he had converted to Islam, but the post immediately sparked rumors that he had.
Infotainment websites like Media Takeout (MTO) News and the Terez Owens sports gossip blog reported that Kaepernick had converted to Islam, due in large part to his girlfriend, MTV host Nessa Diab.
These stories both credited unnamed “people close to the player” for their scoop, and it’s impossible to confirm of debunk unnamed sources.
It should be noted, however, that MTO News has an ambiguous disclaimer that states its stories are presented “as is” with no claim of truth or accuracy. And the Terez Owens story included photos in which Kaepernick’s head had been photoshopped onto the bodies of Osama bin Laden and an ISIS terrorist.
Nevertheless, these blog sites were cited as evidence that Kaepernick had converted to Islam by fringe websites like the Conservative Daily Post and the Conservative Tree House and Info Wars.
We couldn’t find any credible information about what religion, if any, that Kaepernick practices. That’s why we’re calling this one “unproven.”