This is a video of a very relaxed rabbit taking a bath in a sink. It was posted on YouTube and, thanks to social networking, has gone viral on the Internet. Viewers are asking if the video is real.

The Truth:
The video is real, and the rabbit’s name is Cloody. Its owners placed it into a hypnotic state to give it a bath.
The TruthOrFiction.com Team did some searching and found that there is a technique to put pet rabbits into a hypnotic trance, which comes in handy for trimming the animal’s nails or giving it a bath.
In the United Kingdom, according to an April 14, 2010, article by the Daily Mail, there is even a man whose claim to fame is Britain’s only “Rabbit Whisperer.” His name is Cliff Penrose, and the article said that he is “a master of the little-known art of hopnosis.” The Daily Mail said that Penrose guarantees his technique to keep a rabbit “in a trance, lying flat on its back with its paws in the air for up to ten minutes at a time.” 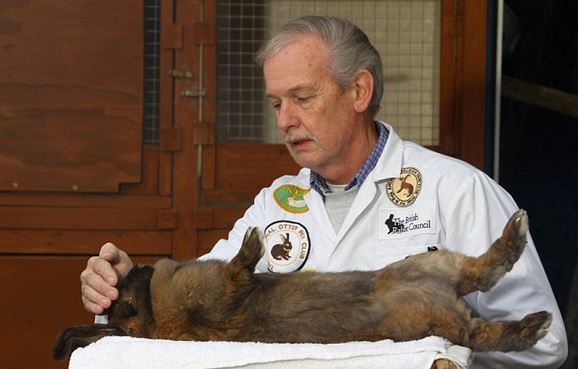 The technique is not really a secret, nor is it very difficult for pet owners to learn. It involves gently setting the rabbit on its back, on a soft surface, and making sure that its head is slightly lower than the body. This is followed by stroking its nose for a short time until the rabbit tenses up and goes into a trance. Once the rabbit is in a trance the pet owner can clip its nails, give it a bath or clean and treat a wound.
At this point it is important to keep an eye the rabbit because sometimes they can wake from the trance on their own.
The rabbit is revived by holding it firmly and gently turning it over.
A “how to” video was found posted on YouTube. Click here to watch video.
Posted 04/15/14