Summary of eRumor:
An email with the story and photos of a tiny deer named Rupert who was delivered by Caesarean section at a wildlife hospital after his mother was killed by a car.  The premature deer is being kept alive by incubators, expert care and is doctors expect him to make a full recovery.
The Truth:
This is a touching story of efforts to save the life of a newborn deer, but sadly, he didn’t make it, according to the Tiggywinkles Wildlife Hospital.  Tiggywinkles is a veterinary hospital that specializes in the rescue and rehabilitation of all species of wildlife in England.

The Tiggywinkles web site said a pregnant female Muntjac deer was admitted into to the wildlife hospital on September 20, 2008 after she was hit by a car approximately three miles away in Aston Clinton, Buckinghamshire in the South East of England.

After being treated for severe injuries and “despite expert care, her injuries were too severe and she would not recover from them, and so the vet decided the kindest thing would be to put her to sleep.   As her pregnancy was so far advanced, the decision was taken to give her unborn fawn a chance.”  Five days later the Rupert was delivered by Caesarean section. 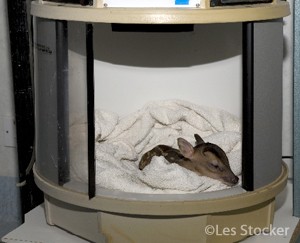 The baby fawn was determined to be about 2 to 3 weeks premature so he was placed in an incubator to be kept warm and provided fresh oxygen to aid in development.   All efforts were made to feed him after he refused to suckle from a foster doe and sadly the little fawn condition deteriorated and he did not pull through.

Click here for the Rupert story at Tiggywinkles Wildlife Hospital