Texas Gov. Greg Abbott deployed the State Guard in April 2015 to prevent a take over of the state by then-President Barack Obama as a joint military exercise called Jade Helm 15 got underway.

Whether ironically or not, a May 2015 NPR story fed into the conspiracy theories surrounding the “Jade Helm 15” training exercise in Texas that year.

You see, there are these Wal-Marts in West Texas that supposedly closed for six months for “renovation.” That’s what they want you to believe. The truth is these Wal-Marts are going to be military guerrilla-warfare staging areas and FEMA processing camps for political prisoners. The prisoners are going to be transported by train cars that have already been equipped with shackles.

Don’t take my word for it. That comes directly from a Texas Ranger, who seems pretty plugged in, if you ask me. You and I both know President Obama has been waiting a long time for this, and now it’s happening. It’s a classic false flag operation. Don’t pay any attention to the mainstream media; all they’re going to do is lie and attack everyone who’s trying to tell you the truth. 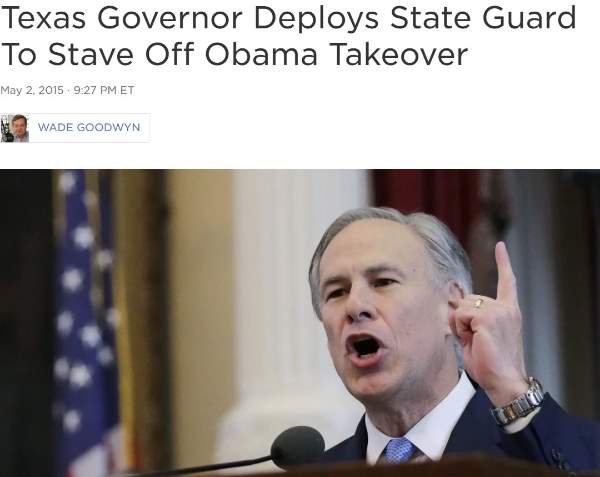 As we previously noted, conspiracy blogs egged on the idea that the exercise was part of then-President Barack Obama’s efforts to implement a “new world order.”

“During the training operation, it is important that Texans know their safety, constitutional rights, private property rights and civil liberties will not be infringed,” the letter read. “By monitoring the operation on a continual basis, the State Guard will facilitate communications between my office and the commanders of the operation to ensure that adequate measure are in place to protect Texans.”

According to Reuters, the Obama administration was “puzzled” by Abbott’s directive.

“I have no idea what he’s thinking,” White House spokesman Josh Earnest said at a press conference. “The thing that I can say without having a lot of detailed knowledge about the particular exercise is that in no way will the constitutional rights or civil liberties of any American citizen be infringed upon while this exercise is being conducted.”

Speaking to reporters days later, Abbott described criticism of the letter as an overreaction.

“What the letter did was quite simple and non-inflammatory, and I think that’s the way it should be construed,” he said at the time.

In May 2018 — three years after Abbott’s letter to Betty — former Central Intelligence Agency director Michael Hayden blamed “Russian bots and the American alt-right media” for stirring up tensions around the exercise, adding that Abbott’s letter asking that it be “monitored” only emboldened outside actors.

“At that point, I think they made the decision, ‘We’re going to play in the electoral process,'” Hayden told MSNBC.