A rumor that United States President Donald Trump “cracked down” on his predecessor Barack Obama’s “vacation scam” or sent the former president a bill for vacations that weren’t part of official state business reappears on social media periodically.

However, this story is nowhere near true. The rumor originated from repeat offender TheLastLineOfDefense.org, a self-described “satire” and hoax news site that relies on “facts that don’t necessarily exist” in its mock political reports.

The story, which appears under the headline, “BREAKING: Trump Just Ended Obama’s Vacation Scam And Sent Him A Bill You Have To See To Believe,” begins:

Before Obama left office he arranged with the State Department for a series of “official visits” to foreign countries spanning the next 20 years. Using discretionary funds from the Office of Presidential Visits and Vacations, Obama was able to weasel what would have been another $2.1 billion in free vacations for him and up to 24 members of his family plus staff and a dog sitter until the year 2036.

He would have, that is, had he not lost his office to Donald Trump. Trump, who is always looking for ways to save money, was having the office used for vacations repainted with 24 karat gold leaf trim and having the shelves lined with leather when he was presented with a ledger that contained all of the travel plans and expenses. The ledger was found by one of the 31 workers Trump hired from outside the typical White House staff to make alterations requiring specialized craftsmen.

This is simply untrue. There is absolutely no basis to the claim that former president Barack Obama had arranged $2.1 billion in vacations, or that Trump had “ended” Obama’s vacation “scam.” Rather, the entire report fits into the category of  “facts that don’t necessarily exist,” which appears in the site’s disclaimer. However, even though the original report was published in February 2017 with a disclaimer, by June of that year it was still being copied by other sites and circulated as breaking news without any disclaimer at all: 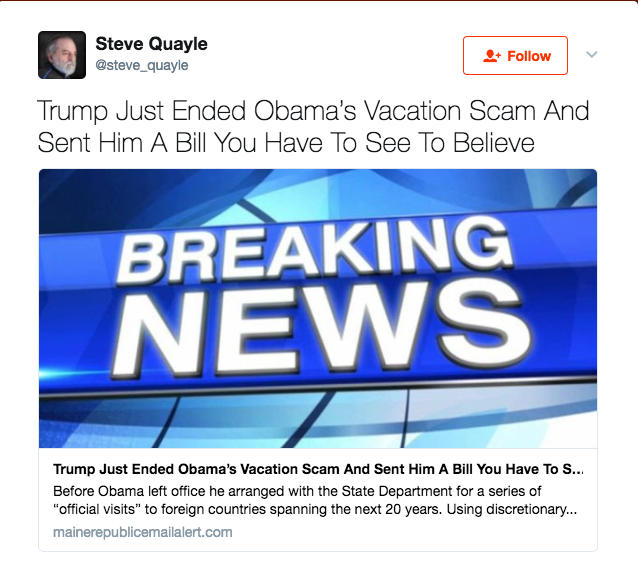 It has become something of a tradition for political commentators to levy claims about the vacation and work schedules of presidents from opposing parties before and during their time in office. We covered various rumors about President Obama’s vacation schedule during his time in office, and there had already been comparisons between Trump’s and Obama’s travel expenses within the first few months of Trump’s time in office.

However, the specific claim that Trump ended Obama’s vacation “scam” is nothing but pure fiction.