The decision by then-United States President Donald Trump to have the U.S. exit a United Nations program fighting climate change was, typical of his presidency, steeped in corrosive disinformation.

In a June 1 2017 speech in the White House Rose Garden, Trump announced that the U.S. would no longer contribute to the U.N.’s Green Climate Fund and no longer take part in the 2015 Paris Climate Accords, falsely claiming that they constituted an undue burden on the United States:

I cannot in good conscience support a deal that punishes the United States, which is what it does. The world’s leader in environmental protection while imposing no meaningful obligations on the world’s leading polluters.

For example, under the agreement, China will be able to increase the emissions by a staggering number of years – 13. They can do whatever they want for 13 years. Not us. India makes its participation contingent on receiving billions and billions and billions of dollars in foreign aid from developed countries. There are many other examples but the bottom line is that the Paris Accord is very unfair at the highest level to the United States.

Trump claimed — falsely — that the climate fund would require the U.S. to contribute “tens of billions of dollars,” for example. In reality, at the time of his speech the U.S. had only contributed $1 billion out of $3 billion that his predecessor, Barack Obama, had pledged to the fund; as NPR reported following Trump’s speech, a group of 43 countries had collectively in 2013 pledged $10.3 billion toward the fund.

Both NPR and the New York Times credited Trump’s decision to a familiar source for right-wing disinformation:

The decision was a victory for Stephen K. Bannon, Mr. Trump’s chief strategist, and Scott Pruitt, the Environmental Protection Agency administrator, who spent months quietly making their case to the president about the dangers of the agreement. Inside the West Wing, the pair overcame intense opposition from other top aides, including Gary D. Cohn, the director of the National Economic Council, the president’s daughter Ivanka Trump, and his secretary of state, Rex Tillerson.

The story got further muddled thanks to the Fox network, which aired a story about India, China, and Russia not taking part in the fund: 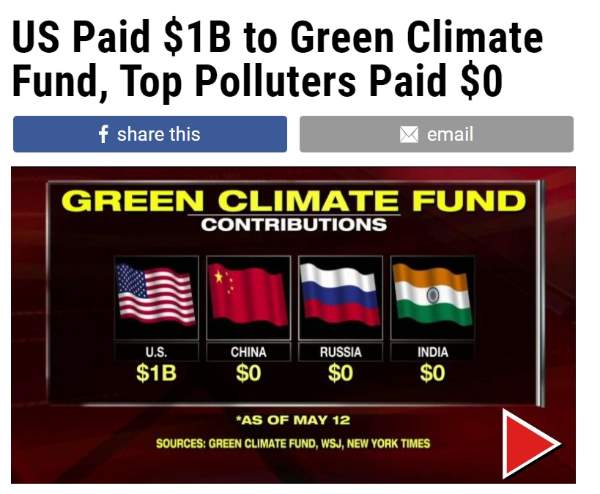 The implication was that because those three countries were not part of the U.N.’s fundraising effort, they were not taking action against climate change in general. As NPR noted at the time:

China has pledged to halt the growth in its carbon emissions by 2030, 13 years from now. But China is on to beat that target date by many years, according to the Climate Action Tracker. India is also ahead of schedule in meeting its Paris commitments.

The Chinese government has met with officials from the fund since Trump’s speech and signaled “future cooperation” with the group. And independent of both the fund and the Paris Accords, India had pledged to generate 40 percent of its electrical output from renewable sources. However as of April 2022, the Climate Action Tracker, which measures climate change policies on a country-by-country basis, currently has both India and China listed as “highly insufficient.”

Also it should be noted that as of April 2022, Russia was listed as a participant in the Green Climate Fund, having contributed $3 million to the project.

After beating Trump for the U.S. presidency in 2020, President Joe Biden said in a statement on January 20 2021 that the country would rejoin the Paris Accords, which became official less than a month later. In March 2022, Biden moved further in rolling back Trump’s policies, requesting $1.6 billion that would be devoted to the Green Climate Fund.