A manual explaining the anti-fascist ("Antifa") movement was found on the campus of Evergreen State College in Washington State.

The online spread of an “Antifa model” in August 2017 served as an example of how that term has been co-opted into a modern day bogeyman figure for right-wing outlets and social media users.

In this case, photographs of the “document” were first posted on “/pol/” a message board on 4chan — a forum notorious for fomenting right-wing and white supremacist content.

“Found this on the campus of The Evergreen State college,” the post read. “Not sure if real or satire. Will post the whole thing here for lulz.” 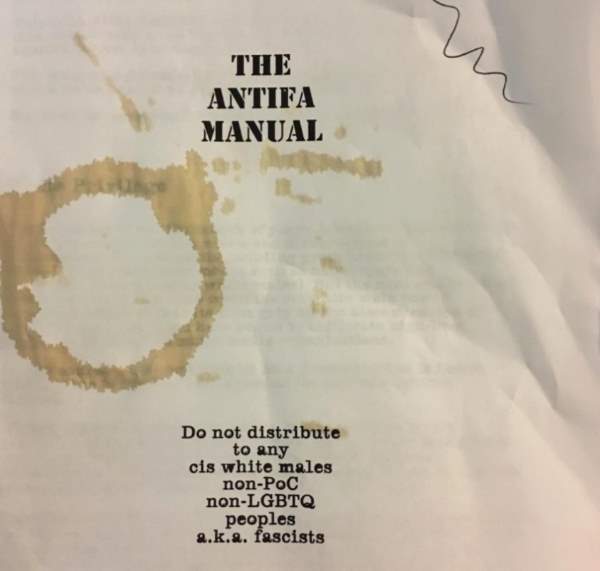 Evergreen State is a real college. But the “manual” was another episode in the forum’s shift from centering on pop culture to hoaxes like “Starbucks Dreamer Day” and the claim that Sen. Bernie Sanders drove a $180,000 car to his campaign rallies.

The site’s “politically incorrect” board, /pol/, home to nihilistic trolls and thrill seekers known as “edgelords,” helped spawn what cultural critic Angela Nagle, author of Kill All Normies, calls a “leaderless, digital counter-revolution.” Some lurkers sniffed opportunity. On Stormfront, then the most prominent white-supremacist website, several discussion threads considered how /pol/ might be used to help young people become “racially aware,” as one user noted. “People seem a lot more open there in some ways,” another observed, “probably because it is a completely anonymous board so they are not afraid of saying things that are racist.”

While regular posters initially resisted attempts to “redpill” them, Vice reported in November 2020, “/pol/” neither they nor moderators (referred to by site users as “janitors”) held back the incursion:

While other websites also host increasing amounts of violent and bigoted language, 4chan is an outlier even compared to other internet gathering places filled with similar ideologies. A Vice News analysis found that there was more hate speech on /pol/ than in the comments on one overtly Neo-Nazi site, the Daily Stormer. Mass murderers have posted manifestos on 4chan. White nationalists have used the site to coordinate protests.

When one Neo-Nazi group polled their supporters to discover how they came to the movement, /pol/ was tied for the most common gateway. Gab, another far right hotbed, contains about half the rate of hate speech as /pol/, and 4chan has 20 times more users. The only popular websites more toxic than 4chan are its much smaller offspring sites, like 8chan, now 8kun.

The “manual” was soon cross-posted to the photograph repository site Imgur (where at least one iteration remains active) en route to being recycled even more, first by fringe right-wing blogs and later on Facebook pages like “Rush Limbaugh Radio,” which has no affiliation with the radio host but continues to post content following his death in February 2021.

“If you want to know why the left calls President Trump and his supporters ‘Hitler’…it’s all here, inside this disgusting little manual,” the page claimed.

True to form, despite being a fake “manual,” the document continued to spread online. As the Anti-Defamation League noted in 2020:

The same images, originally published in 2017, are being reposted with the comment, “these pages were Dropped in Eugene on May 29, 2020 during a Riot.” A Telegram channel affiliated with the alt lite extremist group Proud Boys reposted images of the document. Alt lite conspiracy theorist Jack Posobiec also posted a screenshot of the purported manual on Twitter, commenting: “The Antifa Manual specifically instructs members to target Black Lives Matter and immigrant rights groups for infiltration. This is not random, it is their doctrine.”

While “Antifa” as a movement is not an organized group, Republicans (as well as platforms and news outlets friendly to them) seized on anti-fascists as a whole as a recurring target for demonization, with Donald Trump at one point in his presidency claiming that his administration would designate “Antifa” as a terrorist group.