Mexico erected a huge wall at its border with Guatemala.

In another facet of the years-long disinformation campaign against Mexico, right-wing bloggers not only (falsely) accused the country of contributing to “open borders,” but also (falsely) claimed it was being hypocritical in doing so.

Graphics and memes spreading online claiming to show a “wall” between Mexico and Guatemala date back to around 2013, predating even Donald Trump’s false boast that he would build a wall between the U.S. and Mexico, and make the latter country pay for it. The caption for one iteration reads:

This is the border fence Mexico built on their border with Guatemala to keep out freeloaders. Notice the barbed wire & towers with armed guards. Shouldn’t the United States have the same right as Mexico to protect its border? 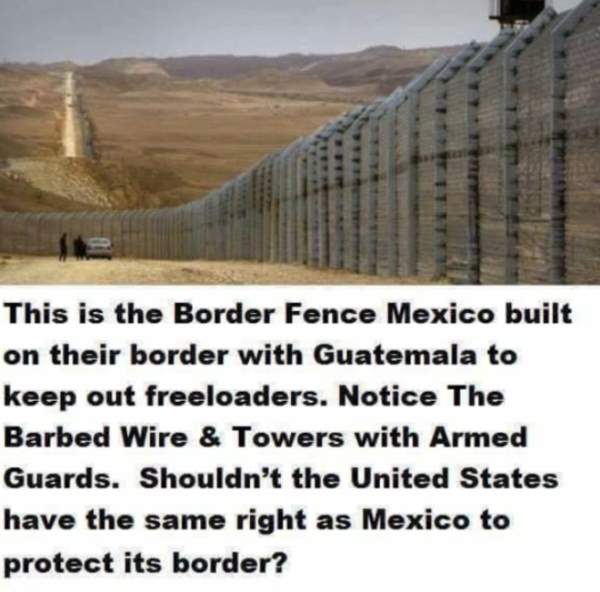 In reality the photograph, originally published by the news agency Agence France-Presse (AFP) and reprinted by other news outlets, shows the border between Israel and Egypt: 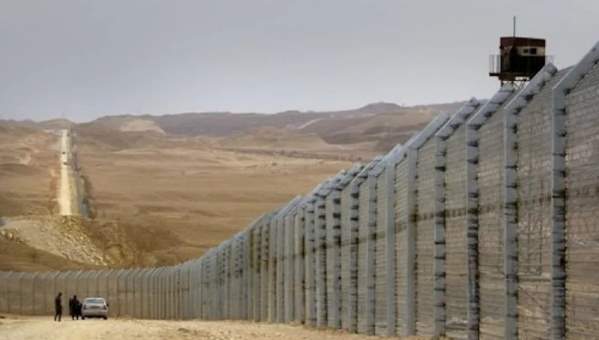 In its own analysis, AFP confirmed that one of its photographers, Ahmad Gharabli, originally took the photo in 2012. The actual caption read:

Egyptian border guards (R) observe from a watch tower as their Israeli counterparts supervise the construction of a border fence along Israel’s border with Egypt near the Red Sea resort town of Eilat.

Another version (showing a different wall) repeats the claim that it separates Guatemala and Mexico, adding:

Imagine that? I guess it is not racist for Mexico to build a wall to keep Guatemalans out.. 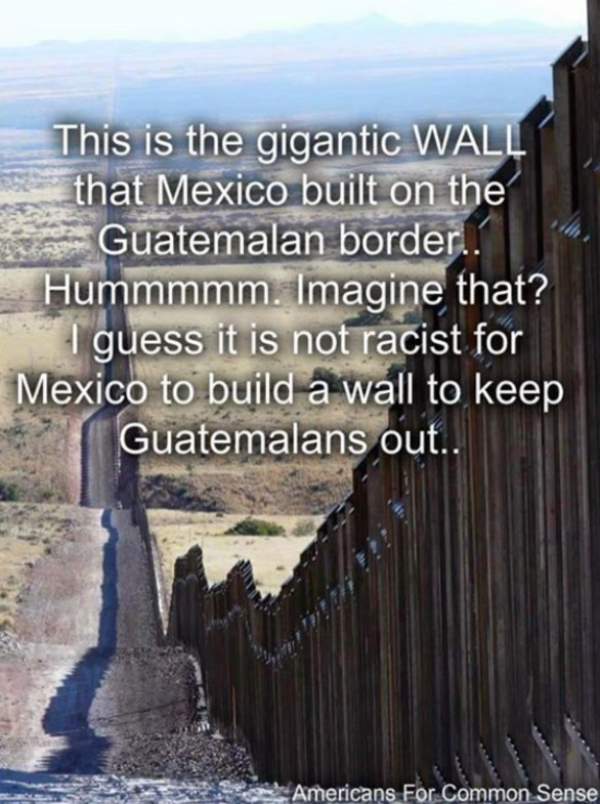 In reality, the photo showed part of the 640-foot border fence between Mexico and the U.S., and was first published in 2013 in a blog post for the animal conversation group Defenders of Wildlife. Matt Clark, who took the photo, wrote:

I once spotted and photographed a family of javelinas on the U.S./Mexico border near the San Pedro River in southeast Arizona. Through my camera lens, I watched the silhouette of an adult javelina cautiously approach the ominous border wall, and stop with a grunt. It was a haunting image. I can’t pretend to know what natural instinct brought the javelina to the border that day, but seeing those wild creatures literally cut off from their habitat by a steel wall stretching on for miles beyond sight – it really stuck with me.

Yet another iteration (misspelling “Guatemala” as “Guadamala”) spotted by WFMY-TV in 2018 also originated in Israel: 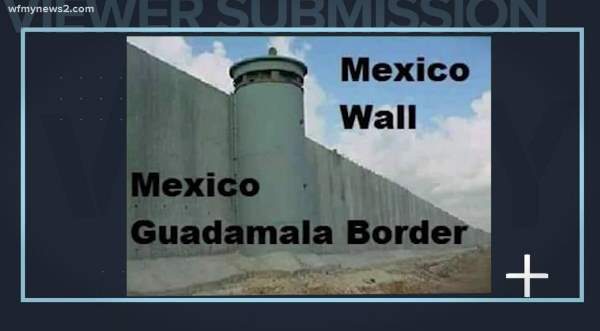 This version of the meme was actually a darkened version of a photograph first published in 2003 by the blog Electronic Infitada showing a portion of the country’s “separation barrier” errected at the West Bank.

In reality there is no wall separating Mexico and Guatemala; there are ten formal border crossings between the two countries. Neither is it true that Mexico refuses to stop undocumented immigrants from entering the country en route to the United States; as far back as 2015, Mexico — under encouragement from the U.S. — was deporting people in record numbers. As The Guardian reported, the increase was part of the Plan Frontera Sur initiative:

It helped prevent a staggering 9,661 Honduran and 7,973 Guatemalan children from reaching the US – more than double compared with 2013. Almost 11,000 unaccompanied children, including 1,853 aged 11 or younger, were also apprehended by Mexican authorities.

Mexican officials say the new crackdown is designed to retake control of the historically porous southern frontier and protect migrants from transnational crime groups. But the measures have been widely attributed to pressure from the Americans, who do not want a repeat of last year’s crisis which clogged up the immigration courts and saw tens of thousands women and children crammed into detention centres at the border.

Disinformation and fear-mongering about Central American immigrants surged during Trump’s presidency, as they were portrayed as violent and spoiled, a disinformation practice that has continued into 2022.