Drinking Jones Juice May Cause You to Fail a Drug Test-Fiction!

Summary of eRumor:
An email claiming to be from a “Lt. Col. Hayes” warns not to drink Jones Juice, a new soft drink that contains hemp seed oil.  Because hemp contains the active ingredient of marijuana, anyone drinking Jones Juice could test positive in a urine test for drugs.  The email says it is illegal for military members to drink the stuff, so they should avoid buying it.  The email is accompanied by a picture warning as well.. 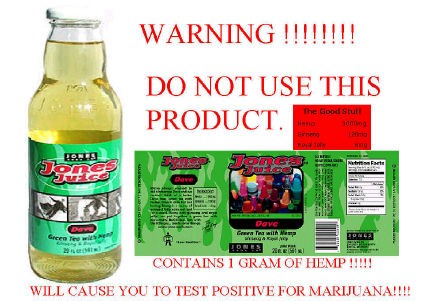 The Truth:
According to the soft drink manufacturer’s website, this is not true.  There are several Jones Juice products, but the drink with hemp seed is called “DAVE.”   The manufacturer says there isn’t enough of the substance that is measured in drug tests (THC) to cause a positive result.  They also cite a research study that concluded that the consumption of hemp in food products did not ordinarily cause people to fail drug tests.  Additionally, TruthOrFiction.com has not found any evidence of “Lt. Col. Hayes” or that it is illegal for military personnel to drink the product.
For more information: www.jonessoda.com