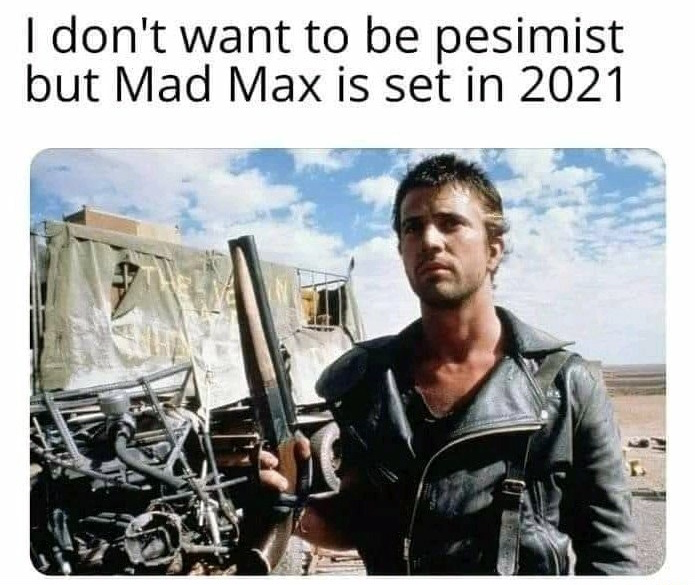 It wasn’t clear where the combination of image and phrasing above appeared originally, but it was shared to iFunny in October 2020 with the “I don’t want to be pesimist but Mad Max is set in 2021” phrasing and spelling error intact. On December 19 2020, another variation was shared by Twitter user @RitaGamer; that particular version specified that Mad Max 2 was set in 2021:

Background context for the commentary was a social media consensus view that the year 2020 was chaotically unpleasant — which spawned 2020 memes (in general), 2020 complaints, and the concept of “2020 bingo.”

Instances in which the meme manifested (and occasionally influenced the news cycle) were recurring claims that an asteroid was headed toward Earth, a similarly irrelevant deluge of posts about “cannibal nuclear ants,” and at least two viral stories about purportedly magical events.

Circulating claims about Mad Max being set in 2021 weren’t even the first film-based variants on “2020 bingo” memes. In June 2020 a rumor claimed V for Vendetta was set in 2020, another claimed that Jeepers Creepers‘ titular monster was scheduled to rise again in 2020, and the manga series Akira was said to have foretold events in 2020.

We should probably say before we go any further that these were rarely true without at least some creative reinterpretation.

A version of the “Mad Max was set in 2021″ meme seen above included an image of a young Mel Gibson, and it was featured in the Getty Images archive. Archive information says that the still was from 1981, taken on the set of Mad Max 2: The Road Warrior. That film was released on December 24 1981, as a sequel to the original Mad Max.

According to the Fandom Wiki for the Mad Max franchise, neither Mad Max nor Mad Max 2 were set in 2021. The “Timeline of events” entry noted that the chronology was “assembled from various interviews with the creators of the movies, official documents & other legitimate sources”:

According to the dates provided by production documents and movies themselves, the original trilogy starts in mid 1980’s and ends in 2005.

Canonically speaking, Mad Max was set in the early- to mid-1980s. That very specific image of Gibson was from the second film, which was also set in the 1980s.

A December 2020 version of the claim on Twitter did not include an image, and could be molded to claim that the reboot Mad Max: Fury Road was set in 2021 — in fact, following the logic of the 1979 original being set in or around 1984 and 1985 and Fury Road‘s 2015 release, extrapolated math appeared to initially suggest it worked.

As previously mentioned, Mad Max: Fury Road is difficult to situate exactly in the context of the original trilogy. It’s clear that the movie takes place after the events of Mad Max: Beyond Thunderdome, according to the prequel comics. It’s also clear from Max’s appearance and behavior that at least some notable time has passed, as he is even more primal, silent and animalistic than he is at the end of the third movie. Given a few references to the amount of time since the war, and the real-life references in the comics, the fourth film likely takes place around 2050.

A meme captioned “I don’t want to be [a pessimist,] but Mad Max is set in 2021″ spread on social media as an indirect commentary about the year 2020 and its relentless stresses and tragedies, implying that if Mad Max was any indication, 2021 was unlikely to be better than the year before. However, Mad Max and Mad Max 2 were set in around 1984 and 1985, not 2021. As for the reboot Mad Max: Fury Road, that film was likely set around the middle of the century, in 2050 — again, not 2021.