The Veteran Administration (VA) Medical Center in Dallas, Texas refused to allow children to hand out Christmas cards to patients because they contained religious content.

In an especially egregious bit of holiday-related disinformation, a right-wing Fox News personality published a claim that debunked itself.

The claim stemmed from a December 2013 op-ed by Todd Starnes, who accused the federal Veterans Administration (VA) hospital in Dallas of refusing to take Christmas cards from students from a local “Christian” school. Starnes based his column on a story from the local Fox affiliate, saying:

On Monday morning the boys and girls were planning on hand delivering the cards to the wounded veterans. Chapman called the hospital to make final arrangements and that’s when she learned there was a problem.

“I told him my students made cards, we’d like to bring them down for the veterans,” Chapman told the television station. “And he said, ‘That’s great. We’re thrilled to have them, except the only thing is, we can’t accept anything that says ‘Merry Christmas’ or ‘God bless you’ or any scriptural references because of all the red tape.'”

As often happens, the claim recirculated through right-wing forums and social media: 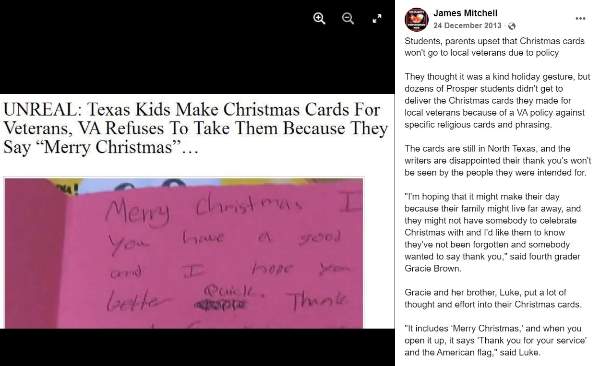 It should also be noted that Starnes did not report on the original incident; he instead linked back to a story from the local Fox affiliate, which is no longer available. As blogger Kim Noble reported at the time, Starnes neglected to mention that the VA policy would never have stopped the veterans from receiving any cards, religious or otherwise:

In order to be respectful of our Veterans religious beliefs, all donated holiday cards are reviewed by a multi-disciplinary team of staff led by Chaplaincy services and determined if they are appropriate (non-religious) to freely distribute to patients. After the review is complete, the holiday cards that reference religious and/or secular tones are then distributed by Chaplaincy Service on a one-on-one basis if the patient agrees to the religious reference in the holiday card donation. The holiday cards that do not contain religious and/or secular tones are distributed freely to patients across the Health Care System. We regret this process was not fully explained to this group and apologize for any misunderstanding.

Noble also pointed out that Starnes also claimed — falsely — that students at a school in Georgia were barred from performing Christmas carols at a local VA hospital. He wrote:

Once again, the VA is not banning religious expression or speech from the hospital, they are just trying to ensure that vets who don’t want to listen to the carols don’t have to. The kids could sing carols, but only in a chapel, for vets who actually wanted to hear the songs. Why did Starnes knowingly omit this fact? Because it contradicts his headline that the songs were “banned” and that claim that the students had to comply with a government approved song list.

A 2015 analysis published in The Atlantic recounted not only Starnes’ proclivity for disinformation, but also his fondness for hateful rhetoric:

Starnes has suggested on multiple occasions that Obama is secretly gay. He implied on Facebook that devastating floods in Washington, D.C. were God’s retribution for the Supreme Court’s decision legalizing gay marriage. And he said that Jesus would “thank” the gunman depicted in American Sniper for killing Muslims and sending them to “the lake of fire.”

Why would Fox News continue letting someone with such a long history of journalistic misconduct and bad behavior operate under its banner and with its backing?

The answer seems to be that while Starnes may not be a household name, his message resonates with one of Fox’s key demographics: older, white Christian conservatives.

Fox did not cut ties with Starnes until October 2019, after he claimed on his syndicated radio show that Democrats did not worship the Christian god but instead prayed to the pagan deity Moloch.

“May your organization or church group visit VA hospitals over the holiday season to sing Christmas carols for our Veterans? Sure. What about the Jewish, Muslim and other faiths? You are welcome,” the VA’s website states. “May you donate cards and gifts if they have a religious message? Of course. You’ll need to check with the hospital first to coordinate your visit.”