The role of weaponized disinformation campaigns in the January 2021 attempted coup at the United States Capitol was the main topic at the second January 6 Committee hearing about the events that culminated in a violent insurrection.

The House select committee’s June 13 2022 public testimonials focused mainly on recounting the behavior of former U.S. President Donald Trump and his colleagues over the results of the 2020 general election when it became clear that the Trump administration was losing his re-election bid.

Witnesses such as former United States Attorney General William Barr and former aide Bill Stepien and Jason Miller described an atmosphere of rising panic and refusal to look at the reality of Trump’s election loss among many of Trump’s associates, particularly Peter Navarro, Sidney Powell, and Rudy Giuliani — who, according to witnesses, was visibly intoxicated when he urged Trump to declare victory on election night:

“The mayor was definitely intoxicated, but I do not know his level of intoxication when he spoke with the president,” Jason Miller, a senior adviser on Trump’s reelection campaign, said during his videotaped deposition played by the committee.

Mayor Giuliani was saying we won it, they’re stealing it from us, where’d all the votes come from, we need to go say that we won. And essentially, that anyone who didn’t agree with that position was being weak,” Miller said.

Stepien said he strongly urged Trump not to declare victory. But Giuliani eventually got to the president. And Trump overruled his advisers.

“My recommendation was to say that votes were still being counted, it’s too early to tell,” he said. “The president disagreed with that. He thought I was wrong. He told me so.”

Trump ended up declaring victory early the next morning, despite the uncertainty of the election results that were in the process of giving way to the reality of his unmistakable loss:

“A very sad group of people is trying to disenfranchise [people who voted for me] and we won’t stand for this,” Trump told supporters in the White House shortly before 2:30 a.m.

More than an hour earlier, Democrat Joe Biden told supporters he’s confident about winning the presidential election and urged Americans to be patient.

In his East Wing comments, Trump said: “We were getting ready for a big celebration. We were winning everything, and all of a sudden it was just called off.”

“We’ll be going to the U.S. Supreme Court, we want all voting to stop,” Trump continued more than an hour after the final U.S. polls closed in Alaska. “We don’t want them to find any ballots at 4 o’clock in the morning and add them to the list.”

Weaponized lies clearly intended to set the stage for undermining the results of the presidential election had been circulated for months ahead of November 2020, along with highly corrosive and inflammatory agitprop:

As the corrosive claims propaganda purveyors and well-known sites make continue to be faithfully debunked by increasingly exhausted and slimed fact-checkers, debunkers, and other journalists, a new disinformation narrative has emerged. This is characterized by the discussion of a new civil war not just as a possibility but an inevitability, ascribed to a shadowy and nebulous “global Left” or the pejorative “Democrat Party.” They appear on Facebook and Instagram, WhatsApp and Twitter, Telegram, Gab, MeWe, and other, more esoteric social media sites.

Many are in the forms of commentary, but others are calls to action.

From this bubbling cauldron of disinformation emerged old Kremlin-style conspiracy theories, as Trump’s team cast about for reasons for his loss….

Trump told Donoghue that "Indians are getting paid to vote"
There's lots of fraud going on here, Trump replied.
Donoghue told him "flat out' the allegations didn't "pan out."
Trump was getting bad, false information.

Long-circulated (and long-debunked) weaponized conspiracy theories, some years old, were also massaged, edited, and called back into service, such as the well-worn chestnut of “illegal votes” cast fraudulently en masse for Democratic Party candidates:

Stepien said there were reports of thousands of illegal votes in that state and someone had “thrown out that claim to President Trump.”

Stepien asked others to look at the claim, and the response he received was that there was nothing to it. The votes, he said, were from overseas, not illegally cast.

U.S. Rep. Zoe Lofgren, who was running that part of the hearing, said Trump was frustrated by the response and replaced the legal team.

That claim went on to motivate Trump supporters in Arizona and beyond to push another initiative called “Stop the Steal,” which was enthusiastically picked up and pushed by foreign influencers, according to social media analysts Graphika:

The newly-identified activity discussed in this report shows that suspected Russian actors retooled and doubled down on efforts to target far-right American audiences after their previous activities were disrupted ahead of the 2020 U.S. election. The actors’ continued presence on alternative platforms that lack rigorous policies on foreign interference has also allowed them to create a direct line to these communities, through which to deliver a stream of tailor-made political content. The sometimes skeptical reaction they received, however, and a failure to achieve significant traction illustrates the operators’ long-standing struggle with content quality and authenticity.

In our own analysis of this particular attempt to sway the election in Donald Trump’s favor, or at least introduce enough chaos and doubt into the minds of Americans to destroy their faith in democratic insitutions such as the electoral system, we noted that “stolen election” narratives appeared to be getting particular boosts from foreign influence and interference agents:

….the content did not pressure nor encourage Americans to behave in any particular way, instead focusing on disseminating crude but effective political cartoons about various public figures in the service of weaponized narratives, such as “Stop the Steal” and the disinformation-driven “audit” of ballots in Arizona’s Maricopa County: 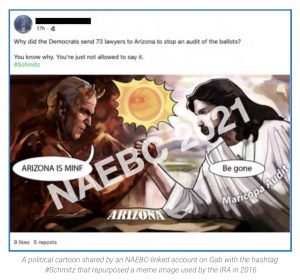 In that way, operatives provided a counterpoint of sorts to the drumbeat of plans that were coalescing into what became the Capitol attack. However, this particular network did not post about those plans directly. The content appeared on sites such as TheDonald.win, Gab, and Parler before it was shepherded into the mainstream….

The June 13 2022 statements in their aggregate painted a picture of a president who was not just detached from reality, but one who had, in former U.S. Attorney General William Barr’s words, “never had any interest in what the actual facts were” to begin with.

“There was an avalanche of all these allegations of fraud that built up over a number of days,” Barr said, describing himself as “demoralized” by Trump’s eagerness to seize on conspiracy theories to justify staying in power, which he described to the committee as “completely bogus and silly and usually based on complete misinformation”:

Claims that the voting machines of Dominion Voting Systems had been tampered with were woven into one of the biggest conspiracy theories to come out of the 2020 election. Dominion later sued Fox in a $1.6 billion defamation suit that is still pending.

Even before the polls closed on Nov. 3, Trump had discussed the potential voter fraud, and for weeks after he floated various allegations of how the election was “stolen” that were eventually debunked. Of all Trump’s allegations, Barr found those related to Dominion the most disturbing.

“Disturbing in the sense that I saw actually zero basis for the allegations,” he said, “but they were made in such a sensational way that they obviously were influencing a lot of people.”

Barr added that he told Trump that the allegations were “bullshit.” It made no difference, he said. In late December 2020, Barr resigned from the Trump administration.

Donald Trump also used election lies to fundraise for a nonexistent political action committee, the “Official Election Defense Fund.” He raised $250 million through that nonexistent fund, which he then funneled to his existing Save America PAC instead of channeling it into litigation, as promised:

“Not only was there the Big Lie, there was the Big Ripoff,” said Rep. Zoe Lofgren (D-Calif.) near the end of the Jan. 6 committee’s second hearing in laying out how the Trump campaign scammed money from supporters over false claims of election fraud.

The Trump campaign sent “millions” of emails to Trump supporters about how they needed to “step up” to protect election integrity, according to the Jan. 6 committee. The money would go to the so-called the “Official Election Defense Fund” — which doesn’t appear to have actually existed, according to testimony.

The fund — which, again, did not actually exist — raised $250 million, most of which did not go to election litigation, but to Trump’s newly created Save America PAC. The PAC then made contributions to Mark Meadows’ charity, to a conservative organization employing former Trump staffers, to the Trump Hotel Collection, and to the company that organized the rally that preceded the attack on the Capitol last Jan. 6.

The next televised hearings are expected to further detail disinformation and pressure campaigns to reinstall Donald Trump in power — over the wishes of a clear majority of American voters.